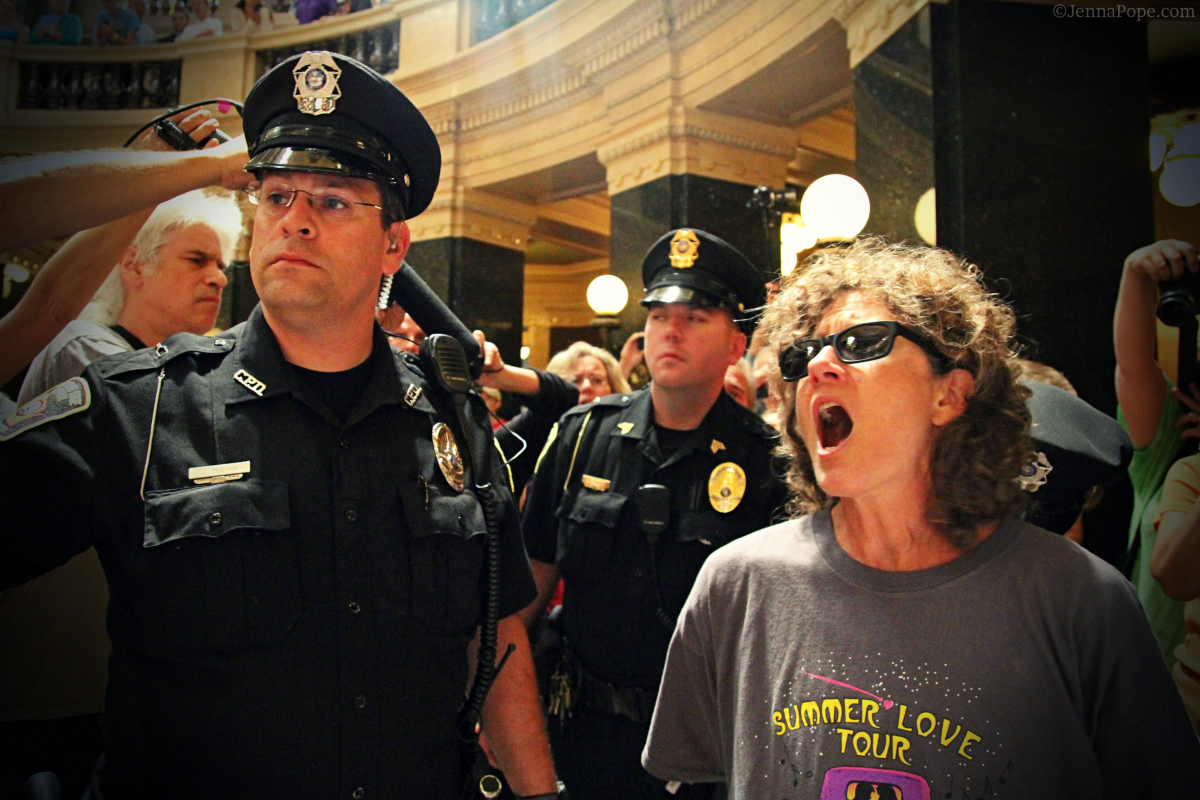 By August 19, 150 people had been arrested for singing their protests in Wisconsin’s Capitol. Photo: Jenna Pope.

Update: More arrests, and Governor Scott Walker has a new strategy: pack the Rotunda with his own supporters.

The middle-aged man was just an onlooker, on his lunch hour in the Wisconsin Capitol rotunda. He’d been watching a crowd of 100 people singing when two police officers held up a powerful “long-range acoustic device” (also used to ward off pirates off the coast of Somalia) and the recorded voice of Capitol Police Chief David Erwin—Governor Scott Walker’s former bodyguard—echoed through the dome:

“I have determined that your group does not have the required permit. I am declaring this an unlawful event…If you do not [disperse], each participant is subject to arrest.” (VIDEO)

A woman in an Ian’s Pizza T-shirt pointed to her husband—a retired chief petty officer in full Navy whites, half a dozen medals hanging from his jacket pocket.

“I don’t think they’re going to arrest him,” she said.

He had come to the rotunda not to sing but to support—he’d been upset by TV news video of a Veteran for Peace arrested and escorted out of the sing-along.

March 11 is the date Governor Scott Walker signed the union-killing Act 10 into law. And for an hour every weekday since, a progressive voice shakes the dome. (Except Fridays, when the singing happens outdoors, with string bands.)

What is it now with Wisconsin?

A kind of lyrical “Wisconsin UpriSING” has become the daily successor to the 100,000-strong rallies of February and March 2011. (VIDEO)

There is no “skipper,” despite the Navy whites. No conductor. The people come, on their own, to say that Walker is not governing the Wisconsin they thought they knew.

The Walker administration in December 2011 created rules requiring that groups of four or more wishing to have an event in the rotunda must obtain a permit from Capitol police, pay for any additional required monitoring, and accept possible liability for damage, including in some cases advance insurance.

But the sing-along has no legal or group structure, so there is no one to seek a permit. Moreover, the peaceable gathering is respectfully unamplified, delivered when Capitol offices are closed for lunch, and expressive of protest about ongoing legislative issues. The singers have argued this kind of protest is protected by the First Amendment and by Wisconsin’s constitution.

A few weeks ago, a federal judge declared unconstitutional the rule that limits rotunda rallies to four people, in an ACLU lawsuit filed on behalf of a University of Wisconsin employee who couldn’t get an answer about when he could legally sing. When the judge offered advice that permits might be applicable to rallies of more than 20, the police promptly began their crackdown, on July 24.

The first day they nabbed the 80-year-old retiree with her husband, 85. News photos flashed across the nation. (VIDEO)

By August 19, police had arrested more than 150 people.

The very first sing-along was called by Wisconsin Peace and Justice Network coordinator and math instructor Steve Burns, who felt sure that the massive crowds who'd chanted and sung in the rotunda in winter 2011 would want a continuing outlet to protest and petition the government after the legislation was signed.

One musician “localized” the chorus of “This Land is Your Land” to Wisconsin—to feature Lake Geneva, Madeline Island, rolling prairies, and lovely dairies, in place of California and the New York islands—and this incarnation of Wobbly corner sing-alongs was off and singing.

During its two-and-a-half years, the sing-along has grown to a “gentle-angry” variation on the sit-down strike. A “sing-out strike,” once a day.

Singers are petitioning their government in a space constructed just for that purpose. Judge William Conley’s recent injunction acknowledged this special history:

“The Capitol rotunda is closer to an out-of-doors, traditional public forum…with a unique history as a place for government and public discourse, which…was designed for a certain level of disturbance that would not be proper in a typical state office building.”

A trial to determine the precise constitutional boundaries is scheduled for January 2014. In the meantime, there is no end in sight (or hearing) to the unharmonious arrests.

THEY HAVE THEIR REASONS

Each singer—in a changing cast of hundreds—seems fluent on her or his reasons for singing out. Among the issues that circulate:

Add to this the umbrella organization called the American Legislative Exchange Council. ALEC’s right-wing fingerprints are on many of these “reforms” in Wisconsin law.

Legislators have refused requests to produce ALEC communications, as they are obliged to do under the state’s comprehensive public information laws. Madison’s Center for Media and Democracy has broken open many of the gates that ALEC-bought legislators have constructed to keep the public out of politics, helping to suffuse the singers with rare and accurate information.

In 2012, sing-along participants were instrumental in leading protests against the mining bill. It failed by one vote—a victory. (But in 2013, the Republicans passed the law.)

The sing-along has grown independently of any institutional union presence. A third of the singers on any recent day are active or retired union members, coming from AFSCME, Teamsters, Electrical Workers (IBEW), plumbers, musicians, and the National Writers Union. The most avid union participants have been Madison teachers.

The Writers Union just passed a resolution at its convention, pointing out lightheartedly, “Whereas this land is our land and there is power in a union and it is important to keep our eyes on the prize, not letting nobody turn us around...” (Download the full resolution here.)

Wisconsin AFL-CIO President Phil Neuenfeldt and many other union leaders have come to sing and receive a round of cheers, but the sing-along participants have also been highly critical of the state's unions and the Democratic Party for failing to more broadly consult progressives last year when selecting a candidate to run against Walker in a recall election.

Many singers, whether at brief pronouncements at sing-alongs or in blog posts (a dozen singers regularly post on blogs), expressed a preference that a hero of the Uprising—a new voice—be presented to the public.

Primary voters instead selected a milquetoast candidate, Milwaukee Mayor Tom Barrett, who had run against Walker before. He was again beaten handily.

The sing-along fists go up high to the tune of "We Don't Want Your Millions, Mister," on the verse that goes "take those two old parties, Mister, no difference in them I can see. But with a real progressive party, we could set the people free!"

August 15, Marty Beil, the executive director of Wisconson's AFSCME Council 24 (which includes State Capitol Local 1, which began AFSCME in the 1930s) posted to Facebook: “These brave women and men … have become part of our history. They have assembled every day since March of 2011. It’s time for union members and leaders, public and private sector, to join in and vocally and visibly speak out. It’s time for union shirts and union songs.”

The man on lunch hour and his wife watched as a friend was handcuffed and escorted out of the rotunda. She began to cry. “Fascist,” she said to nobody in particular.

The couple watched Capitol police surround a 70-year-old Vietnam veteran (a member of Veterans for Peace), handcuff him, and hurry him out through a dark hallway.

As they turned a corner, the handcuffed man fell, landing on his back on the marble steps. Police lifted him to his feet, still handcuffed. The man ended up going to the hospital by ambulance. (He was released later, no broken bones.)

It wasn’t the first time an ambulance had been called. The previous week, a retired Lutheran minister with a heart condition suffered cardiac distress while handcuffed and in custody. He spent the night in the hospital, but vowed to continue speaking out against the Walker administration.

After another major episode of arrests August 26, attendees at a huge sing August 27 included "cops for labor" and even the county sheriff.

The administration has vowed to continue the arrests.

Meanwhile the sing-along regulars let their captain-less ship of solidarity float into the rotunda each day—propelled not by a current, but by current events.

They drop anchor for an hour, belt out their protest, then slowly drift away. But not before the Capitol Police, in spiffy new uniforms and hats that cost the price of about 100 citations at $200.50 each, haul away more singers to the basement. The remaining circle sings: “May the Circle Be Unbroken.”

Greg Gordon is a computer programmer who sings at the sing-along and blogs as Giles Goat Boy. Jonathan Rosenblum, an attorney and writer (National Writers Union Local 1981), has also written for the Center for Media and Democracy. He helped draft the resolution, and sometimes plays second fiddle (if that) at the Friday sing-alongs. Download the Solidarity Sing-Along Songbook here.

Correction: A sentence in this piece has been amended to more accurately describe Steve Burns's motivation for calling the first sing-along.

A version of this article appeared in Labor Notes #414, September 2013. Don't miss an issue, subscribe today.
Related
TV Review: The Class Struggle at Superstore »
Rest in Power, Anne Feeney (1951-2021) »
TV Review: The Simpsons Strike—‘They Have the Plant but We Have the Power’ »
How Milwaukee Teachers Beat Back Cuts and Busywork »
Viewpoint: Unions Are Class Organizations, and Should Act Like It »