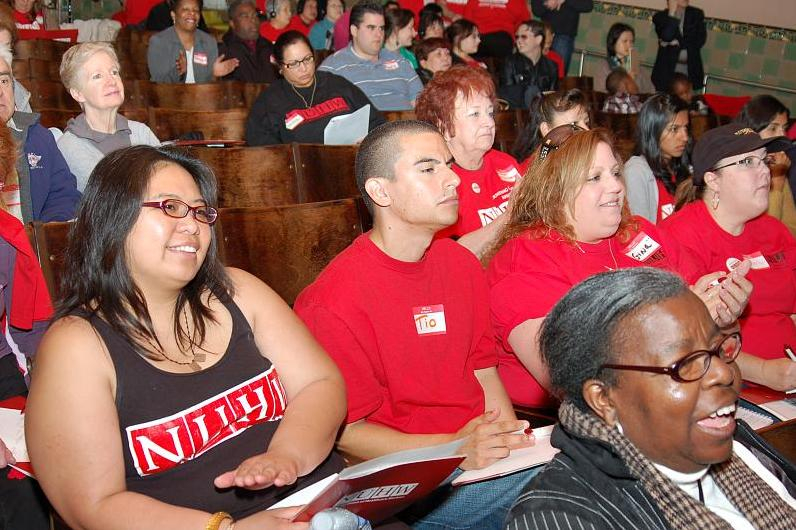 NUHW held its founding convention in April 2009. After SEIU sued, the courts assessed fines against leaders of the breakaway union, using reasoning more appropriate to a business with a branch location than to a union accountable to its dues-paying members. Photo: NUHW.

The price of campaigning for union democracy can be high. Reformers can be fired, blacklisted, or beaten up. In some unions, rank-and-file critics of the leadership face internal discipline, which can result in fines, suspension, or expulsion.

When dissidents get dragged into court, it’s usually because officials sued them for libel or “copyright infringement” (involving the union logo), in efforts to inhibit free speech or shut down opposition websites.

But that was before “the NUHW 16.” Their four-year legal persecution has become a study in how a powerful union with deep pockets can make an object lesson of dissidents who dared disobey the dictates of higher authorities, and instead sided with the members.

Oakland lawyer Dan Siegel, who represents the NUHW 16, says during his four decades of handling Labor Management Reporting and Disclosure Act (LMRDA) cases he has “never seen a situation where an international union was using the federal law designed to protect union democracy to sue union dissidents”—until now.

Siegel fears that “more local union officials will be faced with a conflict of interest when their national union and their members tell them to do different things. If they stick with the workers, they could face a lawsuit for damages, measured by the entire budget of the local.”

NUHW is the National Union of Healthcare Workers, the California union created four years ago after the Service Employees (SEIU) removed elected leaders of its third-largest affiliate and trusteed the local, United Healthcare Workers (UHW).

UHW’s elected leadership had refused to cooperate with the international’s plan to force 65,000 long-term care workers into another local without the approval of the affected members. (That scheme was later abandoned after the trusteeship.)

Rather than continue their attempt to reform SEIU from the inside, rank-and-file leaders of UHW, along with its ousted officers and staff, formed a rival union, NUHW. Costly representation disputes between NUHW and SEIU have continued ever since.

One SEIU-UHW tactic has been to try to put its new competitor out of business. In 2009, SEIU filed a federal civil suit seeking $25 million in damages from 28 founders of NUHW.

The gist of SEIU’s case was that the connection between a national union and local affiliates is just like the Bank of America’s relationship to branch banks. If the parent company (in this case, SEIU), wants to reorganize a local branch or change its management in any way, there’s no legal basis for objecting.

Local officers, though elected by the members, owe a greater “fiduciary duty” to the international union than to anyone else. They must comply with any headquarters directive, even if the workers they represent are opposed.

Even though the case was tried before a white-collar jury and a federal judge sympathetic to this corporate conception of unionism, millions of dollars worth of inflated damage claims were withdrawn or thrown out, and 12 of the original defendants were found blameless.

But in April 2010, the trial court granted SEIU a $1,578,000 judgment against NUHW and 16 former UHW officers, board members, or staffers accused of diverting organizational resources to help create the new union just prior to the trusteeship.

The defendants personally tagged with half of this damage award range from young organizers in their early 30s to veteran labor activists in their 50s and 60s, some with families and mortgages.

UNITE HERE, the hotel workers union, posted a $900,000 bond to cover NUHW’s organizational share of the judgment while the verdict was appealed. Five defendants decided to pay SEIU, while others have seen their wages garnished.

SEIU tried to legally block two defendants’ attempts to declare personal bankruptcy, succeeding in one case. Some have posted cash bonds to postpone payment during the appeal, but still owe SEIU $40,000 to $85,000 each.

In March, the U.S. Court of Appeals for the Ninth Circuit upheld the overall judgment. The court found that the LMRDA does, indeed, create a fiduciary duty to the union as an organization—not merely to its rank-and-file members.

Just as at the trial court level, whether or not “SEIU was a model international union” was deemed irrelevant. The three-judge panel chided the defendants “for their decidedly anarchistic methods of opposition” (that is, “engaging in ‘dual unionism’ that is not protected speech” under the LMRDA).

NUHW and the individual defendants say they will appeal to the Supreme Court.

Three years ago, SEIU acknowledged having spent about $5 million on the four law firms involved in this suit, just through the trial stage. NUHW believes that SEIU has, by now, spent more than $10 million of its members’ dues money on the case.

Siegel explains, “SEIU is obviously operating on the assumption that they will spend $1,000 to make $50 or $30 or $20 in order to wipe out NUHW and punish anyone associated with it.”

“The outrage that I feel about them getting even a dime is beyond description,” says 68-year-old Phyllis Willett, former operations manager for the pre-trusteeship UHW, who owes SEIU $85,000.

Steve Early was a representative for the Communications Workers for 27 years and is author of The Civil Wars in U.S. Labor, about the SEIU-NUHW battles.

Donations to defray NUHW 16 legal expenses can be made at The Fund for Union Democracy and Reform or by sending a check made out to “FUDR” to NUHW, 5801 Christie Ave., Suite 525, Emeryville, CA 94608.

Steve Early was a longtime Boston-based national union representative for the Communications Workers of America. He has written four books about labor and politics, including Save Our Unions (Monthly Review), and just co-authored a new book dealing with veterans’ issues. He can be reached at Lsupport@aol.com.
Related
What Today's Union Reformers Can Learn from Miners for Democracy »
Viewpoint: What Message Does a ‘Vote No’ Campaign Send? »
Challengers Win Big in UAW Elections; Presidency Headed to Run-Off »
Southern Service Workers Launch a New Union »
UFCW Reformers Look to 2023 »