San Francisco Students Sit In to Save Beloved Community College 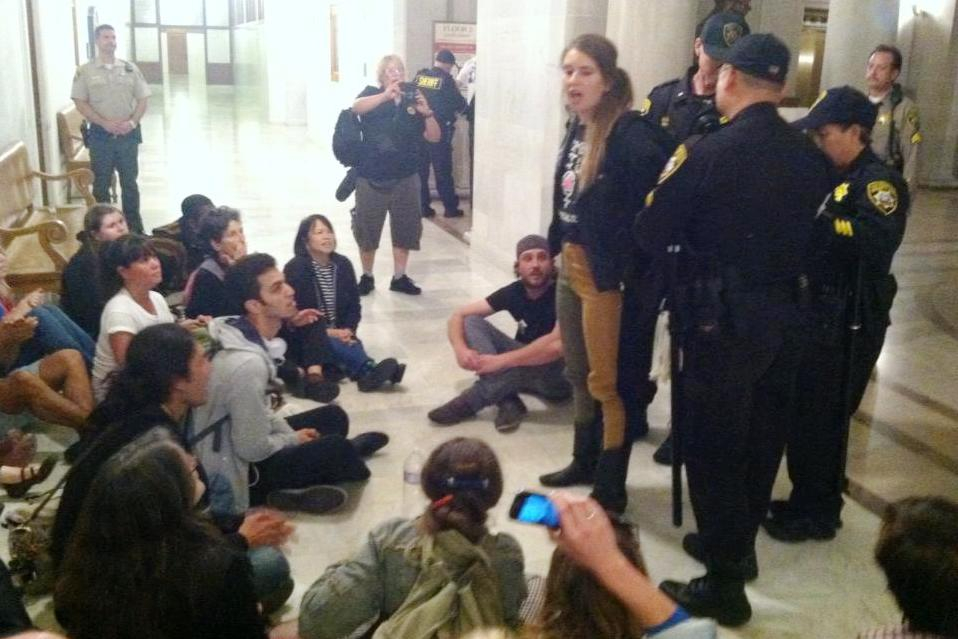 City College of San Francisco student Windsong was one of 26 arrested in a City Hall sit-in late last night. An accrediting commission is threatening to shut CCSF down, not for any problem with quality but because it treats its employees too well and gives away too much free community service. Photo: Save CCSF.

The much-loved, low-tuition community college may shut down in July 2014. It’s the target of an unusually frank attack from an unexpected source, the Accrediting Commission for Community and Junior Colleges.

ACCJC doesn’t claim any problems with quality of instruction. Rather, CCSF apparently treats its employees too well and gives away too much free community service.

If stripped of accreditation, the college and its 110,000 students would lose access to local, state, and federal funding.

A “czar” assigned by the state community colleges chancellor has been given “extraordinary powers” and has dismissed the elected board of trustees.

But San Francisco was probably the wrong place for a direct attack on a community college. An estimated 54 percent of San Francisco voters or their family members have attended CCSF. A robust community coalition, including college workers and students, is fighting to save it.

The ACCJC has no complaints about the value of City College’s degrees and credentials.

Instead, what it considers problematic is CCSF’s broadly democratic culture of shared governance, very strong faculty union (Teachers Local 2121), good contracts that provide decent work for employees, prioritization of instruction over administration and paperwork, and service to the community in the form of non-credit, no-cost programs.

The ACCJC’s first ultimatum, issued in July 2012, told CCSF to streamline its governance, replace faculty with administrators, pre-fund retirement liabilities, and make faculty write up Student Learning Outcomes for every course. (Most faculty regard SLOs as phony busy-work.)

Student and community activists formed the Save CCSF coalition, with significant faculty participation. The union joined the official working groups set up to achieve compliance. But when ACCJC’s July 3, 2013, termination letter arrived, it became clear that all that good-faith effort was not going to make a difference.

Shanell Williams, the elected student member of the now-dismissed board of trustees, says, “The last year has been like living under an occupation.”

Some hoped money would save CCSF. The coalition organized to persuade city voters to pass Proposition A, a special parcel tax dedicated to funding the college. This was in addition to the statewide Prop 30, a “tax the rich” initiative to fund education. Both passed in November 2012.

But the trustees chose to place the money in reserves rather than use it to restore programs.

In April the California Federation of Teachers (CFT), the state-level organization of the faculty union, submitted a 300-page complaint about the ACCJC to the federal Department of Education. The complaint charged ACCJC with abandoning its mission of judging quality of education, operating in secret, having conflicts of interest, and violating due process.

The Department responded on August 13, agreeing that ACCJC had violated due process and implying that the Commission could be sanctioned itself.

This good response from the Department of Education shows the fight is having an effect. But the overall agenda of shrinkage and privatization has not changed.

The big question is, why would anyone come after City College? Community colleges are low-cost, open-access ladders of opportunity for working class students of all ages who hope to transfer into four-year colleges, learn trade skills, or explore lifelong learning.

The 114 California community colleges, with free non-credit programs and a per-credit tuition cost of $46 (compared to $89 at Chicago city colleges, for example), are among the best in the U.S.

They are the door to a system of public higher education that was designed to be free under the state’s 1970 Master Plan. Free tuition at all levels of the state system was sustained into the 1980s, when fees began to creep up.

Unionized CCSF is one of the stars of the system, as well as the largest. Its part-time faculty, the majority, work under a contract that is the best in the U.S. for community college adjuncts, with some job security, benefits, and wages high enough to live decently.

In the current wave of attempts to privatize everything public, with for-profit institutions hungry to take advantage of the student loan and Pell Grant revenue stream, it’s not surprising that a huge, low-cost college like CCSF would become the target of neoliberal “education reformers.”

There is also evidence that CCSF was targeted by conservative state legislators to punish it for very active student/faculty demonstrations in March 2012, against a state-level proposal to downsize community colleges.

But why? Who benefits? Use the principle of “follow the money.” The potential windfall is enormous for private for-profit institutions like the Culinary Institute, the Art Institute, or Heald College, to say nothing of Phoenix or Capella or the other thriving online colleges, which will pick up students displaced if CCSF closes.

This is especially true in a period of high unemployment where people are competing for jobs on the basis of credentials and diplomas.

Proponents of for-profit education aim to privatize whatever can turn a profit. That doesn't include the public sector colleges accessible to working class students. So the privatizers would have them teach only in the service of employer-defined vocational goals, or act as gatekeepers to winnow out a selected few students for transfer to the university system.

Who pays for implementing this agenda?

The ACCJC is just one of many potential tools that can be used to crack open the billions of dollars embedded in public education. Most of the regional accrediting commissions have not taken up this mission.

In fact, the CFT calls the ACCJC “rogue.” It has issued 64 percent of all the sanctions on community colleges issued nationwide by any accrediting commission.

These commissions are not public agencies. They are authorized but not created by the Department of Education, and they are funded by membership dues (the colleges are members) and foundations.

It is through foundation funding that the neoliberal education “reformers” like Bill Gates and Eli Broad, who are leading the charge to charterize K-12 education, become involved. The Lumina Foundation, along with the Kresge Foundation, the Helios Education Foundation, USA Funds, and the Gates Foundation are specifically targeting community colleges to reshape their role in both career education and transfer programs.

The attempt to close CCSF is an extreme sample of what is coming to higher ed nationally.

Helena Worthen teaches at the National Labor College. Joe Berry is a retired CCSF labor studies and history teacher and former officer in AFT 2121, currently involved in the fight to save the college.