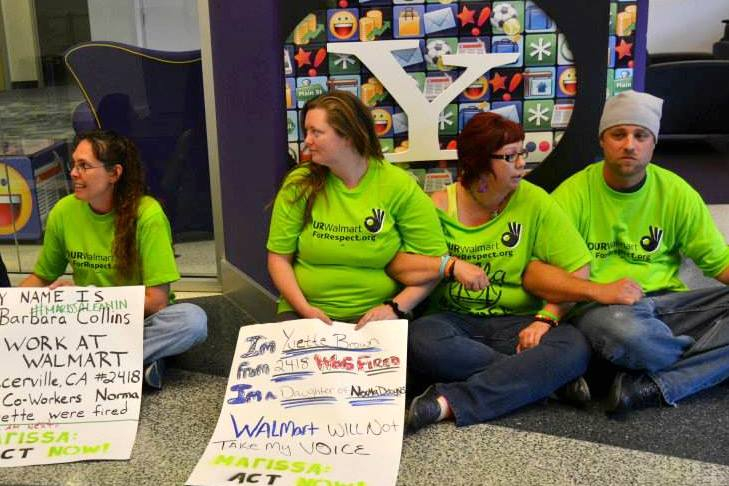 OUR Walmart members and others sat in outside Yahoo's annual shareholder meeting on June 24. The workers are targeting Yahoo CEO Marissa Mayer, who is also a Walmart board member, demanding and end to illegal firings. Photo: OUR Walmart.

In a coordinated purge, Walmart has lashed out against retail workers who walked out in early June.

More than 60 have been fired or disciplined so far, said Brandon Garrett, a worker from Baker, Louisiana, who was fired June 28. About two dozen have been terminated.

The retaliation is in response to the week-long strike by hundreds of employees from dozens of stores around the country. Many took buses to Walmart’s annual shareholder meeting in Bentonville, Arkansas, stopping in 30 cities along the way to gather additional strikers and hold rallies.

The strike and “Ride for Respect” to Bentonville was the most ambitious action yet for the Organization United for Respect at Walmart, a group formed in 2011 with the support of the United Food and Commercial Workers (UFCW). Its goals are $13 an hour, adequate hours, respect on the job, affordable health care, and a way to redress grievances.

More than a dozen OUR Walmart members had been fired, even before the June strikes, for their earlier organizing, including a series of one-day walkouts. But members had long been bracing for heavier retaliation as their influence spread. They asked community supporters to join “rapid response” teams in case firings escalated.

Workers said they thought Walmart headquarters was coordinating the discharges, which didn’t happen when workers first returned from Bentonville. Garrett and a co-worker were fired three weeks later for failing to show up on the strike days.

Garrett, who worked as an overnight stocker, explained to his supervisor that he had struck to protest unfair labor practices—and that firing him for that was illegal. “We don’t recognize strikers,” his supervisor said.

Some strikers who are popular OUR Walmart leaders in their stores did not get fired, however, which indicates that management is hesitant to employ a scorched-earth policy, perhaps fearing the reaction among workers who are on the fence.

NO SHOW, NO CALL

Fired workers said managers accused them of not calling in to report their absences. (Labor law does not require it.)

But OUR Walmart, anticipating management’s claims, had faxed lists of the workers planning to strike to managers in each store. In addition, workers phoned the call-in-sick number and got confirmation numbers, said Yvette Brown, fired in Placerville, California. Supervisors claimed they never got the faxes or the calls.

Brown’s mother, Norma Dobyns, said she was fired from the same store for the same bogus reason.

Another striker, Marc Bowers, was fired with two co-workers two weeks after Bentonville after eight years at a Dallas store.

“I got tired of being scared,” Bowers said. “And the more I spoke up, the more they had me in the office.”

The firings are almost certainly illegal retaliation under the National Labor Relations Act, and all fired workers will file complaints—but justice from the Board is notoriously slow, and penalties for employers are weak.

On August 22 OUR Walmart marched to the offices of the Labor Board in Washington. Members plan a nationwide protest September 5 on behalf of the fired workers, but details have not yet been released.

And the group is again gearing up for Black Friday, the day after Thanksgiving and the biggest shopping day of the year. Last year, community supporters were asked to take action inside and outside stores. Organizers won’t say whether workers will strike on Black Friday as they did last year.

UFCW is doubling down despite the company’s reaction. Convention delegates voted to raise dues in August to pay for new organizing, which includes the Walmart effort.

The grocery workers who make up the bulk of UFCW’s membership have been battered; their employers threaten they’ll go out of business if they can’t compete with Walmart’s low labor costs.

Walmart sells more groceries in the U.S. than any other retailer.

UFCW also rejoined the AFL-CIO, after having left to join the rival Change to Win federation with the Service Employees in 2005. Both the dues increase and rejoining the larger federation bode well for resources for the Walmart effort, staffers said.

To keep the firings in the public eye, OUR Walmart has been targeting key company board members, asking them to intervene against the retaliation. Five workers were arrested June 24 outside Yahoo’s shareholder meeting in Sunnyvale, California, where CEO Marissa Mayer is also a Walmart board member.

The Brown-Dobyns mother-daughter duo traveled to New York in late July to protest outside the house of Walmart director Christopher Williams, who lives in a tony building on Manhattan’s Upper East Side. They asked passersby to sign a letter to Williams, as the building beefed up security.

Members have held protests at stores, too. In Federal Way, Washington, they filled out a giant “coaching” slip, the kind used by managers to discipline employees, and presented it to managers for firing member Gerardo Paladan.

Paladan had already been disciplined for complaining about a broken pallet jack he said was unsafe. He took his complaint to the labor board, and Walmart settled, with the store posting a sign saying it would not retaliate against workers. But in July it suspended Paladan again.

In central Florida, OUR Walmart and Orlando Jobs with Justice have been picketing various area stores every Wednesday to protest firings, and plan a “camp-out” in front of a store.

Board chair Rob Walton, the 17th richest person in the world, was picketed when he raced four fancy cars at an event near Salinas, California. “The American people are tired of paying for your expensive hobbies,” said a leaflet handed out by protesters, including two fired strikers. “Time to pay your workers a living wage.”

Feeling the criticism, the company recently rolled out an advertising campaign touting its “career opportunities.”

Perhaps to hinder organizing, Walmart has accelerated hiring through staffing agencies. Ten percent of the workforce is now temporary, up from 2 percent last year. Until recently, the company used temps only during holiday rush. In a June survey of 52 stores by Reuters, 27 were hiring only temps.

Walmart’s warehouses are notoriously hard to organize because they involve several layers of contractors and staffing agencies. The company may now be applying this anti-union insulating technique to its stores as well.

For information on upcoming support actions, go to bit.ly/theWalmart60. An earlier version of this article appeared here.

A version of this article appeared in Labor Notes #414. Don't miss an issue, subscribe today.