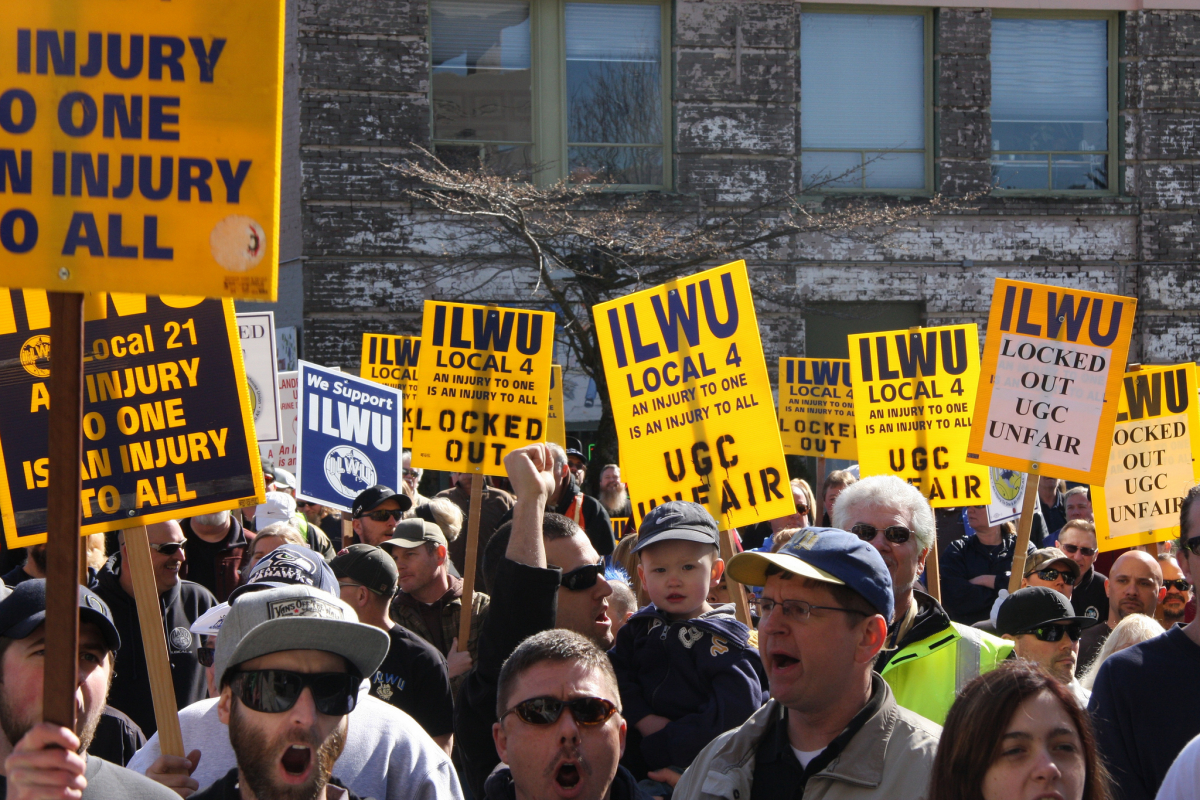 Longshore workers from across the Pacific Northwest have come to the aid of locked out grain handlers in ILWU Local 4 and Local 8. Source: ILWU.

In a surprise move, the 60,000-member* International Longshore and Warehouse Union announced its disaffiliation from the AFL-CIO yesterday. The news comes just a week before the federation is set to hold its national convention in Los Angeles, the nation’s biggest port and an ILWU stronghold.

The ILWU, known for its militant traditions and progressive politics, has been drawn into turf wars with other unions in recent years—particularly in the grain export terminals of the Pacific Northwest, where longshore workers have been locked in a high-stakes battle over master contract standards since 2011.

In an August 29 letter to AFL-CIO President Richard Trumka, ILWU President Robert McEllrath cited these ongoing jurisdictional battles as part of the union’s decision to disaffiliate. The skirmishes hit close to home: McEllrath comes out of Vancouver, Washington’s Local 4, where members of rival unions are crossing ILWU picket lines, and debate over the disputes was squelched at this summer’s state labor convention.

The letter also cited the federation’s compromised positions on health care and immigration reform. Invoking the union’s radical and independent history, McEllrath noted the ILWU did not join the AFL-CIO until 1988—after being kicked out of the CIO during the McCarthy era for being “too red.”

“[The AFL-CIO] wants to organize these big conventions, and rally to pat themselves on the back, doing nothing to promote the working-class,” said ILWU Coast Committeeman, Leal Sundet, who supported the union’s decision to disaffiliate.

The ILWU supports a national single-payer health care system, while the AFL-CIO is “in lockstep with Obama,” Sundet said. He criticized the federation for being unwilling to discuss the shortcomings of the Affordable Care Act, which discriminates against union Taft-Hartley benefit plans and will impose a so-called “Cadillac tax” on generous benefit plans.

Sundet also chided the federation’s position on immigration reform. The AFL-CIO is backing a bill that he contends will only make things harder for working-class immigrants, because it is “designed to give [only] highly-paid workers a real path to citizenship.”

It’s clear, however, that the overriding factor in the break is fallout from the ILWU’s ongoing struggle to maintain its longstanding contract standards—and jurisdiction—for 3,000 longshore workers who handle grain along the Puget Sound and Columbia River. Sundet is in the middle of the storm, heading up grain negotiations for the union.

Longshore workers in the region move nearly 30 percent of all U.S. grain exports, including half the nation’s wheat shipments.

After talks broke down in December between the ILWU and the Pacific Northwest Grain Handlers Association, two of the four employers—United Grain and Columbia Grain—imposed their “last, best, and final offer,” in hopes of provoking a strike. Meanwhile the union hammered out a separate deal with TEMCO, a joint venture between global agribusiness companies CHS and Cargill.

In February, United Grain locked out ILWU Local 4 members in Vancouver, Washington. In May, Columbia Grain did likewise with ILWU Local 8 members in Portland, Oregon.

In both cases ILWU members have been rankled by Electrical Workers (IBEW) and other union members crossing their picket lines, escorted in by the company’s private security forces. Adding insult to injury, the IBEW has initiated internal AFL-CIO procedures to contest ILWU jurisdiction over maintenance and repair work in multiple ports in the region.

The lockouts follow on the heels of a pitched battle over 25 jobs in Longview, Washington, in 2011. ILWU members squared off with grain giant EGT after the company announced it would operate its new state-of-the-art terminal with the more compliant Operating Engineers (IUOE) union. After months of picketing and direct action—including occupation of the grain terminal, a blockaded train shipment, and scores of arrests—the ILWU finally reached an agreement.

Despite the militancy, the EGT contract loosened work rules and staffing standards compared to the master grain contract.

The solo agreement with TEMCO mirrored some of these concessions. But the employer holdouts are banking that they can spread more of the concessions EGT got, such as regular 12-hour shifts, bypassing seniority, and greater flexibility to use supervisors for bargaining unit work.

ILWU members see the turf battles with rival unions as an additional, unwelcome hurdle to surmount, in an already difficult employer battle.

Attempts to bridge the divisions using the machinery of the AFL-CIO have sputtered, according to Cager Clabaugh, president of ILWU Local 4. One particularly galling example for Clabaugh, a former state fed vice president, was a move to scuttle discussion of the conflicts at the Washington state AFL-CIO convention in July.

“We’re at the state labor convention for three days, a half-mile from the picket line of my membership where we’ve been locked out for five months, and nobody’s even brought up our lockout, not once,” Clabaugh said. “Our resolution gets shot down, not even considered. We can’t even talk about labor inside the house of labor, and that’s wrong.

“It made me sick watching these big unions play politics instead of figure out a way to support solidarity.” Clabaugh said. “If only as much focus and effort was put on trying to figure out a way to let their members do the right thing, or even educate members on why we don’t cross picket lines, why it’s important.”

For Clabaugh, the state AFL-CIO’s focus on decorum rather than the needs of its members helps explain why many ILWU members are frustrated enough to support disaffiliation.

On the national stage, the ILWU pullout casts a shadow over the AFL-CIO’s efforts to reassemble the House of Labor.

In 2005, seven unions—spearheaded by SEIU and the newly-merged UNITE HERE—formed a rival federation, Change to Win. The new alliance pledged to spend 75 percent of its resources organizing the unorganized.

But the fanfare was short-lived. A bitter internal struggle gripped SEIU in 2008, leading to a trusteeship of its third-largest local, and the union subsequently went to war with its long-time ally UNITE HERE.

And this summer the 1.3 million-member Food and Commercial Workers (UFCW) followed suit.

The disaffiliation highlights tensions, simmering just below the AFL-CIO’s surface, over the federation’s relationship to the Obama administration despite its spotty workers’ rights record. The news creates at least the opening for a discussion of these tensions at next week’s convention.

But whether or not the ILWU’s exit gooses convention delegates to cross-examine, rather than cheerlead, current strategies for labor’s revival, it should spark a healthy dose of self-reflection. The ILWU can’t remain an anchor of the waterfront workforce, or preserve today’s longshore standards, simply leaning on its rich history and legacy of militance.

It too, needs a survival strategy if longshore workers want to avoid the fate of once-strong unions like the UAW. Automakers worked for years to shrink the Big 3’s core workforce through outsourcing and automation, drive down standards across the rest of the industry, and create a “union-free” supply chain. The UAW accepted the faustian bargain of partnership, and arithmetic did the rest. Now a union that once boasted a million and-a-half members and set standards for workers everywhere has been reduced to 380,000 members, where a growing share of those are working for half the UAW’s traditional wage scale.

ILWU members may sit atop the most powerful chokepoint in today’s economy, but employers are working overtime to break their hold on the docks. And public opinion too often casts well-paid longshore workers as part of an unsustainable past, rather than a key link to a prosperous future.

The AFL-CIO breakup may satisfy ILWU rank-and-filers starved of solidarity, and it offers the union a chance to stand for principles over bureaucratic decorum. But leaving the federation is no substitute for spelling out a strategy to beat back emboldened employers, keep automation from sapping union power, or stop concessions from spreading. The ILWU’s members, with their rich history, deserve no less from their union.

Here's hoping this shakeup stirs the ranks to once again, put their union's slogan—an injury to one is an injury to all—into action.

Mark Brenner is the former director of Labor Notes and is currently an instructor at the University of Oregon's Labor Education & Research Center.
Related
Viewpoint: It’s Time to Tap into Labor’s Fortress of Finance »
How Intermodal Yard Workers Doubled Their Pay »
Viewpoint: Two Contrasting Visions of the Labor Movement Were on Display in June »
We Can't Just Keep Saying 'Pass the PRO Act.' We Have to Organize. »
It's Awfully Convenient for Shippers that Longshore Workers Get Blamed for Delays, As Contract Fight Looms »