How Black Unionists Organized the 1963 March for Jobs and Freedom 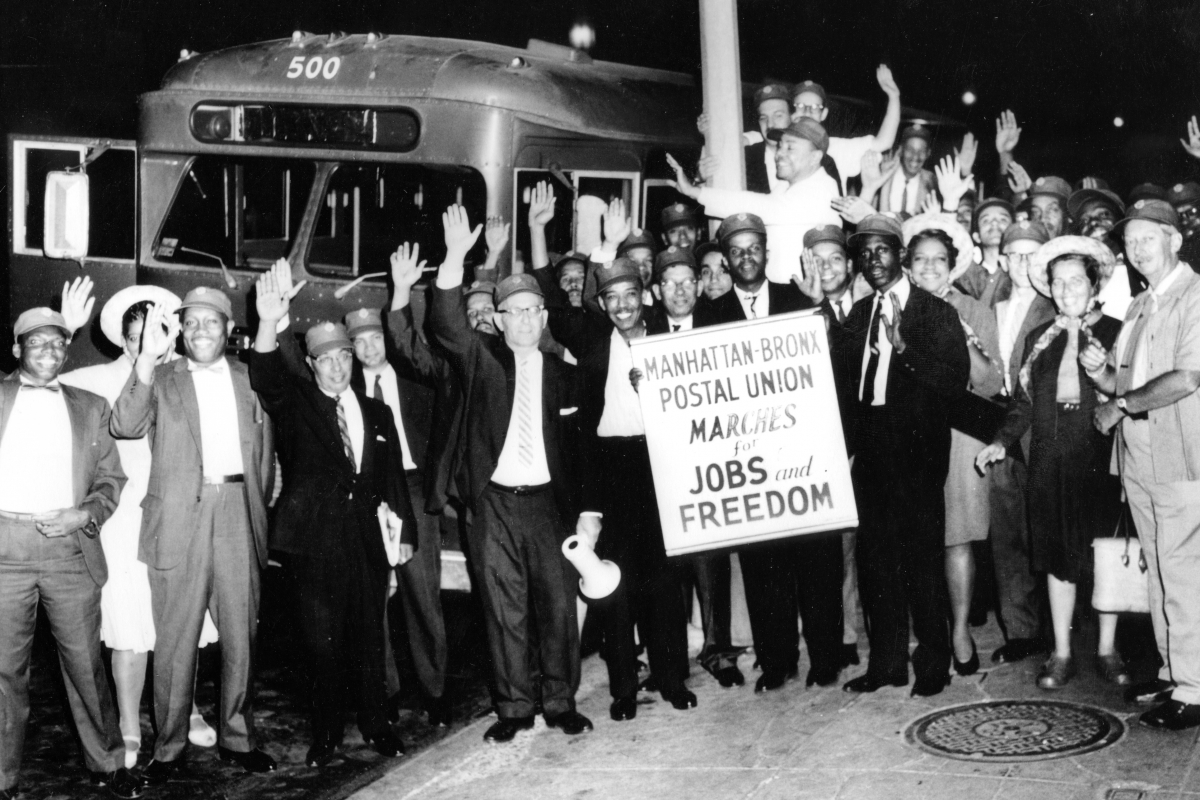 New York postal workers get on the bus for Washington. The 1963 march was planned to draw attention to “the economic subordination of the Negro,” create “more jobs for all Americans,” and advance a “broad and fundamental program for economic justice." Photo courtesy of the New York Metro Area Postal Union Photographs Collection, Tamiment Library and Robert F. Wagner Labor Archives, New York University.

This summer marks 50 years since 1963’s March on Washington for Jobs and Freedom drew more than 200,000 people. But after the latest one-two punch—George Zimmerman walking free after killing Trayvon Martin, and the Supreme Court rolling back the Voting Rights Act—a new March on Washington August 24 was clearly needed to renew the struggle. (Get on board here.)

A fascinating new book from historian William P. Jones puts the 1963 action in its organizing context. Every U.S. school child learns the opening words of Dr. King’s “I Have a Dream” speech, but how many are taught that the march was the brainchild of the nation’s leading black labor activists—and called not only for an end to prejudice, but also for a federal jobs program, equality at work, and a boost to the minimum wage?

Black unionists organized through the 1950s against discrimination in hiring, on the job, and in unions. After a 1959 convention vote reaffirmed that the AFL-CIO would tolerate segregated locals, A. Philip Randolph (the “dean” of black unionists and leader of the Brotherhood of Sleeping Car Porters) and others founded the Negro American Labor Council to organize black workers.

Randolph predicted, if racist trends persisted in unions and apprenticeships, a “forgotten slum proletariat in the black ghettoes of the great metropolitan centers of the country, existing within the grey shadows of a hopeless hope.”

At the NALC’s 1960 founding convention, women unionists protested an all-male board and won two seats. Local chapters sprang up across the country, and the group kept pressing the AFL-CIO to tackle both civil rights and black workers’ access to better jobs.

Over time, they brought about remarkable change. This year AFL-CIO unions blanketed the National Mall to celebrate and recommit to the struggle for racial justice.—Eds.

In January 1963 A. Philip Randolph asked his old friend Bayard Rustin, who was working for the left-wing War Resisters League, to prepare a proposal that could win support from civil rights and labor leaders for a “mass descent” on the nation’s capital….

Rustin delivered a three-page memorandum outlining an ambitious campaign to draw attention to “the economic subordination of the Negro,” create “more jobs for all Americans,” and advance a “broad and fundamental program for economic justice.”

Their plan centered on a massive lobbying campaign, in which 100,000 people would shut down Congress for one day while presenting legislators and the president with their legislative demands, followed the next day by a “mass protest rally.”

Randolph liked the idea, and the NALC vice presidents approved it on March 23. By then the plan had expanded to include a mass march from the Capitol to the Lincoln Memorial, where they hoped that President Kennedy would address the crowd….

Although southern activists [such as Martin Luther King, Jr.’s SCLC and the student group SNCC] had been focused on campaigns in Alabama and Mississippi, their attention shifted to Washington after the Kennedy administration refused to intervene against flagrant violations of federal authority in the South….

“In his broadest attack to date on President Kennedy’s civil rights record,” the New York Times reported, King warned that the SCLC and other groups were prepared to organize “a march on Washington, even sit-ins in Congress” to force the federal government into action.

Recognizing an opportunity to coordinate with the southern movement, Anna Arnold Hedgeman set up a meeting where Randolph and King resolved to march under the slogan “For Jobs and Freedom.” They soon won support from John Lewis, who had been elected chairman of SNCC, as well as James Farmer of CORE [Congress of Racial Equality]….

Recognizing that the March on Washington would take place even without their participation, and assured that the demonstration would be as peaceful and orderly as the June 23, 1963 Detroit Walk to Freedom, Roy Wilkins of the NAACP and Whitney Young of the Urban League finally came on board.

With leaders of the NALC, SCLC, CORE, and SNCC, they met in New York on July 2 and pledged to mobilize local chapters of their respective organizations to bring their membership to Washington on August 28, the eighth anniversary of Emmett Till’s murder.

Bayard Rustin presented a detailed set of demands for the demonstration, including a federal jobs creation program, raising the minimum wage, a Fair Employment Practice law, and support for Kennedy’s civil rights bill. He anticipated that they could get 100,000 people to participate and estimated that the event would cost $65,000….

Historians have marveled at Rustin’s ability to build the march “out of nothing” in less than two months, but that assessment overlooks the rich organizational networks that he built upon.

Cleveland Robinson and L. Joseph Overton [both of District 65 of the Retail, Wholesale, and Department Store Union] asked trade unionists to establish local organizing committees in cities where they had influence, and CORE’s Norman Hill spent July and August travelling across the country to coordinate their efforts.

Roy Wilkins wrote to every NAACP branch, youth council, and state conference asking them to organize “no less than 100,000” people to participate in the March, and he dispatched NAACP labor secretary Herbert Hill to help them do that.

Anna Hedgeman was charged with reaching out to religious groups. She took particular pride in recruiting white Christians from the South who “feel concern but have all too little opportunity to express it in their home place,” stating that the March would give them a chance to meet “white allies” from other regions while also demonstrating that African Americans were not completely alone in the South.

She also convinced the National Council of Churches to hold its annual convention in Washington the week of August 28 and encourage its 80,000 members to attend the March….

The American Jewish Congress and the National Catholic Conference for Interracial Justice endorsed the March on Washington, along with 17 international unions, several state and municipal labor councils, and the Industrial Union Department of the AFL-CIO.

By the end of July, Rustin reported that local organizing committees had chartered 2,000 buses, 21 trains, and 10 airplanes—enough to carry 115,000 marchers to Washington.

AFL-CIO SITS IT OUT

The one major liberal body that rebuffed Randolph’s request for support was George Meany’s AFL-CIO, but by that point the March was clearly prepared to move forward without it.

Randolph and UAW President Walter Reuther pushed for the endorsement at a meeting of the executive council just two weeks before the March, but met resistance from union leaders who feared “that there would be disorder, that people would get hurt, and that it would build up resentment in Congress.”

Some pushed for outright rejection of the March, but President George Meany negotiated a compromise that expressed support for its goals and allowed affiliated unions to participate but withheld an official endorsement from the federation itself.

A version of this article appeared in Labor Notes #414, September 2013. Don't miss an issue, subscribe today.
Related
Collectively Fabulous »
A Life in Transit: ‘What You Can Get Is Set by How Far You Are Prepared to Go’ »
When Workers Swapped Segregation for Solidarity »
Chicago Passes Union-Backed Bill for Civilian Oversight of Violent Cops »
Viewpoint: Solidarity for the Tenet Nurses Strike Should Be Labor's Top Priority Right Now »