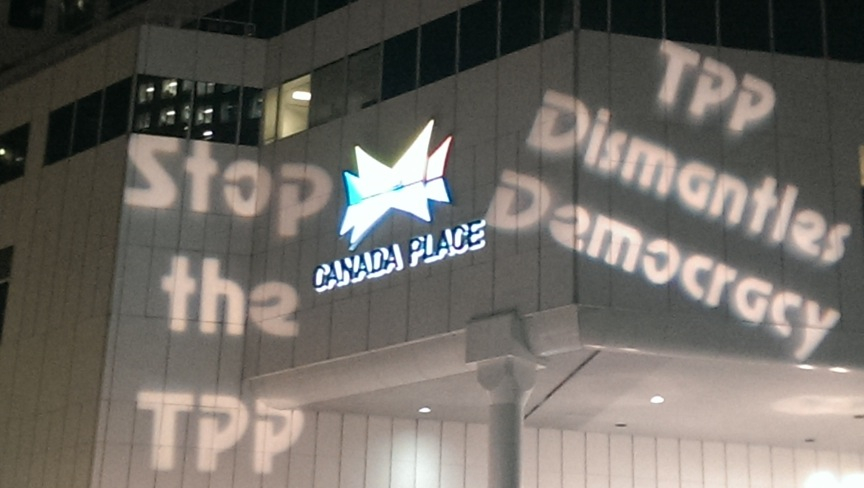 TPP talks held in British Columbia in June were kept secret, but Canadian activists learned about them the day before from an article in the Peruvian media. Opponents hustled to hold an emergency teach-in and to project messages about the TPP on downtown Vancouver buildings. More talks will take place July 15-25 in Malaysia. Photo: Citizens Trade Campaign.

Many people know NAFTA has cost U.S. workers 700,000 jobs. But how many know another effect was to drive Mexican small farmers out of business?

In the brave new world of free trade, Costco makes tortilla chips and salsa in the U.S. and trucks them to its stores in Mexico.

Congress will soon debate whether to “fast-track” a trade deal that would make job-killers like NAFTA look puny. The Trans-Pacific Partnership would give corporations the right to sue national governments if they passed any law, regulation, or court ruling interfering with a corporation’s “expected future profits.”

They could also sue over local or state laws they didn’t like. The TPP would cover 40 percent of the world’s economy.

Existing laws and regulations on food safety, environmental protection, drug prices, local contracting, and internet freedom would all be up for challenge. And the decision-makers on such suits would not be local judges and juries; they’d be affiliated with the World Bank, an institution dedicated to corporate interests.

CAN IT BE STOPPED?

Citizen groups believe they can stop the TPP if there is enough outcry. They point to previous victories over the WTO (World Trade Organization) and FTAA (Free Trade Area of the Americas).

What Is the TPP?

It might as well stand for “Take Power from the People,” a Detroit postal worker said.

A “docking mechanism” would allow other countries, including China, to join over time.

The contents have not been made public, but are known to the 600 “corporate advisors” helping write it, such as Chevron, Halliburton, Walmart, Ford, GE, AT&T, Cargill, Pfizer, and the Semiconductor Industry Association. Some information has come to light through leaks.

Like most trade agreements, the TPP is mostly not about trade but about giving corporations more rights to interfere with local laws.

TPP tribunals staffed by corporate lawyers, outside the control of any government, would rule whether a country’s taxpayers must pay monetary damages to wronged corporations.

Negotiations begin in July on a Trans-Atlantic Free Trade Agreement between the U.S. and the European Union. Stopping TPP would help derail it, too.

Most unions, however, have been slow to get on board—even though the TPP would jeopardize, according to the AFL-CIO, millions of jobs. The Teamsters and Communications Workers have been the most active.

Greg Junemann, president of the Professional and Technical Engineers, says unions have given up, certain that “what Obama wants to do, they [Congress] are going to do.” Junemann, with other union heads, sits on a labor advisory committee (LAC) on trade—which, he said, has been completely ignored.

In a June 6 letter, LAC chair Thomas Buffenbarger of the Machinists sharply criticized the administration for “restrictions on information that is shared with LAC members,” “unwillingness to share bracketed text or tabled positions from our negotiating partners,” and “refusal to include labor representatives on Industry Trade Advisory Committees.”

Over the opposition of many unions, President Obama signed corporate-friendly trade agreements with South Korea, Panama, and Colombia in fall 2011.

He singled out the TPP as a priority in this year’s State of the Union speech and wants Congress to give him “fast-track” authority.

Veterans of the fight against Bill Clinton’s NAFTA will remember fast track—Congress gives away its ability to amend an international agreement, in favor of a simple up-or-down vote. Each house may debate the bill for no more than 20 hours.

Fast track is likely to come up in late summer or early fall. But most Democrats in the House are opposed to fast track and the TPP, says Arthur Stamoulis of the Citizens Trade Campaign, and many Republicans will also vote against it (some because they want to deny Obama any appearance of success).

Junemann counters that, in the end, doing what big business wants will weigh more with Republicans than hurting Obama.

In any case, “there is no way they can get TPP through without fast track,” Stamoulis said. “When we defeated the FTAA [in the early 2000s], the first step was cross-border people’s movements dragging the proposal out of the shadows, shining a light on it, and introducing accountability and scrutiny to the negotiations.”

Light and scrutiny have both been sorely lacking thus far, but leaks about TPP’s contents are alarming.

Corporations could sue governments over laws not to their liking. They are already doing so under existing “trade” agreements, but TPP would vastly expand the number of corporations and countries involved.

After the Fukushima disaster, Germany enacted a moratorium on nuclear power; a Swedish energy company is now suing the German government. Bechtel sued Bolivia for undoing the privatization of its water supply.

Corporations have already collected $365 million by suing governments, usually in developing countries, under existing treaties, and $13 billion more is pending in suits under NAFTA and the Central America (CAFTA) and Peru FTAs.

Most suits thus far are over environmental issues. But in June 2012, the French firm Veolia sued the Egyptian government for raising the minimum wage.

So if the government doesn’t want more suits, it has to change its laws (or pressure the local government to do so). Under NAFTA, the U.S. chemical company Ethyl Corp. sued Canada because it had banned the use of a gasoline additive called MMT, as a public health measure. Canada backed down, allowed MMT, and paid Ethyl $13 million.

And presumably, when U.S. states, counties, and cities ban fracking, energy companies from any interested country could try to get those bans overturned. (Domestic oil and gas companies are already suing over local fracking bans, such as in Longmont, Colorado, and Dryden, New York.)

These new rights for corporations are horrifying, but the most widespread effect of TPP would be job loss. The minimum wage in Vietnam, for example, is $2.23 a day, so labor-intensive industries are already eager to move there. The TPP would accelerate that process:

Through arm-twisting and over the objections of the unions who’d worked to get him elected, Bill Clinton pushed through NAFTA in 1993. But by the early 2000s, “free trade” had a track record.

The Free Trade Area of the Americas would have extended NAFTA to 31 more countries in the hemisphere. Some Latin American countries, notably Brazil, said no. Big protests were held in Quebec City in 2001 and in Miami in 2003, and the FTAA died.

To stop fast track and the TPP, Citizens Trade Campaign suggests three actions: Contact your Congressperson and urge a “no” vote. Spread the word widely about the TPP, through all channels. And if TPP negotiations are held in North America, mobilize to greet the bargainers—à la Seattle 1999.