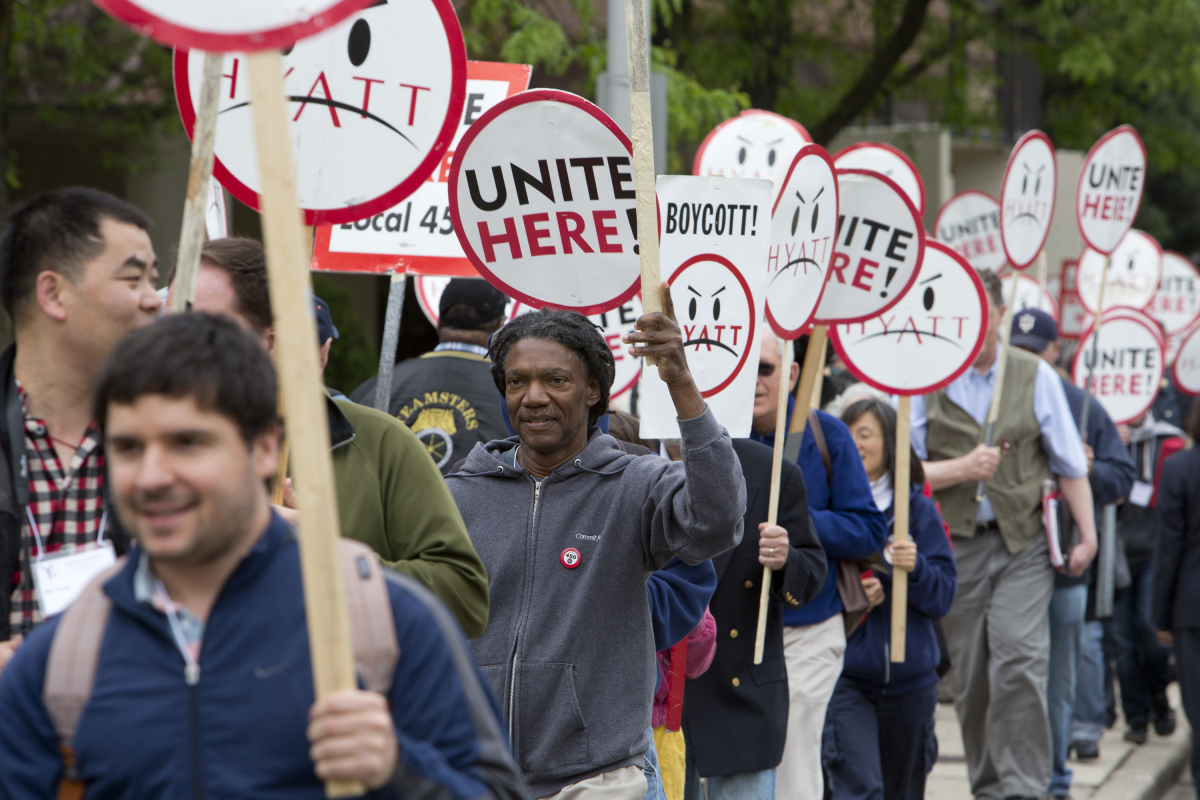 Hyatt hotel workers conducted a multi-year boycott of their employer, seeking a contract that would allow them to organize additional hotels. Labor Notes conference attendees marched to the Hyatt Regency O'Hare in May last year as part of the campaign. Photo: Jim West/jimwestphoto.com.

After an exasperating four-year campaign against the Hyatt hotel empire, the hotel workers union announced an agreement yesterday. In addition to long-awaited raises, the Chicago-based chain agreed to what UNITE HERE calls “a fair process” for recognizing unions at several Hyatt-owned and -operated hotels.

Union members in San Francisco, Los Angeles, Honolulu, and Chicago will vote on the proposed contract in the coming weeks. If they vote yes, UNITE HERE’s international boycott of Hyatt will end.

The union held out for a contract that will allow organizers to recruit members at new hotels. At non-union properties, wages are ratcheting down as work requirements creep up and regular employees are replaced with temps. Housekeepers in cities where the union is hoping to organize—such as San Antonio, Indianapolis, and Baltimore—are required to clean as many as 30 rooms a day, a pace that causes disabling injuries.

Hotel managers tell workers, “‘Across town they’re cleaning 30 rooms a day. Why can’t you?’” said a Los Angeles hotel housekeeper last year, explaining how standards are getting harsher across the industry.

Union staff said the “fair process” in the contract would look something like that used at two Hyatts in Long Beach, California, where workers voted to become members of UNITE HERE in April.

There, managers dropped opposition to unionization and allowed the union to present its case to workers at the hotel. “After a couple days of that, we brought in ballot boxes and they voted,” Stephen D’Agostino, a Hyatt general manager, told the Long Beach Business Journal.

The election was overseen by a federal arbitrator rather than the National Labor Relations Board.

Hyatt’s sudden friendliness to the union in Long Beach is no mystery. After UNITE HERE’s 10-year campaign for union recognition, Long Beach voters passed a measure in November that drastically reduced management’s incentive to block the union. Long Beach hotels with more than 100 beds now have to pay their workers $13 an hour, $5 above California’s minimum wage, as well as giving 2 percent annual raises and five paid sick days a year. Hotels with collective bargaining agreements are exempt from the law.

However, many hotels the union hopes to organize will not be fully included in the “fair process” agreement. These are hotels which are either not owned by Hyatt or they are owned by Hyatt but managed by another company. It is not clear how many hotels the contract places in each category, and union spokespeople would only say “a number of hotels.”

On the plus side, according to sources in the union, the contract reserves for workers at union hotels the right to strike, after a year, if their sisters and brothers at the organizing properties are not treated right. Union contracts typically ban strikes for the length of the contract. The Hyatt contract would expire in 2018.

Agreements by management not to fight the union, often called “neutrality agreements,” are under attack in the courts. The U.S. Supreme Court recently agreed to hear a case in which a lower court found that such agreements are a violation of the bribery prohibition in Taft-Hartley.

The court agreed with the National Right to Work Foundation’s astonishing claim that if an employer agrees to provide contact information for employees, for example, that is a “thing of value,” which Taft-Hartley forbids employers to give to unions. The Supreme Court will consider the case during its next term, which starts in October.

Over the last three years, hotel workers employed nearly every tactic of a modern corporate campaign against Hyatt.

Workers conducted several waves of short strikes, from a day to a week long, in the U.S. and Canada. They denounced the chain’s owners, the Pritzker family of Chicago, for conditions in the hotels, and disrupted various events supporting board members' chosen charities. Penny Pritzker, who had been President Obama’s fundraiser-in-chief during the 2008 campaign, distanced herself from his 2012 campaign partly because of the negative publicity.

The union pointed out that Pritzker family members have repeatedly insisted that Chicago lower taxes on their mansions—including Penny Pritzker’s own seven-bathroom house, on which she had appealed her taxes 10 times since 2006. Forbes estimates that Pritzker is worth $1.85 billion.

Pritzker also serves on Chicago’s school board, and Chicago Teachers Union members pointed out that this one-percenter was a source of woe for both Chicago's public schools and for hotel workers.

Housekeepers also denounced Hyatt’s record on worker injuries, which they called the worst of any major hotel chain, and created the “Hyatt Hurts” campaign to call attention to the impossible room quotas required of them.

As a result of the health and safety organizing, OSHA investigated injuries in Hawaii and California, and issued 18 citations and an unusual corporation-wide Hazard Alert Letter, telling Hyatt that its failure to provide long-handled mops and fitted sheets was injuring housekeepers at unacceptable rates.

Workers also pushed laws to reform Hyatt’s practices. In addition to the Long Beach ordinance, California workers are trying to get the legislature to make long-handled mops and fitted sheets mandatory. (They compare their struggle to California farmworkers’ successful effort to outlaw the short-handled hoe, another ergonomic nightmare.)

Hyatt has resisted fitted sheets, citing retooling costs in its laundry rooms, but hotel workers say that having to push king-sized sheet corners under heavy mattresses more than 100 times a day is the major cause of their disabling arm, shoulder, and hand injuries.

At first the union boycotted certain U.S. Hyatts, with union members actively arguing for guests to avoid their own workplaces. As a result, the hotels lost tens of millions of dollars in business, the union says.

Noting that the company’s growth areas are all overseas, the union enlisted Indian and Filipino hotel workers in the fight. The International Union Federation, which represents hotel workers internationally, last year signed on to UNITE HERE’s boycott of all Hyatt hotels worldwide.

Before the company’s annual meeting this spring, Kathy Youngblood, a Hyatt housekeeper from West Hollywood, conducted a campaign to be appointed to the seat on Hyatt’s board soon to be vacated by Pritzker.

“Why not fill her spot with someone who actually works in a hotel?” Youngblood asked in campaign stops around the country.

The tipping point may well have come when President Obama nominated Pritzker for U.S. Secretary of Commerce. In May, hotel workers went to Washington to protest her nomination. “The Department of Commerce needs leadership far different from that demonstrated by Ms. Pritzker at Hyatt Hotels,” said the union.

Chicago teachers piled on. "We cannot imagine that someone who has a long history of bludgeoning Chicago's working families and destroying public schools would be given a platform to continue these sorts of business practices on a national level," said Karen Lewis, president of the Chicago Teachers Union.

Pritzker waded into troubled political waters when she was briefly considered for the same post in 2008. She withdrew when her business dealings—including a Savings and Loan that sank in 2001—seemed likely to raise red flags among senators reeling from fresh banking scandals.

This time, the negative publicity likely broke loose obstacles at the negotiating table. The Hyatt settlement was largely agreed on by June 18. Pritzker was confirmed by the Senate a week later, and the proposed contract was announced July 1.