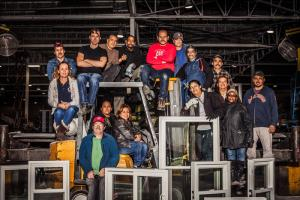 Workers say it's a new era as they become owners of their window-making cooperative. In 2008 and again in 2012 they occupied their factory to keep management from removing machinery. Now they own those machines. Photo: New Era Windows Cooperative.

They inspired the country when they sat down inside their Chicago factory in December 2008, and now they’ll have the chance to inspire us again—this time as worker-owners.

The workers who used to build windows at Republic Windows and Doors have bought the equipment from a cut-and-run owner. This afternoon marks the grand opening of their factory, New Era Window Cooperative, now housed in a former Campbell Soup plant for lower rent.

“We’ve defeated the obstacles in front of us before,” said Armando Robles, still president of United Electrical Workers Local 1110 at the plant. “By doing things like occupying the plant. Now we have a whole another kind of obstacles.”

The union will continue to represent the workforce. UE has, in fact, a co-op division for similar worker-run businesses. UE members have been to Mexico to meet with members of the co-op division of the FAT, the UE’s sister federation there. (For a detailed look at an industrial co-op in action, see our profile of a worker-owned tire plant in El Salto, Mexico: “Can Worker-Owners Make a Big Factory Run?”)

Production of samples has begun, with just 18 workers—way down from nearly 300 when Republic was at its peak—each of whom invested $1,000 in the business. The rest of the more than $400,000 necessary capital was raised by The Working World, a nonprofit that helps worker co-ops get off the ground in the U.S. and Argentina. Working World found nontraditional “socially responsible” investors who were willing to wait for the venture to pay off.

Working World founder Brendan Martin is the only co-op member who’s not a former Republic worker, and he is bringing needed expertise on use of the web and sales strategy.

Some workers raised their $1,000 stake from three months’ severance pay they received when Serious Materials, the owner that took over from Republic, closed down.

The plant will run without supervisors per se, Robles said. He expects some sort of in-plant leadership will be chosen by election, and there will be a board of directors. Wages have not been determined.

The plant will produce custom and standard replacement vinyl windows, Robles said, both residential and commercial. The co-op website advertises double-hung and picture styles—both with the tag “1110” as part of their brand name—for the local union.

Prices will be lower than those charged by Serious. The co-op will be competing against window factories belonging to former owners of Republic, who use only temp labor and pay no benefits.

Robles’s goal is for each worker “to learn every spot.” In the past at Republic, he said, people tended not to share their skills. Now he wants everyone to know all the jobs, even in the office. None of the workers—who include Latinos and African Americans, five women and 13 men—had done office work at Republic or Serious.

The co-op already has five orders and urges Labor Notes readers: “If you live in Chicago, buy a window!”

For more, see a 10-minute Democracy Now! interview with Robles and two other New Era worker-owners.

Related
Viewpoint: Confronting the Nature of Work »
How Lobstermen Formed a Union Co-op to Claw Back Fair Prices »
Steward's Corner: How One Union Uses Kitchen Table Economics to Advance Medicare for All »
Here's How to Join Labor's Anti-Coup Network »
Undergrad Workers Organize Wall-to-Wall at Kenyon College »