New Path to Citizenship Looks More Like an Obstacle Course 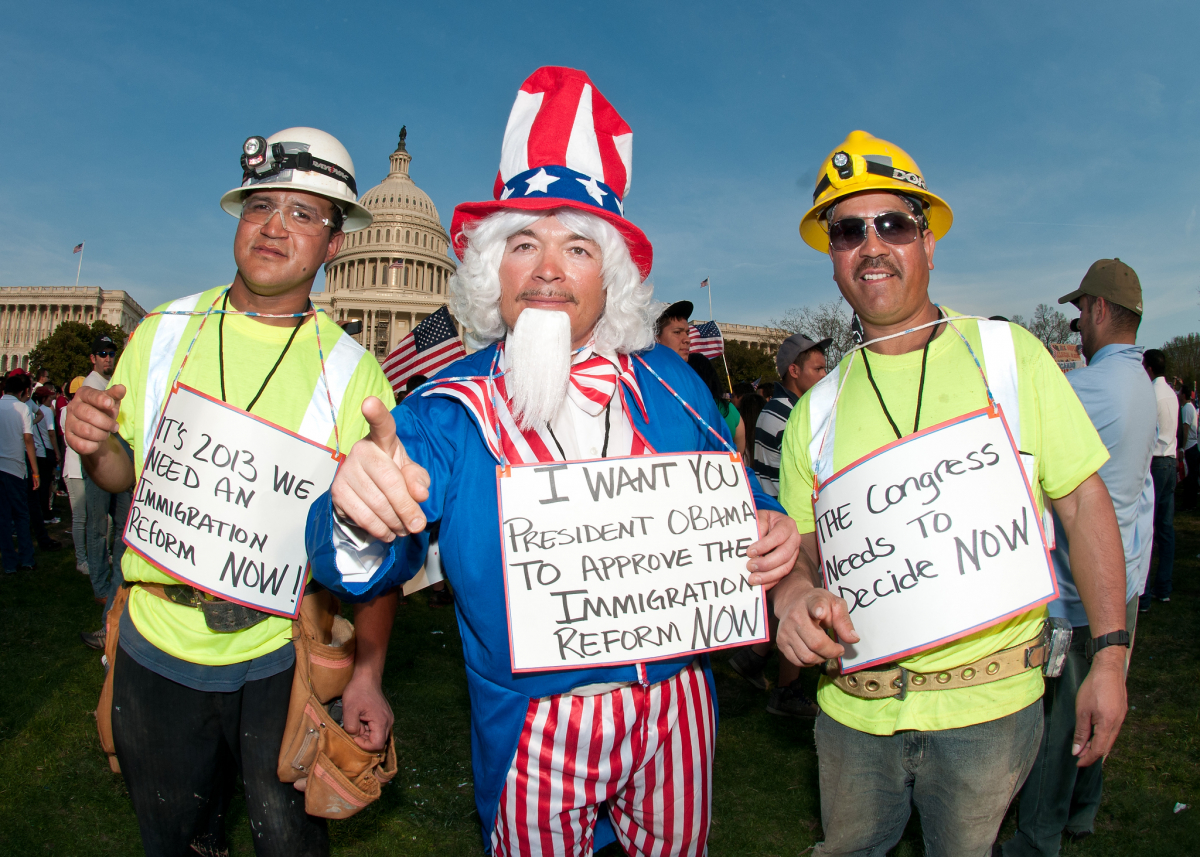 The bill proposed by the Senate’s Gang of 8 would create a Frankenstein process, a path to citizenship that is in reality an obstacle course. Photo: David Sachs, SEIU.

Claudia Muñoz is a brave young labor organizer and an undocumented immigrant. In April she set out to provide evidence that the government is violating federal guidelines by deporting “low-priority” cases.

When Muñoz made a U-turn on a Detroit bridge, she was promptly arrested and placed in jail. There she found her fellow detainees were indeed low-priority, mostly mothers with young children at home.

Muñoz reports Immigrations and Customs Enforcement (ICE) agents laughing at a man who resisted voluntary deportation because he didn’t want his children to grow up without a father as he had.

The background to this story is that in August 2011, to great fanfare in the Latino and immigrant communities, President Obama announced a new policy to focus deportations on those who had committed felonies.

He would suspend deportation of “dreamers” (current students and members of the military who’d been brought to the U.S. as children) and “low-priority” cases: immigrants who had a clean record or had committed only minor infractions such as traffic violations.

The immigration bill’s guestworker provisions were hashed out in contentious negotiations between the AFL-CIO (for fewer visas and higher wages) and the Chamber of Commerce (for the opposite). It appears the Chamber won more than many unions are letting on.

Guestworker programs give bosses huge power, since the visa lasts only as long as the job. They have been fraught with abuses such as steep recruitment fees, sub-minimum wages, squalid company housing, terrible work hours, and retaliation against organizers and whistleblowers.

Thus unions have historically opposed guestworker programs—while upping the number of visas has been on the Chamber’s to-do list for years.

For farmworkers, the bill would replace H-2As with new W-3 and W-4 visas. To come to the U.S., a worker would still need a job offer, but once here, he could switch to another employer in the program (though not stay unemployed more than 60 days). The bill would also increase oversight of job recruiters.

Farmworkers’ wage standard would change, probably for the worse.

H-2A wages currently have to meet or exceed a figure (set for each state) that is supposedly high enough to keep employers from replacing U.S. workers with guestworkers. The national average is now $10.80, but the bill sets new national minimums to begin in 2016, starting at $9.64 for crop workers.

A maximum 337,000 of these visas would be issued in the first five years; federal agencies would set the cap after that. Farmworkers already here could get onto a citizenship path, but those arriving in 2013 or later could not.

For other “unskilled” workers (landscapers, etc.), the bill would create a new W visa. After phase-in, the maximum number would be set by a new federal Bureau of Immigration and Labor Market Research—up to 200,000 per year.

W workers would be less vulnerable to deportation at the employer’s whim than H-2B workers are, since they could move between employers in the program (though, like farmworkers, they could not stay unemployed more than 60 days), renew their visas in three-year increments, and even get on a slow path to citizenship.

Wages would match what U.S. workers make at the same employer or industry. Workers on W visas would gain whistleblower protection, and could not be used to replace strikers.

However, the bill also contains a backdoor expansion of the existing H-2B program—where workers enjoy none of these new protections.

Employers looking to cut costs “will not use the W visa program as long as they can source cheaper, more exploitable workers through an expanded H-2B program—which is exactly what this bill gives them,” wrote Saket Soni of the National Guestworker Alliance.

“Without strong worker protections in all of these programs—not only the new W visa program, but all existing programs—this expansion is a recipe for disaster.”

For “skilled” workers such as engineers and IT specialists, the number of visas under the current H-1B visa program would triple from 65,000 to a possible 180,000 per year. The Communications Workers have been vocal critics of this program, which they say displaces their members.

But the new policy was only weakly enforced—reducing deportations by 2 percent over the following year.

In 2012, more than 400,000 immigrants were deported—a record. Only slightly more than half had been convicted of a felony or misdemeanor, and at least 90,000 were deported in violation of the new guidelines.

So at the same time Congress debates “comprehensive immigration reform,” organizations like Dream Activist and #Not1More are sending out continuous alerts to try to stop unwarranted deportations.

Eleven million undocumented immigrants live in the United States, desperately wishing to regularize their status and come out of the shadows.

The bill proposed by the Senate’s Gang of 8 would create a Frankenstein process, a path to citizenship that is in reality an obstacle course.

And that is the best Congress is likely to come up with, as amendments multiply the roadblocks.

The unhappy experience with non-priority deportations is about to be recreated on a larger scale, producing countless ways for individuals to struggle through the bureaucracy alone and leaving potentially millions by the wayside.

To appease the anti-immigrants, the first step the senators propose is border security, to be achieved through double fences, cameras, helicopters, and drones.

The goal is a 90 percent apprehension rate for unauthorized crossings, fully operational E-verify (the web-based system that compares information from job applicants with Social Security and Homeland Security records), and biometric entry (fingerprint, iris, or facial recognition) at air and seaports.

If these goals are not met, a commission of Southwestern governors will decide what additional steps are needed to control the border.

After that is achieved, immigrants who entered the U.S. prior to December 31, 2011 will have a window to apply for a new Registered Provisional Immigrant (RPI) status. Anyone deported in 2012 is not eligible. Approval is contingent on:

RPI status will last six years, and will allow individuals, their spouses, and families to work in the U.S. and travel outside the country.

When six years are up, RPIs must go through the original application process again, including paying fees and fines again. They must prove their average income has been 100 percent of the poverty level or they have equivalent resources, or prove they have held a job the entire time they held RPI status (unemployed no more than 60 days).

According to the Migration Policy Institute, more than a quarter of undocumented families have annual incomes less than $20,000. The federal poverty line for a family of four is $23,550, or $11.32 an hour for a full-time worker—higher than many immigrants’ wages.

The National Immigration Law Center calls the continuous employment requirement “a solution in search of a problem, especially since scholars and policymakers agree that undocumented immigrants come to the U.S. to work.”

That requirement invites abuse by employers, because it makes unemployment unthinkable for the worker. Layoff or firing becomes an even more powerful threat to hold over the heads of workers who speak up on the job.

In the Philadelphia restaurant industry, for example, up to 50 percent of workers in kitchens are undocumented, and they already report near-universal wage and hour violations.

The situation is even worse for those who can’t prove they worked—day laborers and domestic workers.

Ai-jen Poo of the National Domestic Workers Alliance reports that, in a survey of more than 4,000 low-wage workers in New York, Chicago, and Los Angeles, almost no undocumented nannies, maids, or housecleaners received pay stubs. Nor did 77 percent of garment workers. Proof of residence, she says, would be a fairer alternative for immigrants in the informal economy.

The work requirement would also exclude the estimated 40 percent of undocumented women who stay home with children, Poo points out.

After 10 years, RPIs may apply for permanent residency, again proving all of the above and paying another $1,000 fine. Now the applicant must also demonstrate progress toward English proficiency and continuous employment or resources at 125 percent of the poverty level.

After another three years—13 in all—an RPI may apply for citizenship.

Farmworkers follow a different process that takes 10 years. Dreamers who entered the U.S. before age 16 and completed two years of college or four years in the military will have an expedited path: after five years on RPI status, they may apply for green cards and immediately apply for citizenship.

Implementation of all these steps is far from immediate. They are contingent on clearing current immigration backlogs—meaning everyone who applies for RPI goes to the back of the immigration line—and on demonstrating that immigrants are no longer crossing the Mexico border illegally.

Although there is great trepidation that the House will seek to increase punitive measures, a few worker centers and unions are preparing to shepherd immigrants through the process.

Fraudulent legal services are likely to spring up, collecting fees from applicants who do not qualify, or failing to properly file valid claims.

But if the Obama reforms kick in, your inbox will still be flooded with alerts and pleas, perhaps to pressure an employer to certify employment—or to stop deportation for the millions who will fall through the cracks.

Teófilo Reyes works for the Restaurant Opportunities Centers-United worker center, which has many immigrant members.

The AFL-CIO and other groups are asking organizations to sign a petition at Stop Deportations to urge President Obama to suspend deportations.