Fight for May Day’s Two Traditions 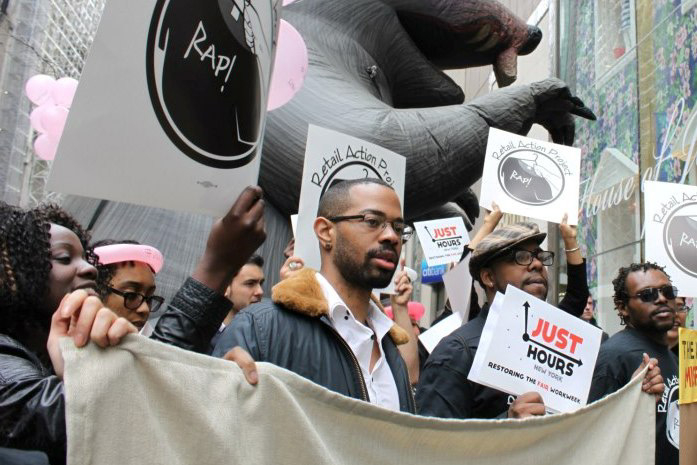 May Day started with the demand for the eight-hour day, and struggles over work time are again front and center as workers experience either drought or flood. Workers at the Juicy Couture retail chain delivered 5,000 petitions to the company's flagship store on Fifth Avenue in New York April 18, demanding more hours, and benefits. The workers are part of the Retail Action Project's "Just Hours" campaign. Photo: RAP.

Since 2006, May Day in the United States has come to mean immigrants’ rights. That was the year millions of people marched to stop a bill that would have made undocumented immigrants (and anyone who helped them) felons.

Many took the day off work to march—making that May Day the largest political strike in U.S. history.

Those immigrant marchers from Latin America undoubtedly knew more about the origins of May Day as International Workers’ Day than U.S. workers do.

On Saturday, May 1, 1886—a work day—35,000 Chicago workers walked off their jobs, demanding the eight-hour day for 10 hours’ pay. Strikes for the eight-hour day continued throughout the city, police rioted, and four workers who had led demonstrations (three of them German-born immigrants) were hanged.

A hundred years later, on May Day 1986, I was living in Guatemala City. Some workers at a small factory were on strike, resisting the 12-hour day their boss wanted to impose. A leader named Julio Coj spoke at a rally: “The martyrs of Chicago died for the eight-hour day, and we owe it to their memory to fight for it as well.”

I was moved to tears by Coj’s words—and embarrassed that so few U.S. workers had ever heard of “the martyrs of Chicago.”

Assault from Both Ends

Twenty-seven years further on, the eight-hour day is in worse shape than Julio Coj could have imagined—and it’s under assault from both ends. Some of us work stupefying amounts of overtime, willingly or no, and others can’t get enough hours to make ends meet. Everywhere, the trend is for management to demand “flexibility” to schedule the number of hours it decides on for a given day or week, with diminishing notice to the worker.

At least we get paid for all those extra hours, for now—but House Republicans have just introduced a bill with the Orwellian title “Working Families Flexibility Act.” The bill would let employers replace time-and-a-half overtime pay with time-and-a-half comp time. No worries, though: the bill forbids the boss to “intimidate, threaten or coerce” a worker to accept this arrangement. All you gotta do is say no. If you’re not worried about keeping your at-will job.

At UPS, which has the largest union contract in the private sector, some Teamster drivers have been agitating for a mandatory work-day of no more than 9.5 hours; 12 hours is not unusual for them, and those who try to keep it to 9.5 will find the boss riding with them in their truck. Their new tentative agreement may or may not address forced overtime.

In the auto industry, workers have fought unsuccessfully to “Stop the FOP”—a Flexible Operating Pattern that has them working 10 hours a day, four days a week, all at straight time. In this “Alternative Work Schedule,” two-thirds of the workforce is in the plant every Saturday. A third works two different shifts (day and evening) in the same week.

The Postal Workers’ 2011 contract took away the guarantee of a 40-hour job, giving management flexibility to establish work weeks anywhere from 30 to 48 hours. A worker’s regular schedule can be from six to 12 hours a day, with no overtime paid, and up to 10 percent of the clerk craft can work without a fixed weekly schedule, as “full-time flexible.” In practice, says Seattle APWU Vice President David Yao, the new options have been “a mixed bag, for both sides.” In some areas the union has used it to establish schedules that some workers actually prefer, such as four 10s.

Meanwhile a hiring freeze has many letter carriers working 10-hour days, six days a week, delivering letters after sundown to cover vacant mail routes. The contract prohibits delivery in the dark, reports recent retiree Jamie Partridge, but “they just settle all the grievances and pay people $50 each time,” since paying overtime and penalties is still cheaper than hiring more full-time workers.

In retail and fast food, meanwhile, management has workers on just-in-time non-schedules where they seldom get as many as eight hours a day. Companies like Jamba Juice, Pier One, and Aeropostale use software that predicts customer traffic based on the weather and other factors, and makes last-minute schedule changes in increments as small as 15 minutes.

A survey of 436 New York retail workers last year found that 70 percent didn’t know their schedules more than a week ahead of time and only 17 percent had a set schedule.

Walmart workers around the country are complaining that short hours are creating long lines and empty shelves while workers rush around trying to do more in less time. Walmart store managers get bonuses for keeping down payroll. OUR Walmart and the Retail Action Project—a project of the United Food and Commercial Workers—are fighting for more normal hours.

Warehouse workers at Fresh Direct, an online grocer in New York, say their shifts can last 16 hours—and that might be in a facility refrigerated to 38 degrees. But then they’ll be told to stay home the next day, to avoid overtime pay.

The Affordable Care Act is likely to make the short-hours problem worse. A higher education publication reports that colleges in Ohio, Virginia, New Jersey, and Pennsylvania have told adjunct instructors to keep their hours, including prep time, under 30 per week. That’s because the ACA, which takes effect next January, requires employers to grant health benefits to those who work 30 or more.

Long hours, short hours, or variable schedules don’t just make life miserable for the individual worker and her family. They also make it harder to take collective action. How do you call an after-shift meeting if no one’s shift is the same—or if the work-day is so long that folks can’t wait to get home? How do you socialize outside of work if you can’t find a time when everyone’s free?

In 1995 Labor Notes published a booklet called Time Out! The Case for a Shorter Work Week. Frankly, it wasn’t a big seller. Our readers at the time seemed more interested in working the o.t. than in cutting their hours to 35.

But a Ford worker at the Cleveland Engine Plant, sick of working nine- and 10-hour days, ordered a copy last year. “I gave it to my committeeperson [steward] and then my building chairman and told them both, ‘Read over and over until you get it,’” Teri Norris told me.

Norris’s plant worked the Alternative Work Schedule for 11 months, with mounting absenteeism, injuries, and workers’ comp claims. She made two motions at the local union meeting, for the local to support the eight-hour day, and to petition the international union to support it, too. They gathered more than 600 signatures.

A month ago, the eight-hour day returned to Cleveland Engine.

Get on the Bus

Unions and immigrant rights groups are joining together to march today. In 1886 Chicago, immigrant workers were at the forefront of the fight for decent hours. Today, many run from one part-time job to another, and another, and have even more reason than the rest of us to back the original May Day slogan.

Jane Slaughter is a former editor of Labor Notes and co-author of Secrets of a Successful Organizer.
Related
How We Began To Bring the Mail Back »
Ballots Out in UAW Presidential Run-Off »
2022 in Review: Harsh Conditions, Good Surprises »
Challengers Win Big in UAW Elections; Presidency Headed to Run-Off »
Viewpoint: Support Veterans by Defending, Not Defunding, Public Sector Jobs at the Post Office and the V.A. »