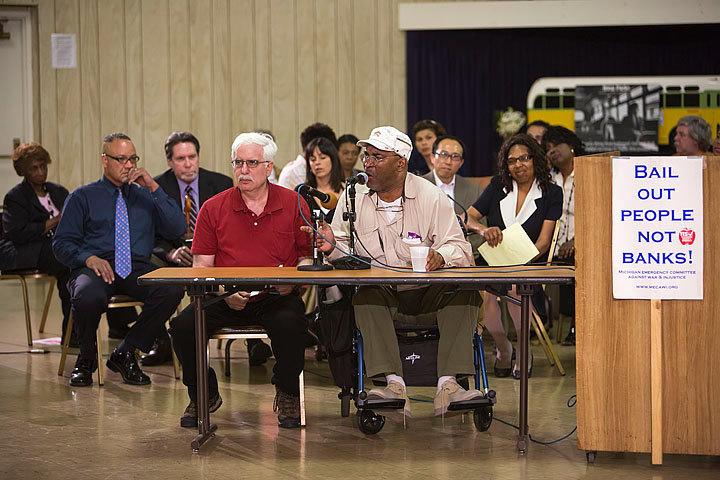 Phys ed teacher Baxter Jones, right, testified that Detroit Schools' Emergency Manager kicked him out without a pension after he was injured in an auto accident. Then Fannie Mae kicked him out of his house. Fannie and Freddie chickened out of the hearing and were represented by empty chairs. Photo: Jim West/jimwestphoto.com.

Detroit Eviction Defense, which has been working with homeowners to save their foreclosed-on homes for a year and a half, and the United Auto Workers convinced officials of Fannie Mae and Freddie Mac to come to Detroit last Monday. The UAW hired a bus to take these foreclosers through the city to see what eviction means to neighborhoods. Then at a People’s Hearing the representatives would listen to homeowners who’d been chucked out.

As the May 20 date approached, though, Fannie and Freddie officials got cold feet, citing negative comments on Facebook. Just 10 days before the event, they said their lawyers had advised them against the trip. To listen to homeowners would be “awkward,” the officials said.

Nonetheless, the People’s Hearing went on, with more than 20 homeowners, neighbors, and movement lawyers testifying to empty chairs. UAW Local 600 hosted the event, attended by 200 people and broadcast on local radio.

Over the last four years, Detroit has suffered from 70,000 foreclosures. According to the Department of Housing and Urban Development, 65 percent are still vacant, blighting and destabilizing neighborhoods. Laid-off city worker Thea Simmons testified, “My neighborhood went from beautiful to Beirut in four years.”

In 2012 alone, Detroit lost $1.347 billion in wealth because of the foreclosure crisis.

Fannie and Freddie Make It Worse

While most people understand that the mortgage banking industry caused the collapse of home values, few know the role that Fannie Mae and Freddie Mac—government agencies—play in encouraging banks not to negotiate to keep people in their homes. Although 43 percent of Detroit homeowners are underwater—they owe more on their mortgages than their homes are worth—which is twice the national rate, neither the banks nor the city tax office have adjusted the value of the homes to market worth. For example, Fannie Mae insisted a home was worth $140,000 when an assessor it hired listed its value as $19,600.

Detroit Eviction Defense, a coalition that grew out of Occupy Detroit, has been able to count on support and resources from the Metro Detroit AFL-CIO, the UAW International, and UAW Local 600 since the beginning. They have provided meeting spaces and underwritten union-printed leaflets, but most important, members have raised money, turned out to defend homes from eviction, come out to marches and rallies, and supported homeowners by packing court rooms.

Many of the homeowners fighting eviction are union members and retirees. Recent metro Detroit foreclosures where Detroit Eviction Defense has played a role include Jerry Cullors, a retired Teamster who sought a loan modification, Urealdene Henderson, a retired steelworker, Gregorio Martinez, a retired UAW member, and Baxter Jones, a former Detroit schoolteacher who suffered closed-head injuries in an auto accident and now uses a wheelchair (see photo).

What They Won’t Do

Fannie Mae/Freddie Mac were mortgage corporations that the federal government took over in 2008, at the beginning of the economic crisis. They are now managed by the Federal Housing Finance Agency, which has the power to reduce the principal on a mortgage and halt foreclosures—as they did in the aftermath of Hurricane Sandy.

But instead Fannie and Freddie encourage banks to refuse to modify mortgages, pushing them to evict families. Of the $606 billion spent by the government on its Troubled Asset Relief Program (TAFP) and FHFA bailouts, only $2 billion went directly to help homeowners. Fannie and Freddie are responsible for thousands of evictions—2,400 Detroit homes in April alone.

Three out of four homeowners who apply to the servicing bank for a mortgage modification because of unemployment or medical bills are rejected. Fannie and Freddie prefer to use taxpayer money to pay the bank the full value of the defaulted mortgage and allow the servicing bank to collect late fees. Their loyalty seems to be to the banks that caused the economic crisis in the first place.

Not only are FHFA officials opposed to reducing the principal on inflated mortgages, but they also refuse to allow homeowners to buy their houses back at the sheriff's sale. There, the house could be purchased for a market or below-market price. Instead the houses are sold to equity firms or real estate companies that turn them into rental properties. Or they sit empty, targets for being stripped. That—and arson—is the usual fate of empty houses in Detroit.

All the testifiers at Monday’s hearing had been hurt by Fannie or Freddie. Angela Crockett, an engineer laid off from the auto industry, testified that while she was still making payments through a program for unemployed homeowners, CitiMortgage foreclosed—after promising they would not. She found out only because her insurance agent told her the policy was canceled.

Jerome Jackson has been in a wheelchair since he was a child. He testified that Fannie Mae won’t allow PNC Bank (backed by Fannie Mae) to sell him his home at market value.

Thea Simmons, who’d belonged to AFSCME, outlined a nightmare scenario of lost paperwork, delays, denials, and misreadings of the law beginning in 2009. She is still in court and still in her house only because of a sympathetic judge.

Bank of America kept losing the papers Vietnam vet Ray Mandry sent in to obtain a loan modification. Attorney Vanessa Fluker explained that banks are paid for each step of a loan modification, so multiple steps are not a problem for them.

Karen Hammer of Greenacres, Maria Thomas of Island View, and Karen Washington of Restore Northeast Detroit—neighborhood organizations—spoke of how empty homes were destabilizing their areas of the city.

Marilyn Mullane from Michigan Legal Services pointed out that the banks refuse to negotiate with homeowners—they have a “no exceptions” policy—but once they take possession of properties, they are willing to sell below market value to investors. “It is easier for them to evict and see the house demolished than to deal with the owner,” Mullane said.

When Rev. Ed Rowe from Central United Methodist Church said, “If a human being did to a city what the banks are doing to this city, we would call it terrorism,” the crowd clapped and hollered their approval.

Cindy Estrada, vice president of the UAW, announced that Fannie and Freddie had agreed to watch the videotape of the hearing (!) and to meet with UAW officials in Washington for a follow-up discussion. Detroit Eviction Defense is discussing a “You can run but you can’t hide” action against Fannie and Freddie, chasing them to their offices in Chicago or Washington.

The devastation caused by the collusion of banks and government agencies can be stopped if homeowners, neighbors, and unions can force Fannie Mae and Freddie Mac to: