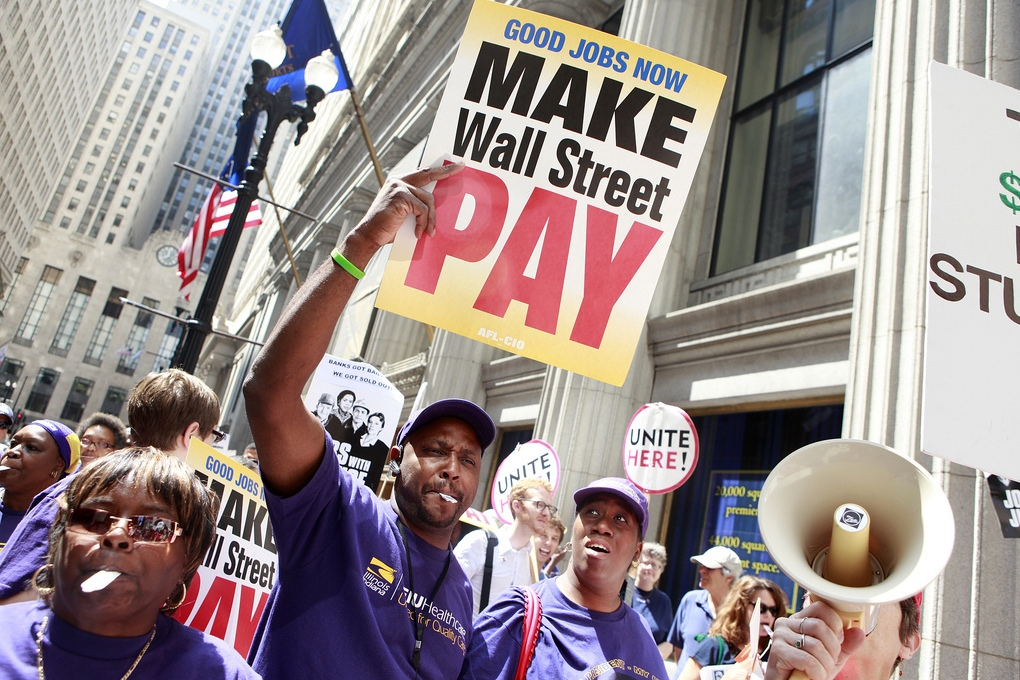 Service Employees and hotel unionists marched in Chicago for a jobs program. States are cutting back on unemployment benefits and forcing recipients to take lower-paid jobs. Photo: Progress Illinois.

When Bill Clinton and Newt Gingrich collaborated to “end welfare as we know it,” they made a sharp distinction between people on welfare and the unemployed. Welfare recipients were described as the undeserving poor, who needed to be weaned from unearned entitlements and taught the discipline of work.

By contrast, unemployment insurance (UI) recipients were working- and middle-class Americans unemployed through no fault of their own, whose work ethic had been proven through long years on the job.

The prescription for welfare recipients was to force them to work—in any job, at any wage. States cut education programs on the theory that what poor people needed—all they needed—was the discipline of a boss.

As the American Enterprise Institute argued, “Any entry-level job teaches the important skills of showing up for work, regularly and on time… prepared to cooperate.”

Indeed, the politics of welfare reform partly turned on the willingness of employed people, who are all potential UI recipients—proud of their own histories of hard work and self-support—to embrace the idea that people on welfare were different, deserving not of government support but of the tough love of a low-wage boss.

Twenty years later, the arguments used to end welfare have been turned on the unemployed.

In 2011-12, 16 states adopted UI “reforms,” cutting both the value of weekly benefits and the number of weeks they are available. Corporate lobbies argued that paying for UI was unaffordable at a time of recession, but their agenda was driven by more than a desire to save tax dollars.

Under Tennessee’s new law, for instance, laid-off workers may hold out for jobs that pay the same as their previous position for only 13 weeks. After that, they must accept any job that pays at least 75 percent of their previous wage; the cutoff drops to 70 percent after 25 weeks and 65 percent after 38 weeks.

UI benefits average $300 a week—the equivalent of less than $16,000 per year—so there is already plenty of incentive to find work. But once someone takes a low-wage job, it is extremely difficult to keep looking for the higher-wage job that will serve the recipient better in the long run.

More important from employers’ point of view, forcing tens of thousands of workers to take low-wage, no-benefit jobs floods the market and drives down employment standards in the local economy.

The most extreme unemployment measure may be an Oklahoma proposal that would have required anyone receiving UI to do 20 hours a week of unpaid “community service.” The bill did not pass—but it fits with similar laws adopted elsewhere.

In 2003, Georgia pioneered a program that encourages UI recipients to volunteer for unpaid work in private companies for up to six weeks, 24 hours per week. Last year, Pennsylvania adopted the same model, dubbing the unpaid work “skill enhancement.”

For now, the programs are voluntary. But it’s easy to imagine future ones that might, for instance, offer extended UI benefits only to those who have proven their dedication through unpaid labor.

Here, the rhetoric once reserved for welfare recipients has been turned on the unemployed. The conservative National Review argues that “the longer people stay unemployed, the more they lose… the habits of work.”

Economist and pundit Ben Stein insists that what the long-term unemployed most need is simply work itself: learning to address people as “sir” and “ma’am” and being schooled in the importance of “not talking back.” The “skills” employers want people to learn are not those that give them bargaining power in the labor market, but those that impart the habits of submission.

The fact that corporate-backed unemployment “reform” is about discipline is even more apparent in recent laws that use UI to extend control over current employees.

Traditionally, unemployment benefits can go to any laid-off employee not guilty of “misconduct.” By law, simple failure to meet production quotas, for example, cannot be deemed misconduct unless it represents a “willful and wanton” refusal.

In the past two years, however, four states have rewritten their laws to vastly expand the definition of misconduct.

In Arkansas, the Society of Human Resource Managers successfully promoted a bill that redefines misconduct to include “violation of any behavioral policies of the employer.” Tennessee adopted similar language, with the enthusiastic support of the Chamber of Commerce. The statute specifically defines absenteeism as a form of misconduct.

The National Federation of Independent Business quickly notified member companies that they should “make sure you have a written attendance policy that each employee has reviewed and signed,” so that unexcused absences may be used to terminate employees and then deny them UI.

Florida, too, redefined misconduct to mean violation of any “reasonable standards of behavior which the employer expects.”

In the summer of 2012, a Florida lifeguard was famously fired for running to the rescue of a drowning man who was located outside the zone his employer was contracted to patrol. “We have liability issues and can’t go out of the protected area,” explained his supervisor. “He knew the company rules.”

Under the new law, such heroism may not only get Florida lifeguards terminated but also be deemed “misconduct” that renders them ineligible for unemployment benefits.

PATROL YOUR OFF HOURS

Florida went even further, declaring that employees may be ineligible for UI “irrespective of whether the misconduct occurs at the workplace or during work hours.” Thus if the company has a policy against employees dating one another, or posting work-related comments on a personal Facebook account, ignoring these rules may leave workers cut off from UI.

In this way, corporate lobbies are using UI reform not only to limit the prerogatives of unemployed people, but also to dramatically increase control over those still on the job.

When President Clinton abolished the right to welfare, he made a political calculation that Democrats could abandon the poorest Americans without paying a significant political price. Twenty years later, lawmakers are making a similar gamble that unemployed people can be cut off from public support without provoking a backlash. It’s up to us to prove them wrong.

To read about the related attack on disability benefits, click here.

Gordon Lafer works at the University of Oregon’s Labor Education and Research Center and is a research associate with the Economic Policy Institute.