Viewpoint: A Strategy Based on Strikes Means Breaking the Law 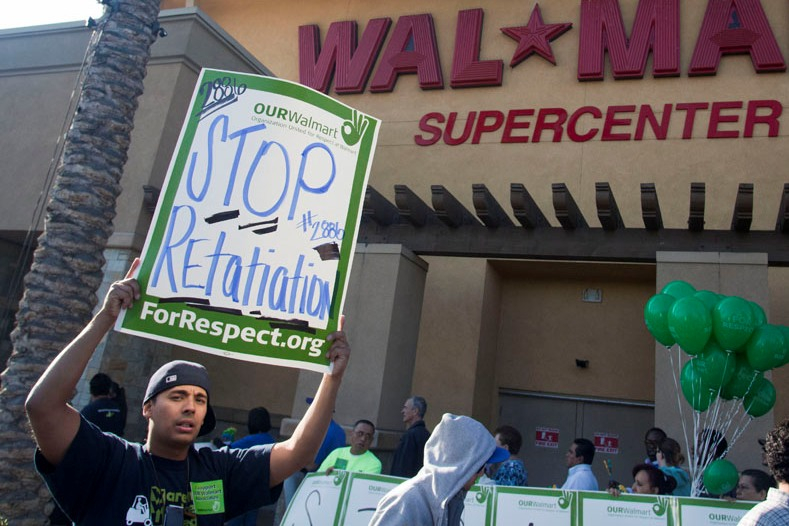 Walmart store and warehouse workers struck briefly and legally late last year, including at this store in Pico Rivera, California. But you can't follow labor law and expect to win much. Photo: Aurelio Jose Barrera.

It was a welcome arrival on the labor scene late last year: an organizing strategy centered on workplace activism and strikes. Unions set their sights high, taking on the fast food industry in New York, massive warehouse complexes near Chicago and Los Angeles, and even the nation’s largest employer, Walmart.

The strategy focuses on building organization inside the workplace, rather than on a rigged National Labor Relations Board (NLRB) election process. By strategically striking, a group of activists can convince their co-workers that fighting back is possible, raise publicity for their struggle, and pressure employers into granting concessions.

It’s a very traditional strategy, reaching back to a time when a union meant people coming together. With the advantages of a fresh perspective and strong community ties, these emerging forms of worker organization represent new hope for the labor movement.

In the long run, however, it is hard to envision this strategy succeeding unless workers challenge and, if necessary, violate labor law. AFL-CIO President Rich Trumka stated it well in the early 1990s: “The labor laws in this country are formulated for labor to lose. And if you play by every one of those rules, you lose every time.”

SHOT ACROSS THE BOW

Walmart has already pulled one such arrow from its quiver. Prior to November’s Black Friday strikes, Walmart asked the NLRB for an injunction against them. The National Labor Relations Act says it’s an unfair labor practice for a union to picket for more than 30 days without filing for a union election.

The charges were settled, with the Food and Commercial Workers union publicly stating that it was not trying to form a union at Walmart, that it would refraining from picketing for 60 days, and that it would not contest a temporary injunction if the NLRB seeks one down the road

This move signals that Walmart has every intention of relying on its advantages under labor law to thwart the promising strike strategy.

What are those advantages?

Repeated short strikes are essential to the emerging strategy, but federal courts ruled long ago that workers can be fired for repeated short strikes. As AFL-CIO General Counsel Craig Becker pointed out in the 1990s, these decisions are based not on the text of the NLRA but on the idea that such strikes would be too effective.

A related hurdle is the rule that allows employers to permanently replace strikers. In key battles during the 1980s, this rule proved decisive in breaking strikes.

And secondary strikes and certain boycott activity were outlawed by the 1947 Taft-Hartley Act. The retail giants lean on their web of subcontractors in the warehouses that deliver to the stores—few warehouse employees work directly for Walmart—and store workers will need solidarity to cut through such shifting corporate forms.

For now, retail workers have positioned themselves smartly by striking over employers’ unfair labor practices. Legally, ULP strikers cannot be permanently replaced, and they avoid restrictions on intermittent strikes.

Ultimately, though, the goal must be to force concessions from employers, big enough concessions to convince workers of the benefits of unionization. It is unlikely that legal, short-duration, harassing strikes can force such concessions from the nation’s largest corporations.

Unions cannot escape the fact that effective strikes will mean civil disobedience and illegal tactics that disrupt business as usual.

We can look to history for guidance. In 1958, there were only 15 public employee strikes in the entire nation. Public employee unions were weak and ineffectual. Their leaders did not believe in the right to strike, and most union constitutions prohibited striking.

Yet a generation of union reformers fought for a change in strategy. They removed the strike prohibitions from their union constitutions and boldly asserted their right to violate injunctions.

In one of the greatest campaigns of civil disobedience in U.S. history, between 1 million and 2 million public workers engaged in illegal strikes during the 1960s and 1970s.

Through this illegal strike wave, public workers won contracts, improved the lives of public employees nationwide, and even forced reluctant legislatures to legalize striking in many states. Union density in the public sector rose from 9 percent in the late 1950s to almost 40 percent in the mid-1970s.

Breaking free from the legal restrictions surrounding strikes will not be easy, but the first step is calling things what they are. Restrictions on picketing are restrictions on our right to free speech: censorship, pure and simple.

Judges use a variety of rationales to justify their censorship of workers, including saying that picketing is somehow not real speech or is not truly political speech.

That is ridiculous. A picket is words on a sign that communicate a message: to the employer, to the public, to fellow workers. And unionism is intensely political, dealing with the distribution of wealth in society—exactly the kind of speech the constitution was intended to protect.

Yet in the wake of the Walmart injunction, the labor movement has been virtually silent about these restrictions on freedom of speech.

TO BREAK THE LAW

The success of any strike-based strategy hinges on the labor movement’s ability to reject illegitimate constraints and embrace the violation of restrictive labor laws.

Here again retail workers can point the way. After Shalonda Montgomery was fired in retaliation for last fall’s one-day fast food strike in New York, restaurant workers and supporters briefly took over the lobby of a Brooklyn Wendy’s until management reinstated her.

Likewise, when owners of the Hot and Crusty sandwich shop in New York closed in retaliation for forming a union, workers relied on direct action—including a sit-in by Occupy Wall Street allies, with six arrests—rather than the NLRB. They forced the store to reopen and sign a union contract.

The January court ruling that may invalidate past and future NLRB decisions for lack of a quorum should provoke discussion about breaking free from the rules of the game.

After all, anti-labor forces are trying to keep the NLRB from enforcing even the minimal protections of labor law. That gives worker organizations a strong moral argument for violating the law ourselves.

Why should we be obliged to follow a set of labor laws that Congress and the courts refuse to enforce?

[Joe Burns is a labor attorney and negotiator and the author of Reviving the Strike, available from IG Publishing. His book on the public employee strike wave of the 1960s will be published in spring 2014.]

CORRECTION: This article has been changed from its print version to clarify which solidarity tactics were outlawed by the 1947 Taft-Hartley law. The original text "sympathy strikes and secondary boycotts" has been corrected to "secondary strikes and certain boycott activity."

A version of this article appeared in Labor Notes #409, April 2013. Don't miss an issue, subscribe today.
Related
Auto Workers Turn a Corner for Strike Pay and Democracy »
Recent Books of Note for Labor Activists »
St. Louis Boeing Plant Workers to Strike »
Every Boss Has a Weak Spot. Find and Use It. »
What Can Unions Do Now to Defend Abortion Rights? »