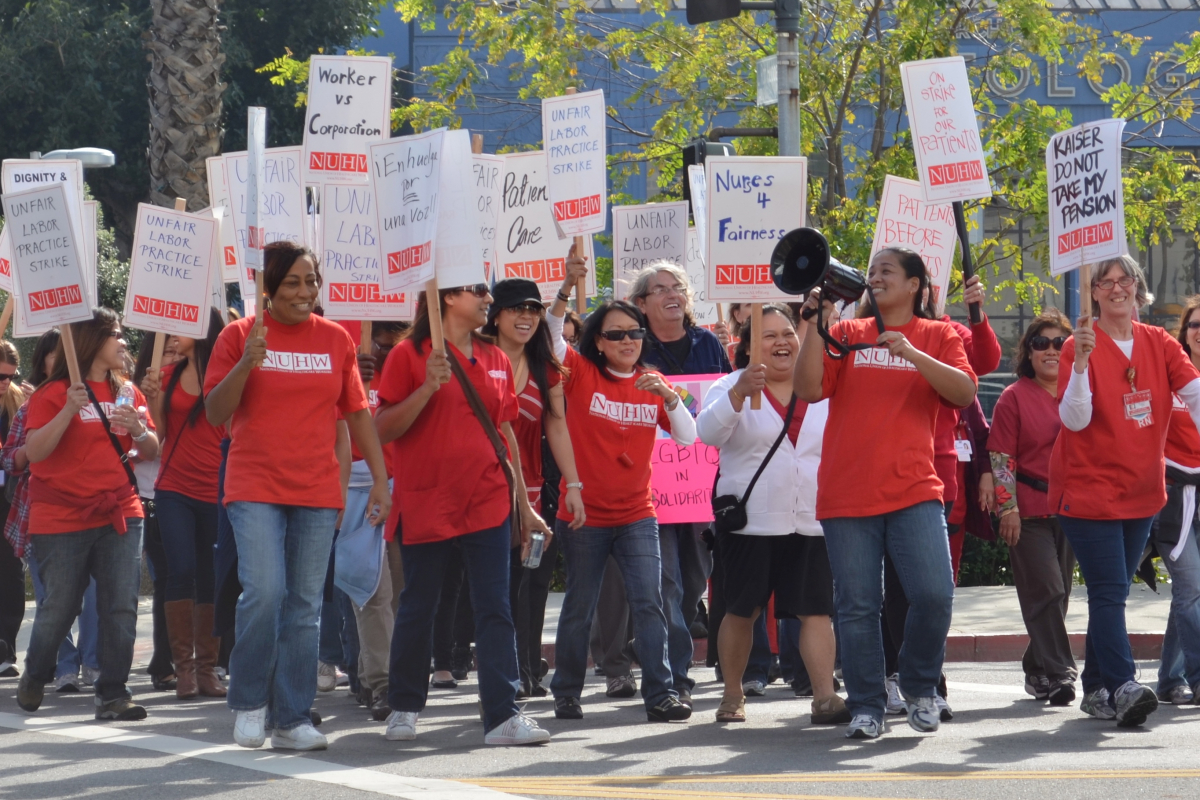 Kaiser professional workers in the upstart NUHW marched in one of several short strikes against concessions. A much larger Kaiser group will vote in April whether to join them in NUHW. Photo: NUHW.

In Antioch, California, Angela Glasper walks through the Kaiser Permanente medical center talking to fellow employees about an upcoming vote between two unions. For years she represented her worksite in negotiations and defended co-workers in grievance meetings. Now she hopes they will listen to her and vote for the National Union of Healthcare Workers.

“This race is going to be won on truth and relationships,” Glasper said.

Kaiser workers will vote whether to change unions in April, four years after their local, United Healthcare Workers West (UHW), was trusteed by their international, the Service Employees.

Kaiser is the massive nonprofit health plan and chain of medical facilities that dominates California medicine, with 7 million enrollees. Forty-five thousand of its 100,000 employees belong to UHW.

Glasper is a cashier in the optical department. Before the 2009 trusteeship, she was on the local’s executive board and a steward. She was active in resisting SEIU’s takeover and has worked hard to build support for NUHW, the new union formed by the leaders removed from office.

The split occurred over approaches to organizing and contract standards. NUHW leaders say the SEIU international’s growth strategy was to offer concessions to health care employers in exchange for less resistance during organizing drives.

The immediate cause of the rift was the international’s plan to break off 65,000 of UHW’s 150,000 members, those in nursing homes and homecare, and assign them to a statewide local with inferior contracts. SEIU argued that a unified long-term care local would have more power.

Ironically, after the trusteeship, the split-off was never implemented.

After the trusteeship, NUHW supporters gathered signatures of members who wanted to join the new union, arguing that it would maintain not only contract standards but also independence and democratic practices. A vote was held in September 2010.

UHW won handily, 18,000 to 11,000. Many members were afraid to upset what had been a comfortable status quo, with the best contracts in California health care. But the National Labor Relations Board tossed the result.

The key ruling was that Kaiser intentionally denied raises owed to a separate group of professional employees who’d opted for NUHW, to make an example of them and encourage the majority to stay with management’s preferred union, UHW.

The board also found that UHW had falsely threatened members with loss of scheduled raises if they joined a different union.

During the 2010 election, SEIU flooded the hospitals with get-out-the-vote staff, many of them flown in from elsewhere. As the incumbent union, those staffers had more time and access than NUHW organizers to talk to employees inside facilities.

To make up for the imbalance, this time Glasper is doing more legwork, on her own time, to stay in touch with supporters. She calls it turning people from purple—SEIU’s color—to NUHW’s red. “I don’t say, ‘Well, this person is red, I don’t have to worry about them,’” she said. “I revisit these people weekly.”

NUHW has added resources and staff for the second go-round, thanks to its recent affiliation with the California Nurses Association (CNA), which counts nurses in Northern California Kaiser facilities among its 80,000 members. The affiliation also means nurse leaders inside the facilities are building support for NUHW.

Kaiser members have long been UHW’s backbone. Their dues have funded organizing new members into the union. They have fully paid health insurance and a pension, and until last year a fully funded retiree health plan.

Winning the election is crucial for both unions. If UHW is defeated, it will lose a third of its members and give its remaining hospital workers reasons to leave. If NUHW wins, its membership will increase fivefold.

Many members at Kaiser see the fight as more than just a turf battle. “A lot of people are saying, ‘When are we voting?’” said Frances Foley, a cardiology echo technician near Los Angeles.

Foley said members complain that their union reps “side with managers, they don’t follow the contract. Bottom line: I want to take my union back.”

Members have had three years to see the differences play out in their worksites. Under trustee and then President Dave Regan, UHW has dramatically shifted its focus from local worksite issues to corporate-level relationships.

“People are getting disciplined every day for things that, when I was a steward, you could pick up the phone and fix,” Glasper said. “Now you have members that are going to be suspended or fired, they are looking for representation, and there is nobody to be found.”

“We have no union basically, that’s what it’s like,” said Carla Garcia, a receptionist. “Now all of a sudden they are showing up at campaign time.”

Glasper, Garcia, and Foley were among hundreds of stewards who either resigned or were removed because of their support for NUHW.

Labor Notes asked UHW to put us in touch with rank-and-file supporters but received no response.

UHW leaders’ central argument is that members should stick with the union that bargained their contract—a contradictory claim, since they are taking credit for decades of bargaining by the officers they removed.

“They go around telling people, ‘If you vote for NUHW, you will lose your contract and benefits,’” said Garcia, “which is a lie.” Labor law protects workers who change unions by preserving the conditions in the existing contract until a new agreement is reached.

The latest agreement, from May 2012, gave members a 3 percent raise each year for three years. But the union also agreed to cap retiree health benefits down the road. And it added a “partnership tax,” 9 cents for every hour worked, paid back to Kaiser to manage its elaborate partnership structure with the union—moving $6 million in costs over three years onto employees.

UHW also agreed to team up with Kaiser on a “wellness” initiative. The program tracks such factors as body mass index, weight, and cholesterol, then enlists employees as workplace leaders in bringing these numbers down.

“We know their underlying intentions are eventually to make us pay for our benefits,” Garcia said.

Diane Barton, a pharmacy tech in Santa Clara, was a UHW board member and was on the 2012 bargaining team. She complains that union officials negotiated behind closed doors.

“They bring us in the very last day of bargaining, and they said, ‘This is what you are going to get.’ And we go home,” she said.

In the last four years, NUHW has recruited 10,000 members, including smaller groups of Kaiser employees—nurses and social workers—and non-Kaiser hospitals in Salinas, Santa Rosa, Tarzana, Los Angeles, and San Francisco. In those hospitals, members have fought hard against employers’ push for concessions.

Many settlements were reached after long contract fights, multiple pickets, and strikes. Most recently NUHW settled with the California Pacific Medical Center in San Francisco, undoing many concessions UHW had agreed to. The union won back protections against subcontracting, and stronger job security.

But Kaiser has resisted settling with its smaller units, despite several short strikes. CNA nurses joined NUHW members in sympathy strikes in 2012.

UHW has tried to capitalize on Kaiser’s refusal to settle with NUHW. Its message is that all NUHW and CNA do is fight with employers, never winning contracts.

Deborah Burger, a CNA co-president, said her union wants to help members replace SEIU because leaders are letting Kaiser get away with subcontracting and cutting staff.

“Patient care assistants are taking on more and more of a workload,” Burger said. “They [Kaiser] are not replacing people who are sick.”

This in turn affects nurses’ work and patient care. “You have a patient waiting in the hallway and you can’t get the patient in because the housekeeper hasn’t cleaned the room,” she said, “and that’s because we are short-staffed.”

Worse, despite the fact that it’s expanding, Kaiser recently announced layoffs of 1,000 employees. UHW points out that the contract’s job security language allows up to a year before Kaiser can eliminate any position, allowing time to place each employee in a new job. But NUHW supporters say Kaiser shouldn’t be laying anyone off, and accuse UHW of secretly agreeing to the cuts behind closed doors.

CNA says the givebacks in last year’s UHW contract were unnecessary. “We got 5 percent raises. We wouldn’t agree to layoffs,” said Burger of CNA’s 2011 deal. “We were adamant we weren’t going to take takeaways because, even in the recession, Kaiser was making money”—$2.6 billion in net income last year.

Regan further angered nurses when he campaigned, together with hospital lobbyists, to roll back state-mandated nurse-to-patient ratios that CNA had won in 1999. He claimed this would ease the state’s financial woes and prevent layoffs of UHW members.

“It’s very clear that the ratios save patients’ lives,” said Oakland nurse Katy Roemer. “That was amazing. This is someone who is willing to go after another union’s hard-fought gains.”

Ballots will be mailed to workers’ homes April 5 and counted May 1.

NUHW members say its staff and supporters are still being denied equal access to break rooms and public areas in Kaiser facilities, though nurses are helping on the inside. The union faces an uphill battle to get workers who enjoy good wages and benefits to vote against the status quo.

But Barton hopes the last three years have given members the opportunity to see for themselves. NUHW may have lost the last election by 7,000 votes, she said, but “there are a lot of people—more than 7,000—that have had broken promises by SEIU.”

Samantha Winslow was an organizer at UHW for five years, until the trusteeship. She then volunteered for NUHW. Alexandra Bradbury contributed to this article.

A version of this article appeared in Labor Notes #409, April 2013. Don't miss an issue, subscribe today.
Related
As Omicron Rages, Teachers and Students Fight for Safety Measures in Chicago and Elsewhere »
Steward's Corner: Using Pressure to Settle Grievances »
UPS Drivers Stage a Walk-in to Defend a Fired Co-Worker »
Christmas On Strike: Warrior Met Miners Stick It Out »
Whatever Happened to 'Eight Hours for What You Will'? »