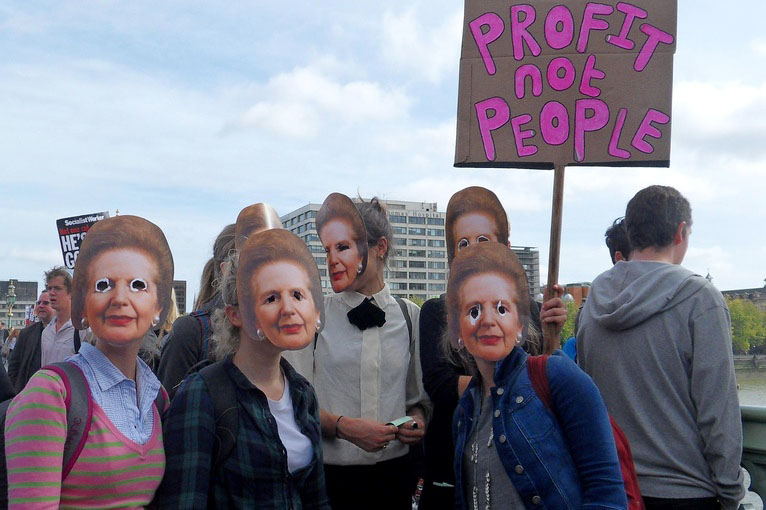 Londoners will be gathering again in Trafalgar Square this Saturday to celebrate the death of “Maggie Thatcher, Milk Snatcher.” Now that she’s well and truly “out,” how do we define what she left behind?

The 1980s “Gone with the Wind” poster depicting Ronald Reagan and a coquettish Thatcher in his arms sums up the fact that, while the U.S. president lacked the intellect and analysis of his British counterpart, his strategies neatly dovetailed with hers.

The 1980s were the years when the ruling class came out in open rebellion against the post-war politics which had, particularly in the 1960s and 1970s, provided the beginnings of a decent standard of living for workers.

That standard of living was due to trade union power: the workplace organization and action that saw an upsurge in those decades, and with it, what now seem like unbelievably high levels of union membership. As British newscasters put it when mulling over the life and works of the Iron Lady, she “tamed the union barons”—and the faithful Ronald followed in her footsteps by axing PATCO and overseeing a spate of NLRB decisions which milked that body of any trace of union tolerance.

Thatcher and her buddies went further, introducing a series of anti-union laws which from the beginning, in 1980, struck at workplace unionism’s lifeblood—solidarity. This first step in the notorious “salami” strategy (previous governments had tried to destroy trade union effectiveness all in one go, and failed) was followed most damagingly in 1984 with a Trade Union Democracy Act which did the exact opposite of what its name suggests.

Trading on the fact that few union members attend their branch (local) meetings, the Tories brought in long-desired bans on mass meetings at the workplace. They substituted instead individual secret mail ballots, which put up serious barriers to actual union democracy in the workplace. Ironically, these ballots have now become a weapon for unions, to indicate members’ willingness to strike. But that is small consolation in the wake of a catastrophic fall in union membership and a levelling off of strikes.

The Living Standards that Used to Be

Thatcher, of course, did not aim her fire only at the trade union movement. She and her supporters’ most deadly weapon was “monetarism,” soon known as neoliberalism. These policies were a direct contrast to the relatively generous Keynesian economics which reigned in the wake of the Second World War. Britain had basked in a free National Health Service, widespread low-rent public (council) housing, and free education up to and including university. Thatcher enacted sharp cutbacks to public spending and restricted lending to industry in order to reduce inflation.

As a result, employers were handed a powerful weapon against union power as factories folded and unemployment rocketed across the land. The most effective shop floor organization was in manufacturing, and it was here that Thatcher’s scorched-earth policies were immediately directed. Along with resolute opposition to keynote strikes like the steelworkers’ in 1980, this government stand left union members and officials reeling.

By 1983, the TUC (Britain’s equivalent of the AFL-CIO) had broken promises to defend striking workers and was adopting a policy described as “New Realism”—supposedly a practical response to the avalanche of government attacks.

Symbolically, while both Tory and Labour governments had in the past met trade union leaders and employers in a tripartite body quaintly named “Neddy” (National Economic Development Council), Thatcher abandoned all that.

Thatcher famously intoned, “There is no such thing as society. There are individual men and women, and there are families.” Her regime moved far and wide to undermine the government fabric—free health care, education to university level, widely available “council housing”—that had boosted social equality in the years since the Second World War.

As a 1950s child, I “enjoyed”—if that’s the right word—free cod liver oil, malt, and milk. Thatcher’s removal of the last of these gave rise to the ubiquitous slogan “Thatcher, Thatcher, Milk Snatcher.”

Not only did she snatch free milk (as Education Secretary in the Tory government of the early 1970s), she deprived the “non-society” she ruled of so many other things. After her narrow victory as Prime Minister in May 1979 she moved rapidly to introduce the “Right To Buy” for council tenants, a much larger group than those in public housing in the U.S. Working people today are suffering a colossal housing crisis as a direct result.

She moved on the generous national health benefits to undermine optical and dental care. In an uncharacteristic failure, she tried to replace household rates (local property taxes) with a one-fits-all “poll tax” which, just like a similar ruling in the 13th century, was defeated by a popular uprising—in this case a huge demonstration in London’s Trafalgar Square.

Londoners will meet in the same square this Saturday. They will remember workers whose lives, opportunities, and hopes for their children’s future Thatcher destroyed. Politicians of left and right have gathered to express their condolences. It’s left, as always, to the people themselves to express the true epitaph.

Sheila Cohen is a long-time trade union researcher and activist who specializes in on-the-ground workplace struggles and workplace union democracy.

Related
Viewpoints: How Academic Workers’ Leverage Can Grow in a Long-Haul Strike »
Every Union Contract Right Now Should Be the Best Ever »
Could We See a Rail Strike? »
Undaunted by Fines, Massachusetts Teachers Defy Strike Ban »
How to Win NLRB Cases against Union-Busters »