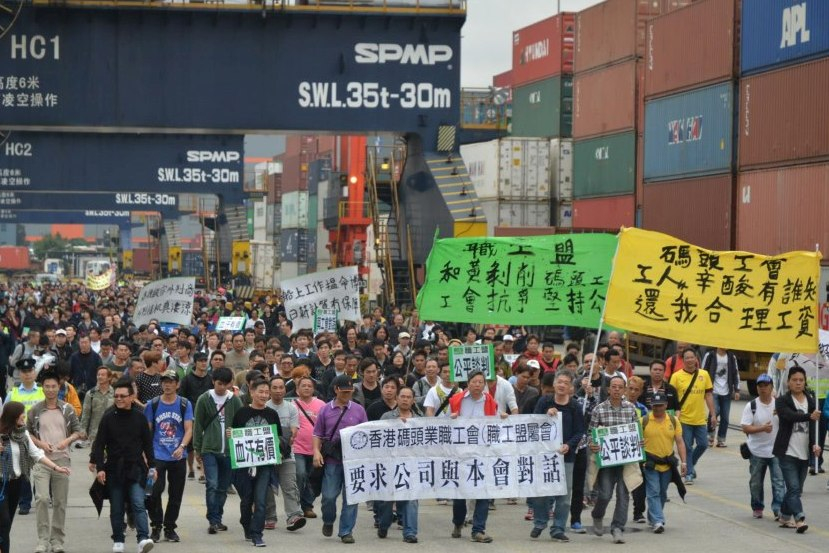 UPDATE, MAY 7: After 40 days, the dockworkers have ended their strike with a settlement including a 9.8 percent wage increase. More details and an interview with a strike leader are here.

Five hundred dockworkers are facing down the richest man in Hong Kong (and, according to Forbes, eighth-richest in the world) in a strike that has entered its third week and brought transport in the world’s third-busiest port to a virtual halt.

Arrayed against this financial titan often referred to as “Superman” are dockworkers exhausted by 12-hours shifts lacking even toilet breaks, surviving in one of the world’s most expensive cities on wages that haven’t risen in 15 years, and now waging a labor battle that observers are calling pivotal.

The confrontation appears to have tapped a vein of indignation against the “greed economy” and its glaring inequalities, bringing the workers broad public support.

Strikes are rare in Hong Kong, and strikes that gain this much solidarity are unprecedented in recent memory. The dockworkers represent a new level of action among the fastest growing segment of workers: subcontracted, not yet unionized, hyper-exploited.

Fifteen days into the strike, union spokespeople say not more than 20 dockers have returned to work while 120,000 containers sit untouched, ships experience delays of up to 60 hours, and daily losses of half a million U.S. dollars mount.

On the other side of the fulcrum, thousands of Hong Kong citizens have rallied to “occupy” the Kwai Tsing Port, bringing vast quantities of food, water, and funds ($800,000 so far) to ease the strain on strikers.

The dockers are holding firm in their demand for recognition of their newly formed Hong Kong Dockworkers Union, humane working hours, safety measures, and wage hikes of 15-20 percent. Under immense public pressure, Hong Kong’s pro-business government has had to intervene to make management negotiate.

A court injunction initially limiting strikers’ access to the docks was later amended, providing the right for 80 to picket at a time. But the sustained presence of hundreds of strikers and supporters camping out on surrounding streets has disrupted all normal flow of work, and a sympathy “sick-out” earlier in the week by port truck drivers reinforced the strike.

Meanwhile an activist student group, Left 21, has begun organizing a boycott of Li Kai-shing’s mega-supermarket chain Park and Shop, and the president of the International Federation of Transport Workers, the global organization of transport unions, traveled to Hong Kong for a solidarity event. The AFL-CIO’s Solidarity Center is donating $5,000.

While support floods in from students, other unionists, and citizens, buoying up the strikers, the solid commitment of the dockworkers themselves is driving this piece of history. The workers organized despite differences in craft and employer (at least four major contractors supply staffing to the Kwai Tsing Port), divisions between subcontracted workers and permanent port employees, lack of formal recognition of their union, and no precedent of collective bargaining.

The dockers have no illusions about the concentrated wealth and power of their ultimate boss Li Ka-shing, but they realize that they have in their hands something no one else controls: the ability to withhold their labor.

Repercussions on the Mainland

The colonial history of Hong Kong left little in the way of labor rights, and unions are rather weak, operating with limited legal rights to bargain or represent workers. Still, both of Hong Kong’s two major union federations are playing roles in this strike.

The larger, the HKFTU, has ties to mainland China’s official labor federation, the ACFTU, and is considered pro-business and politically conservative. In this strike its lack of legitimacy among workers was further weakened by revelations that one of its leaders holds a management position in Global Stevedoring Service, one of the contractors that employ dockworkers.

HKFTU tried to funnel management’s offer of a 5 percent wage increase to a subgroup of workers, but was shamed and now seems to have retreated entirely.

The smaller federation, the HKCTU, is considered a pillar in the pro-democracy movement in Hong Kong, and has taken the lead in supporting the strike: raising funds, organizing logistics, doing PR and outreach, making demands on politicians.

The conflicts between the two Hong Kong labor federations point to implications of this strike for mainland China. Though total reintegration of Hong Kong into China is still 35 years in the future, the two economies are already thoroughly enmeshed. Because of the strike, some portion of Hong Kong ship traffic will almost certainly be re-routed to the southern mainland ports at Shenzhen or Guangzhou, where labor conditions are way below those in Hong Kong.

A strike of crane operators at the Shenzhen port several years ago was met with swift government intervention and rapid agreement to workers’ demands, in an incident believed to show the government’s determination to prevent a spread of worker militancy—not through repression but through accommodation.

Given that there are already tens of thousands of wildcat strikes annually on the mainland, rising on 30 years of wage repression and an absence of union representation, the potential for this spark of Hong Kong labor militancy to jump the straits and ignite a prairie fire on the mainland may be on the minds of China’s leaders.

Ellen David Friedman is a retired union organizer, on the Policy Committee of Labor Notes, and a Visiting Scholar at Sun Yat-sen University in Guangzhou. Support the strike fund here.

Great story about an important struggle, especially now that the ACFTU has inserted itself into the negotiations, but you missed a chance to have your readers participate directly in the solidarity action that the union and the global union fedewration it is affiliated-to are running with LabourStart. In just a few second you can send a solidaity message to the strikers here:

Whose office can we take over in support? Where can we send donations?