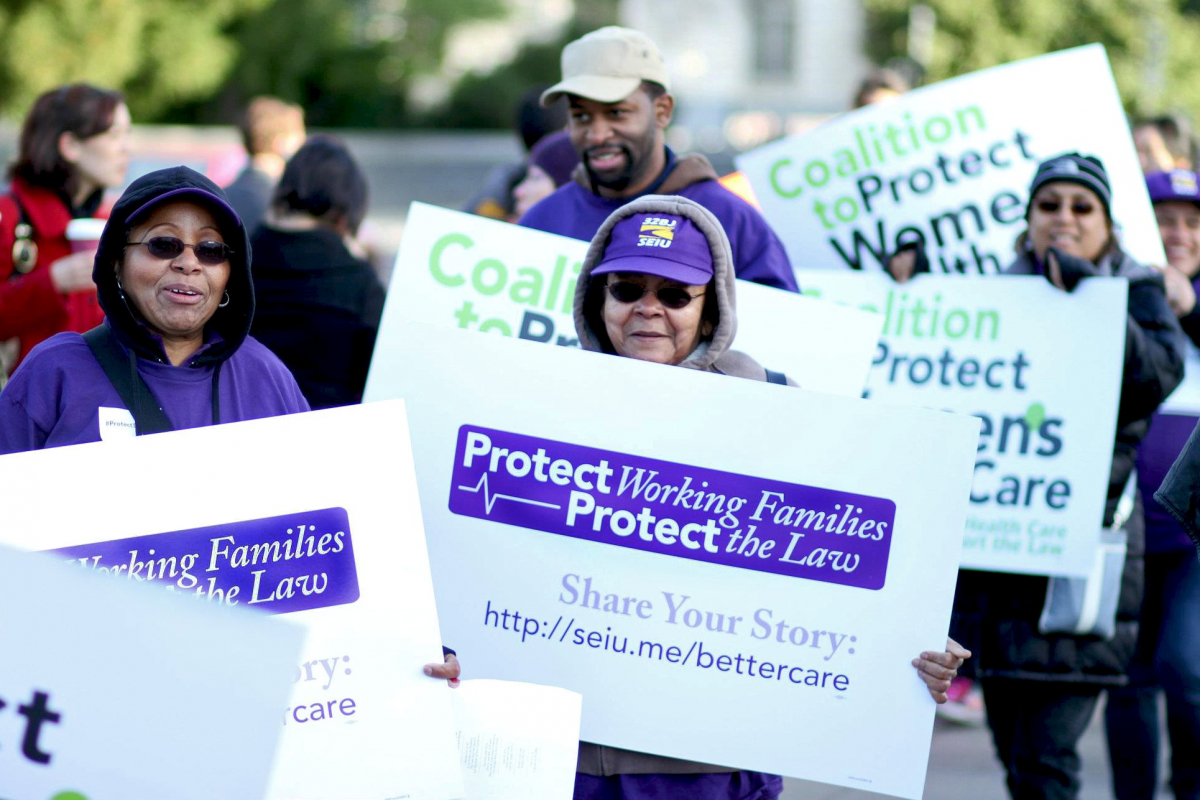 Members of Service Employees 32BJ demonstrated for Obamacare outside the Supreme Court—but now it looks like the health care law will harm multiemployer benefit funds like theirs. Photo: David Sachs, SEIU International.

At a January meeting of the Labor Campaign for Single Payer, a French unionist used these words to describe how health care works in France. But you don’t have to travel to France to see the principle in action. It’s at work right here within the U.S. labor movement.

That model is “multiemployer health care plans,” bargained by unions and jointly administered with employers, that provide continuous coverage even for part-time and seasonal workers through periods of unemployment (see box below).

The new “exchanges” are the centerpiece of the Affordable Care Act. They will open for business January 1, 2014. Ideally they will offer one-stop shopping for people and small employers who want to buy health insurance.

An individual or small business can go to the exchange website in their state, or in some cases a storefront, and determine eligibility for Medicaid or for subsidies to buy insurance, and then compare plans.

Subsidies are available for individuals earning up to 400 percent of poverty, but only if the plan is purchased on the exchange.

Yet what should have been a model for health care reform now faces an uncertain future. Because the Affordable Care Act (ACA) tilts the playing field to disadvantage multiemployer plans, this decades-old gain of the labor movement may be irreparably damaged.

FUNDS HAVE BEEN GENEROUS

In a health care market that thrives on exclusion, multiemployer funds cover members and families not just while they are working intermittently but through periods of unemployment and even during retirement. They provide the same coverage for everyone, regardless of age, family status, or health status.

This means that to the employer, they cost more, per member, than traditional single-employer plans. The increased cost puts member employers, 90 percent of them small, at a competitive disadvantage.

As health care costs have become unsustainable, so has the funds’ generosity—and their ability to subsidize periods of low employment. Unions hoped that the ACA, with its requirement that more employers provide health insurance, would level the playing field by bringing more small employers into the system.

Instead the ACA appears to disadvantage multiemployer funds by permitting competitor employers access to the new health care exchanges while denying the funds the same access. The result is that employers will have every incentive to get out of the funds when union contracts expire.

As it is now, Jim’s (unionized) Plumbing Shop pays into a fund per hour for all his employees, full- and part-time. But Jim competes against Joe’s non-union Plumbing Shop. Joe probably covers only his full-time permanent workers, with a traditional insurance plan.

In the new exchange world, Joe will be eligible for tax credits to make it easier for him to cover his employees. He will have access to a more stable insurance market through the exchange that will likely lower his costs. Or he may decide to stop offering coverage and just give his employees money to buy coverage on the exchange.

HOW DO TAFT-HARTLEY PLANS WORK?

Multiemployer health care plans, sometimes called Taft-Hartley plans, are benefit funds administered by a joint board representing both union and management. Employers, usually small ones, in the same industry and geographic location pool their health care contributions to create a single fund.

Such funds are found in industries with temporary or seasonal employment: construction, theater, longshore, transportation, hotel workers, food service workers. Whereas the Auto Workers or Steelworkers will negotiate that an employer provides benefits itself, the Ironworkers, UNITE HERE, or Teamsters often negotiate for bargaining units to participate in multiemployer funds.

The advantage for workers is obvious. They maintain continuous coverage as they work for multiple employers in an industry, and even during periods of unemployment. Eligibility is determined by the fund, not by the employer.

The funds have found innovative ways to provide health care for low-income and part-time employees. For example, hotel workers in Las Vegas and Atlantic City have established primary care clinics. Thus these funds become useful in organizing efforts, since the chance to belong to the fund is a persuasive attraction for potential members.

There is also an advantage to the employer, who can tap into a skilled labor pool that has access to health care. Employers can hire a stagehand or a steamfitter for a weekend, a week, or a year. The employers’ only obligation is to write a check. They do not have to deal with insurance carriers or handling insurance complaints from their employees.

For the employer, participating in a multiemployer fund is like a defined-contribution plan. He pays a certain amount per hour worked into the fund. In the construction industry, for example, the rate may be more than $10 per hour.

A fund may set a rule such as “150 hours per month are needed for eligibility.” The hours worked may come from one employer or from many. Funds sometimes have “hour banks” that let workers accumulate hours one month and use them later.

Thus the “steady Eddies”—those who work year-round—subsidize the costs for those who can only get work intermittently.

Jim will not have access to any of these options—unless he manages to defeat the union and opt out of the plan altogether.

Even employers of 50 or more, who are subject to the “free rider” penalty if they don’t offer insurance, can come out ahead. The lobbying group for multi-employer plans offers this example: A family at 200 percent of poverty purchases a $10,000 plan on the exchange. With subsidy, that coverage would cost only $2,778.

The employer could give the employee the $2,778, throw in say $600 for the worker’s increased taxes, pay the $2,000 penalty—and still save almost half.

Many experts argue that the exchanges will encourage employers in general, especially in low-wage industries, to abandon coverage. Where Obamacare was first tried, in Massachusetts (where it was called Romneycare), employers did not drop their insurance in big numbers. But Massachusetts does not offer the level of subsidies that the ACA does.

Several national unions are working with the administration to see if multiemployer plans could be allowed to use the subsidies. But so far the administration has not been very open to such fixes, which would be complicated in any case.

If multiemployer plans are decimated by the ACA, it will be doubly a tragedy, because these plans offer a model for health care reform that already addresses many of the issues the ACA was supposed to address. They offer small employers coverage with minimal overhead. They do not exclude people by using their medical information to evaluate them. And they address one of the recognized problems with the ACA—“churn.”

“Churn” is how health policy wonks describe people who will move between Medicaid, subsidies on the exchange, and coverage from a job. At each of those stops, the patient/employee experiences different benefit designs, provider networks, reimbursement levels, and cost sharing. Plus an application process, and more delays.

As the policy wonks fret, the model was there all the time. Follow the example of the multiemployer plans.

The regulations to implement the ACA are not yet settled. But it’s clear: failure to level the playing field could cause employers to stop participating and many plans to go under.

It’s not surprising that policymakers ignored the model of the multiemployer plan. The ACA was designed by insurance executives, who only understand a model where insurance is paid for in full, one month at a time, by a single individual, family, or business.

The other reason the multiemployer plan escaped the comprehension of policymakers is the logical extension of the model. If you expanded the concept to a national or regional level, you would have to replace the current, sometimes cumbersome, eligibility rules with universal eligibility. Then it would look like—France.

James McGee is executive director of the Transit Employees Health & Welfare Fund, which provides benefits to workers in the Metro system in Washington, D.C. He is also a member of Plumbers Local 520. Twitter @Jimmy1920.