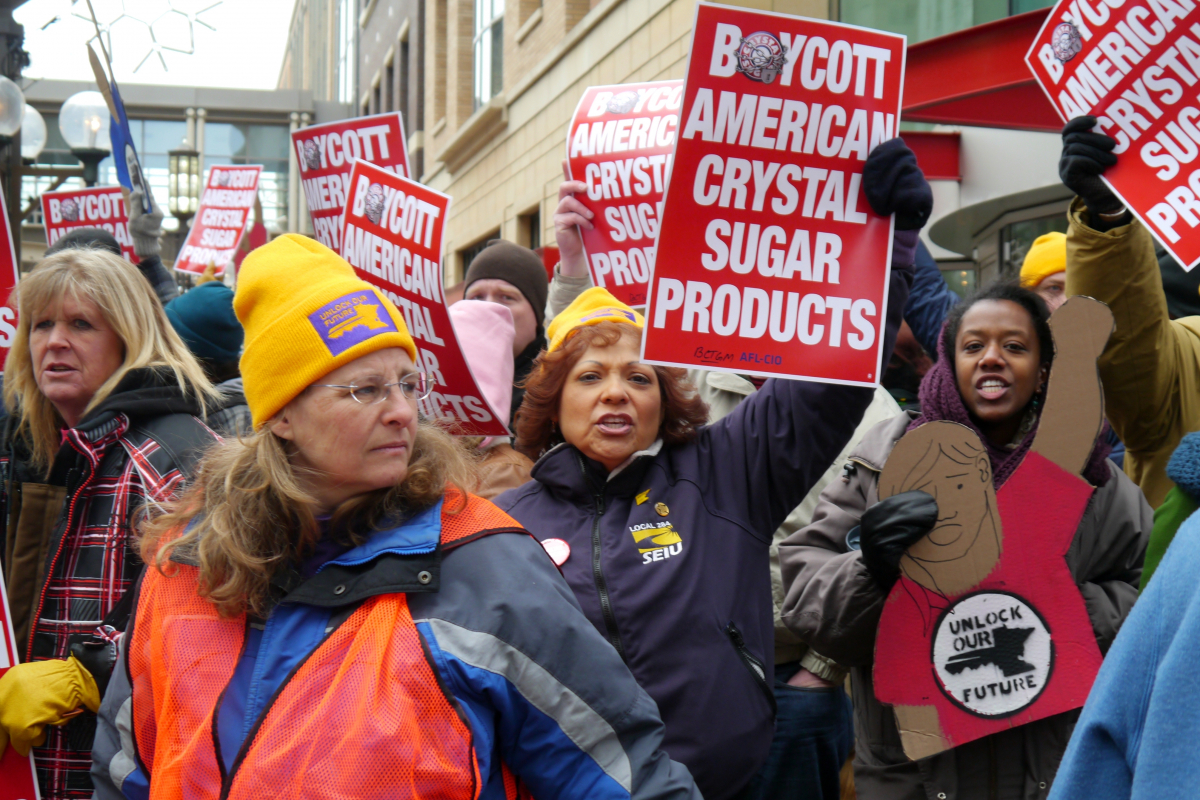 It was midnight, and contract negotiations for 4,000 Twin Cities janitors had stretched on all day.

When the two sides broke to caucus, bargaining committee members picked up their cell phones to call members just finishing their shifts. Soon, dozens of union members and supporters showed up. One brought a guitar and started playing.

“Some of the Somali women on our committee were dancing. It looked like a festival,” recalls Service Employees (SEIU) Local 26 President Javier Morillo.

“The employers came out at 3 a.m. and there were 150 people in the room. They were shocked. It was an impressive show of force.”

“Our members won the best contract [for janitors] that anyone in SEIU won in the last year,” Morillo said.

BUT THAT’S NOT ALL

Such deals could have been the highlights of the much-touted “Week of Action” February 25-March 2, involving unions, community groups, faith organizations, students, and others—except there was more. Retail cleaners at Target stores, who have no union, also walked off the job for 24 hours.

The workers, many of them Latinos who earn minimum wage, overcame their fear of being fired to protest how Target pits cleaning companies against each other to drive down compensation. The corporation is headquartered in Minneapolis and a major player in Minnesota’s economy.

It was the first time any Target workers had gone on strike. The workers are officially employed by cleaning contractors, but have continually pushed Target to improve their conditions.

“The power of that [walkout] in the Latino immigrant community is enormous,” Morillo said. Seventy-five percent of Local 26’s janitors are Latino and another 15 percent are immigrants from East African nations.

“In the last four years, Local 26 has lost 1,500 members to [immigration enforcement] audits, including half of our executive board and 90 percent of our stewards,” Morillo said. “It’s been a difficult rebuilding process.” Some current and former Local 26 members now work in retail.

The walkout illustrated how to take collective action outside of traditional unions, said Morillo. "We have to think of new ways of organizing ourselves according to how the economy is structured."

A WEEK OF ALIGNED ACTIONS

The idea of the Week of Action, which united dozens of unions and community organizations, was to put a spotlight on some of the Twin Cities’ most important employers—all of which are at odds with both employees and community members over a host of issues, from wages to hiring discrimination to home foreclosures.

Minnesotans for a Fair Economy, a coalition initiated by SEIU in early 2011, hosted another rally at Target headquarters later in the week, to demand the company boycott American Crystal Sugar, which produces Target’s Market Pantry brand of table sugar. American Crystal locked out 1,300 union members in Minnesota, North Dakota, and Iowa 20 months ago.

Target was one focus of the week, for its labor practices, spearheaded by CTUL, the worker center that’s organizing the cleaners. The others were Wells Fargo and US Bank, for their callous foreclosures on homeowners.

These corporations own many of the buildings that the janitors and security officers clean and protect, control the money for home mortgages and economic development, and set the tone for hiring in the city. The Week of Action—especially the Target walkout—generated local and national media coverage and a lot of buzz among activists.

The actions put a spotlight on “where the power is” and helped Local 26 win its contracts, Morillo said.

That sense of empowerment extended throughout the week as Local 26 members joined in events organized by community groups, students marched with workers, and people of all backgrounds stood on the steps of the state Capitol.

Led by members of Occupy Homes, hundreds gathered at a Minneapolis house foreclosed on by Wells Fargo. They included 30 Local 26 security officers, one of whom told the crowd his own story of being homeless.

The group marched to a nearby Wells Fargo branch, then occupied a Minneapolis bridge during rush hour, demanding the banks stop foreclosures. Thirteen people were arrested, including two SEIU security officers.

The workers’ involvement captured the spirit of the week, said Greg Nammacher, secretary-treasurer of Local 26. “They do get the connections,” he said.

The same day as the bridge occupation, students at Macalester College in St. Paul walked out of class and marched to Wells Fargo to close their personal accounts and demand the college withdraw its funds. And members of ISAIAH, a coalition of 100 faith congregations, gathered at the Capitol to pressure lawmakers to pass a “Homeowner’s Bill of Rights.”

Meanwhile, Minnesotans for a Fair Economy released a report showing the devastating impact of the foreclosure crisis on families and communities.

“It’s been a really powerful thing for students to be involved and see how all our targets are the same,” said Rebecca Hornstein, a Macalester senior. One of the best parts of the action, she said, was that students met and talked with the union security officers on campus.

“Our members have been able to directly engage with members of other organizations, particularly the SEIU locals,” said ISAIAH Executive Director Doran Schrantz.

“We’re able to move things further and faster because there is this ground level of trust,” Schrantz said. “That’s one of the lessons for us from this experience… long-term movement building.”

ISAIAH’s effort at the Capitol built on more than a year of bank protests. When it was time to lobby, ISAIAH members struck a militant tone that was clearly uncomfortable for some lawmakers and bank lobbyists.

When the committee that was to hear the Homeowner’s Bill of Rights ended its meeting without taking up the legislation, ISAIAH members demanded and won a hearing later that day.

CTUL and SEIU will also draw on that militancy in coming weeks as they seek legislative action.

Two days after the Target walkout, lawmakers standing with CTUL members introduced legislation that would hold Target and other retail chains that contract out their cleaning accountable when cleaning companies violate safety and wage-and-hour laws.

Barb Kucera edits workdayminnesota.org, a website of worker news and resources based in Minneapolis.

A version of this article appeared in Labor Notes #409. Don't miss an issue, subscribe today.
Related
Striking Window Cleaners Want Their Dangerous Job Recognized as a Skilled Trade »
TV Review: The Class Struggle at Superstore »
The National Guard Came to St. Paul to Repress Protests. We Kicked Them Out of Labor’s Hall. »
Global Cleaning Workers Share Their Struggles as the First Line of Pandemic Defense »
Keep the Cops Out of Our Shop, Seattle Bookstore Workers Propose »