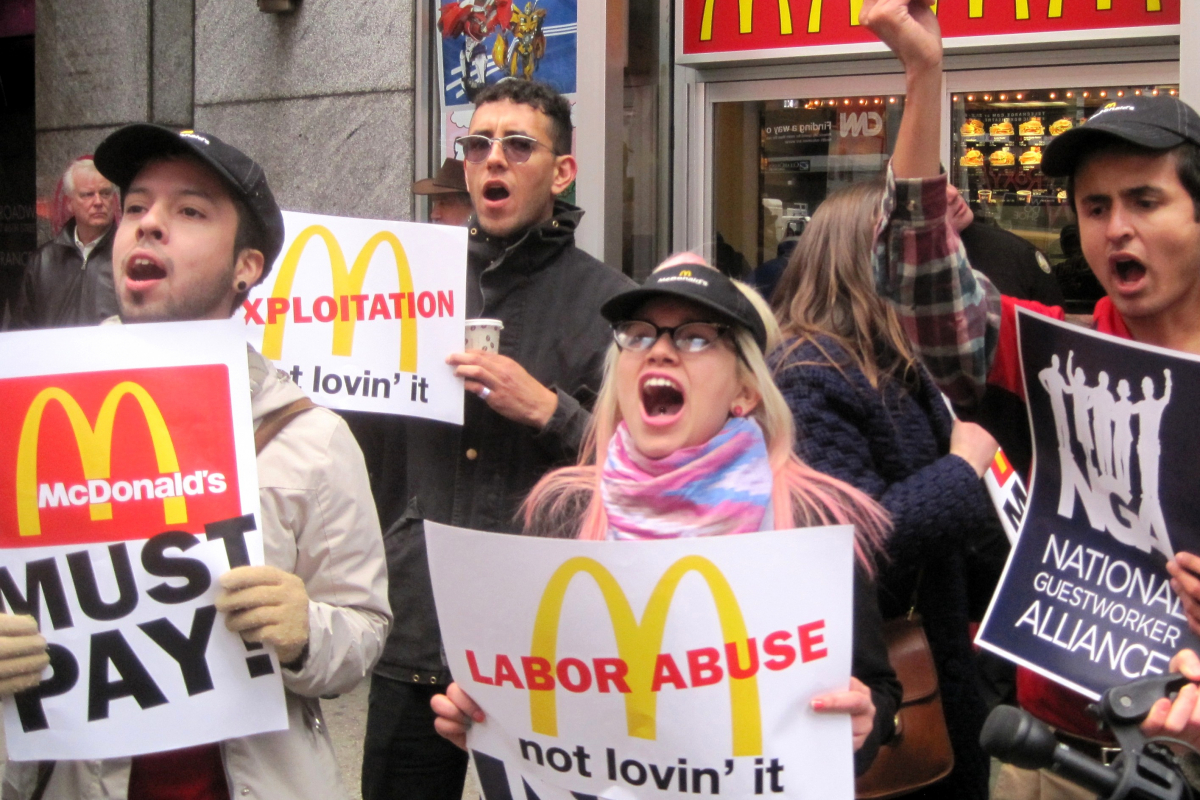 Student guestworkers protested outside McDonald's in New York's Times Square on Thursday. They're pushing the company to pay guestworkers and U.S. workers for overtime and give them enough hours to survive. Photo: Jenny Brown.

Foreign students on cultural exchange visas walked off the job again March 6, this time from three McDonald’s restaurants near Harrisburg, Pennsylvania. They were protesting shifts of up to 25 hours, wage theft, and overpriced, miserable housing.

The abuse throws a spotlight on guestworker programs just as Congress is considering an expansion of the guestworker system as part of an immigration overhaul. The National Guestworker Alliance, which helped the students organize, is pushing for legislation that would give guestworkers more labor rights.

Sixteen McDonald’s workers at three stores decided to strike after they learned about an earlier walkout by 300 student guestworkers who, like themselves, came to the U.S. on four-month J-1 cultural exchange visas.

In August 2011, student guestworkers from China, Turkey, Ukraine, and elsewhere walked out of a Hershey’s packing plant in Palmyra, Pennsylvania. Community leaders sat in to support the workers and the protests gained much media coverage.

The McDonald’s workers had similar complaints—either a drought of work, so they barely made enough to survive, or endless shifts, as long as 25 hours, for which they got no overtime pay. If they complained, they were threatened with deportation. The students were also expected to be available any time, with virtually no notice.

“We paid $3,000-$4,000 to come here,” said Jorge Rios, an Argentinian majoring in social communications. He said he signed a contract with GeoVisions, the firm that recruited the McDonald's workers, that said he would get 40 hours of work a week and the possibility of more, at Pennsylvania’s minimum wage, housing, and free transport to work.

“In reality,” he said, “we were kept in basements, working 25 hours a week, and we couldn’t do anything else because we were expected to be on call all the time.”

Alicia Marin, an industrial design major from Paraguay, said she realized she had to act when one day she worked standing up 15 hours straight and supervisors wouldn’t let her take a water break. She said, “I thought, this is not my life, my real life.”

American co-workers heard the students’ complaints, said Rios, but said, “How do you think we feel? We have to take care of our families, pay our mortgages, and you come and take our hours.” U.S. workers were also not being paid the overtime premium, the students said.

In a protest outside a McDonald’s in New York City on March 14, the students also demanded justice for their U.S. co-workers, saying they should get access to full-time work. “Americans and guestworkers, our struggle is the same,” they chanted.

The J-1 program was originally created during the Cold War to advertise the wonders of the American system to foreign students. Judging from students’ recent experiences, the program has now become a cautionary tale.

Rios said he hadn’t heard about workers’ rights struggles in the U.S. before this. “It’s an aspect of American culture that is not really talked about on the outside—and apparently not even here,” he said.

The J-1 program has grown huge because there is no limit on the number of visas that can be issued, while other guestworker visas are capped. Employers need not even go through the motions of proving that no American workers are available for the jobs.

Guestworkers under the H-2A (agricultural) and H-2B (nonagricultural) programs account for around 105,000 workers every year, while the J-1 program brings 130,000 students into low-wage jobs for three-month stints, followed by a month to explore the U.S. (Another 200,000 J-1 visas are issued to year-long trainees and interns.)

However, striking students have said that after three months of minimum wages, wage theft, and inflated rents, they are too broke to travel. The McDonald’s students are demanding they be paid the wages they were owed, including overtime pay that was stolen, and a refund from GeoVisions of their initial $3,000 payments. They also want GeoVisions banned from the J-1 program.

Recruitment firms enlist the students with flashy ads and internationalist rhetoric. The website for GeoVisions talks about “greater cooperation and understanding among nations and peoples of the world.”

Extensive press coverage of the abuses that led to the Hershey’s strike made a mockery of the idea of cultural exchange—one newspaper called the program “sweatshop diplomacy.” In response, the State Department changed its policy to require that the recruitment agencies check in with students every month.

That didn’t work, the McDonald’s strikers said, because when they complained, the agency contacted their boss instead of them.

Fernando Acosta, a marketing major from Paraguay, said the students first complained to GeoVisions in January. Rios then sent the same complaint letter to the State Department, his embassy, GeoVisions, and the National Guestworker Alliance. Only the Alliance responded.

GeoVisions instead wrote to their boss, Andy Cheung, who owns seven McDonald’s franchises in the area. Then a GeoVisions executive showed up, the students said, but he seemed to be scared of making Cheung mad.

“They care about making money, not providing a nice cultural exchange,” said Rios.

After press coverage of the students’ protests—and presumably pressure from McDonald’s brand-conscious corporate headquarters—Cheung has said he will sell his stores.

Cheung and his son also owned some of the housing the students lived in. Like the Hershey’s workers, they were overcharged and overcrowded. In one case, four men and four women shared a basement with only a curtain for privacy.

Acosta, who lived in a house with several others, said that managers told them to keep the lights out in case police came by, because the crowding violated the law. “Managers know this situation is completely illegal,” he said. Rent for such quarters was around $2,000 a month.

“None of us told our families that we were living under these conditions,” said Rios. “That’s a sign something was wrong.”

Alexandra Bradbury contributed to this story.