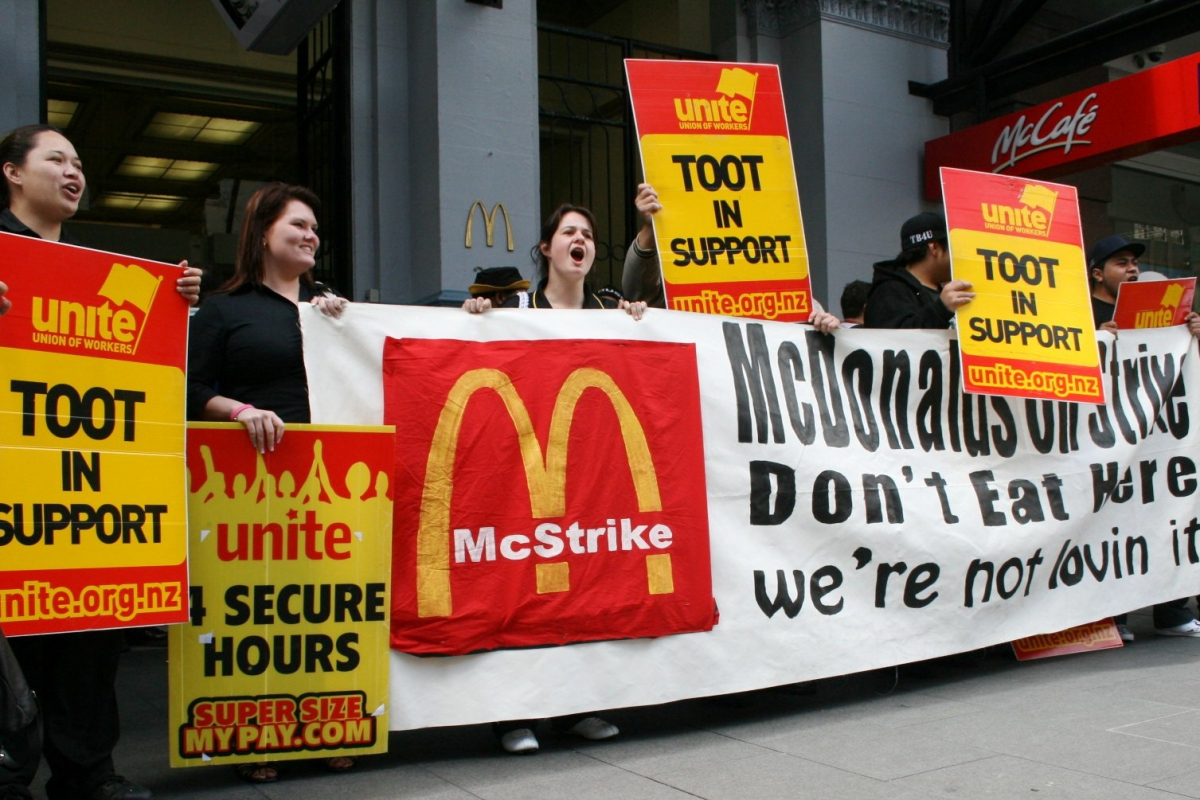 A small, spunky union in New Zealand has become one of the most successful fast food organizing efforts in the world, with more than 4,000 members at KFC, Pizza Hut, McDonald’s, Starbucks, Burger King, and Wendy’s. Photo: Unite.

Recent strikes at Walmart and fast food restaurants in New York City have opened new horizons for unions in the United States. The two campaigns are navigating mostly uncharted waters by steering clear of the National Labor Relations Board election procedure and striking without a demand for recognition. As the headlines fade, many of us are wondering—what’s next?

Going public with a dramatic action is one thing. Building a durable organization of workers in the notoriously inhospitable low-wage service sector is another. But a small, spunky union in New Zealand offers an example of what a lasting union in fast food can look like.

The independent union Unite (no relation to UNITE HERE) launched its “Super Size My Pay” campaign in 2005. Now with more than 4,000 members at KFC, Pizza Hut, McDonald’s, Starbucks, Burger King, and Wendy’s, it has become one of the most successful fast food organizing efforts in the world.

Unite developed an organizing model that took advantage of two features of New Zealand labor law: As in Europe, employers are legally required to negotiate with a union that represents even just a handful of its workers. And in 2003 a Labour Party government passed a law requiring employers to allow union organizers access to non-union shops to meet with workers.

Unite’s strategy? Go into fast food restaurants, call workers off the shop floor one by one for short meetings, and make a membership pitch.

After trying out this approach successfully at a local movie chain, Unite launched a campaign in Auckland, New Zealand’s largest city. The first target was Restaurant Brands, which operates KFC, Pizza Hut, and Starbucks in New Zealand; later the campaign expanded to McDonald’s, Wendy’s, and Burger King.

Organizers talked to workers about a few basic demands: increasing the minimum wage from NZ $9.50 per hour to $12 (US $7.60 to $10), the abolition of “youth rates” (a legally permitted pay grade 20 percent below the minimum wage), and “secure” hours.

“We had guaranteed union access, so we would get people rotated out to come and see us, and we would talk to them about joining the union,” said former Unite organizer Simon Oosterman. “I’d say that, naturally, about 20 percent of the workers join, even if there’s a bit of negativity in the workforce.”

Despite the massive influx of members, though, only a small number of workers were involved in meetings outside the shops to plan out the next steps of the campaign. Most decisions were made by Unite officers and organizers.

With this base of support, Unite opened the campaign’s second phase: quickie strikes to pressure Restaurant Brands to sign a collective agreement granting the demands of Super Size My Pay.

Under New Zealand law, a collective agreement establishes wages and working conditions only for those workers who are union members. Most employers then extend the gains to non-members, in an effort to undermine the union.

The first target was Starbucks. After a period of planning with the workers, Unite organizers went from café to café in a union bus on one day in November 2005, calling baristas out on strike and converging on the most high-profile, pro-union Starbucks in Auckland. Around 30 Starbucks workers from a dozen shops participated.

This kicked off a wave of similar strikes in the other chains over the next few months. Hundreds of workers took part in short strike actions. Phone zaps—hundreds of union supporters jamming the phone lines of a company with calls—shut down Pizza Hut’s call center, knocking out the chain’s delivery orders.

“We threw everything at these companies and I wondered if we had anything left to throw,” Unite officer Mike Treen said. “And then came the high school students’ strike.”

Since young people made up both the primary workforce and a large consumer base for the fast food chains, Unite formed a coalition with a grassroots activist group called Radical Youth to campaign against the hated youth rates.

Radical Youth organized more than 1,000 Auckland students from a dozen high schools to walk out in support of the union’s demands, taking union-provided buses to Queen Street, Auckland’s main shopping boulevard. Dozens of young people sat down in intersections, blocking traffic, while others swarmed fast food restaurants up and down the street, chanting “NO YOUTH RATES!”

It’s impossible to say exactly which straw broke the camel’s back, but within days of the action, Restaurant Brands offered to sign a collective agreement. The agreement granted pay increases to nearly NZ $12 an hour over two years, increased pay for those making the youth rate to 90 percent of the minimum wage, as a step toward phasing it out, and stabilized workers’ schedules.

The offer went a long way toward meeting Unite’s demands, and union officers decided to accept it. According to some Unite organizers, only a few rank-and-filers were consulted, and only via text message, but the agreement was signed.

Since 2005, more than 30,000 workers have been members of Unite—due largely to high turnover rates in fast food and the other precarious sectors Unite has expanded into. Many ex-members go on to join other unions at their next jobs. By organizing the mostly young fast food workforce, Unite has created a gateway to the labor movement for an entire generation of workers.

Just as important, Unite has worked to extend its victories beyond the walls of unionized shops and turned its demands against individual employers into a society-wide campaign for better pay for all workers. Over seven months in 2009-10, Unite activists gathered more than 200,000 signatures to support a national referendum on a NZ $15/hour minimum wage. They fell short of the 300,000 necessary, but succeeded in pushing all the opposition parties to endorse the demand.

The national dialogue generated by Super Size My Pay forced the Labour Party and other opposition forces to either put up or shut up about fighting for workers. In 2008, the Labour government finally voted to abolish youth rates.

The current right-wing government, however, plans to sign sub-minimum youth rates back into law April 1. If this happens, Unite members will be protected by their contracts.

But maintaining the union in the shops is an uphill battle. Unite’s corps of nine paid organizers makes the rounds to shops every week, pulling workers off the floor to make a membership pitch in much the same way they did at the start of the campaign. Membership hovers around an average of 30 percent across the chains, with some shops stronger than others.

Rank-and-file involvement is low, with most of the union’s work done by staff. Unite has had difficulty maintaining a network of delegates (stewards) active in the shops. To increase membership and involvement, Unite has tried a number of schemes—Facebook groups, neighborhood-based delegate councils, awarding a $10 prize for each member a delegate signs up, giving members coupon books, and most recently, a holiday gift card and a trip to an amusement park—but the problem of low union density in the chains remains.

Lessons for the U.S.

Criticisms aside, Unite’s accomplishments are impressive—a nearly 50 percent increase in wages in the chains since 2005, abolition of youth rates at the chains, shifting the national political dialogue on low-wage work, and perhaps most important, making unions relevant to a new generation of workers.

We can’t simply copy and paste Super Size My Pay into a North American context. Employers are much more aggressively anti-union in the U.S., and our legal framework for collective bargaining is much weaker. And Labor Notes readers will agree that rank-and-filers must sit in the driver’s seats of their unions.

However, we could build on elements of Unite’s model, extending organizing from the shop to the community, as Unite did by bringing students into their coalition, and by adopting society-wide demands for all workers, not just those covered by a contract.

And, like the high schoolers who stormed Queen Street, unions must be willing to take disruptive actions that put real economic pressure on employers and cause political crises for elites.

Erik Forman has been active in the Industrial Workers of the World since 2005, working and organizing at Starbucks and Jimmy John’s. He is currently compiling a report on union strategies for organizing the food service and retail sectors as a Practitioner Fellow at the Kalmanovitz Initiative for Labor and the Working Poor at Georgetown University, to be released this spring. Follow him at twitter.com/_erikforman.