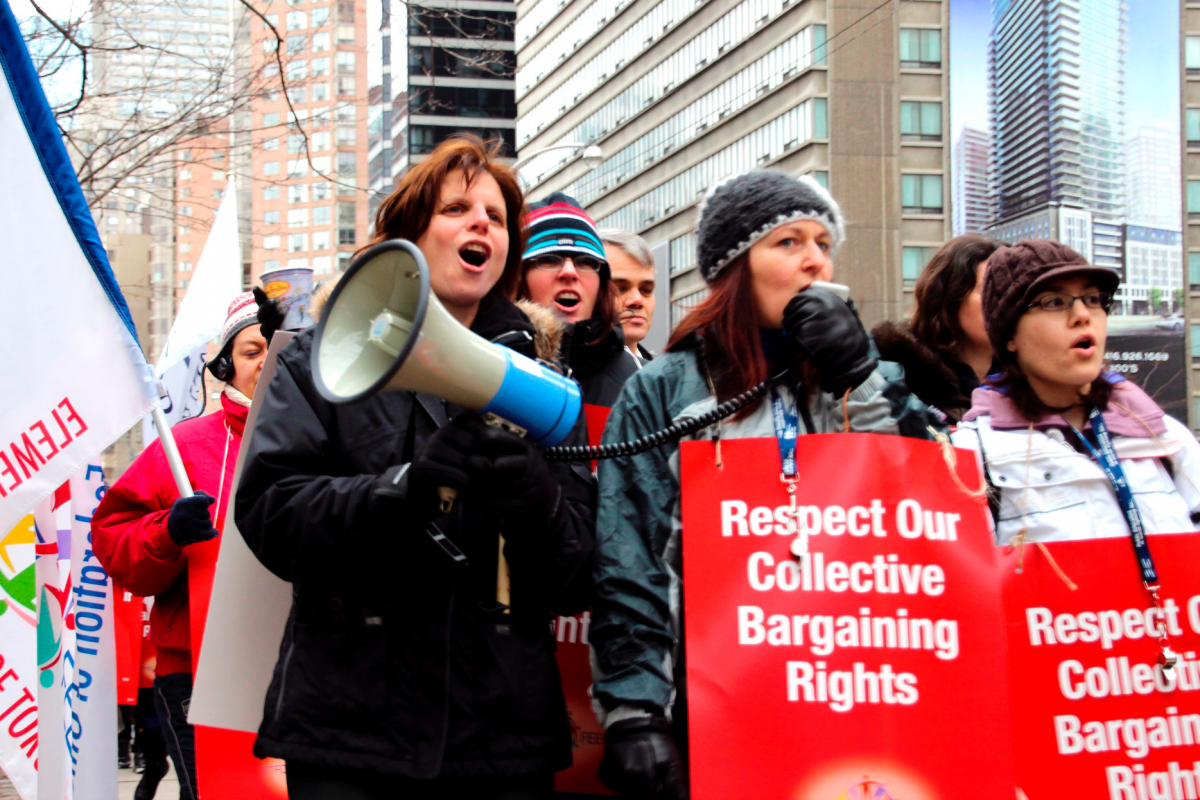 Ontario elementary teachers staged a one-day strike December 18 to protest a law that crushed their bargaining rights. The Conservative Party is threatening "right to work" province-wide if the party comes to power this summer. Photo: Elementary Teachers of Toronto.

When Michigan Governor Rick Snyder signed right-to-work bills into law last month, he gladdened the hearts of anti-union politicians next door in Ontario. Could our province, a union stronghold, be next?

The more unions are beaten back in the United States, the worse it is for Canadian workers, whose jobs can easily be shipped south. One need only look at Caterpillar’s Electro-Motive Diesel jobs being moved from London, Ontario, down to Indiana in 2012, after that state passed right-to-work legislation. Such laws outlaw contracts that require all those represented by a union to pay dues, thus breaking up solidarity.

Just last month, GM announced it would be moving jobs from Oshawa, Ontario, to Michigan—coincidentally, just after Michigan’s right-to-work law was passed.

An opening is forming for right-to-work in Ontario. The Liberal provincial government is in disarray, after the premier resigned this past fall. Current polling puts the Conservatives first, followed closely by the union-backed New Democratic Party (NDP). It is quite possible that a new election could occur this summer and that the Conservatives could be forming the next government of Ontario.

Tim Hudak, the Conservative provincial leader, has openly called for right-to-work laws, supposedly to help solve the provincial deficit. But the Liberals are already moving on a similar track. The current provincial Liberal government passed the draconian Bill 115 this past fall, which hinders teachers’ collective bargaining rights by mandating wage freezes, banning strikes, and giving the government the power to impose contracts.

The Liberals also tried to pass another bill that would have curbed most Ontario public sector workers’ collective bargaining rights by imposing wage freezes and giving the government a final say over all contracts. They were unable to move that bill through the legislature because it wasn’t harsh enough for the Conservatives.

However, before we get too doom and gloom—Canada is not the United States. We have a different array of social forces and conditions that would make right-to-work-type legislation much harder to pass.

First is the existence of the NDP at provincial and federal level. The NDP has been drifting steadily rightward for a number of years, but its political base is still largely working class. Without the NDP as a counterforce, the Liberals and the Conservatives would surely pull the political agenda farther right than they have so far achieved.

The second point is Canada’s much higher rate of unionization. Union density is around 30 percent, compared to less than 12 percent in the United States. In the private sector, the numbers fall to 15 percent in Canada and less than 7 percent in the U.S. Even states with high union density such as Michigan, at about 18 percent, are significantly less unionized than Ontario, at 27 percent. Unions in Canada have relatively more members, more money, and more political clout.

The third reason is that the union movement has entrenched social gains that make a direct attack harder to win. The right-wing populist line of smaller government mixed with an Ayn Randesque individual entrepreneurial spirit does not have the same reach in Canada. Big government is not hated in the same way. Social programs and services such as universal health care are popular (though their popularity can’t ensure their safety from cuts). Right-wing populism does have a base in Canada, but it is narrower than in the U.S.

This explains why the current Conservative federal government, even with a majority, has a back-door strategy of cuts and confrontations. Yes, the Conservatives have a far-right agenda, and have subjected many striking unions to back-to-work legislation, but the government is pursuing its agenda with a concerted political calculation, trying to avoid attacking unions head on.

The pending Bill 377, passed last month by the House, seeks to force unions to publicly open their finances, but that still is only nibbling around the edges.

Teachers on the Front Lines

The education workers’ fight could potentially be a rehearsal for a larger battle over right-to-work. The union movement needs to impose a high political cost on the Liberals for Bill 115. The Ontario Federation of Labour is demonstrating “for rights and democracy” at the Liberals’ Ontario convention January 26, denouncing both Bill 115 and the Liberals’ austerity budget.

If the labor movement is to stem the anti-labor tide in Ontario and in Canada, it needs to dispense with public messages based around “labor rights” and focus the debate on conditions for all workers. Right-to-work laws are not about stripping rights away from unions; they are about curbing the power of workers.

The $15 billion budget deficit in Ontario is the pretext that the right will use to push for right-to-work laws. The battle is just shaping up.

David Bush is a Hamilton, Ontario, activist whose work has appeared in Canadian Dimension, Briarpatch Magazine, Common Dreams, and Rabble.ca. He belongs to Canadian Union of Public Employees Local 3906.