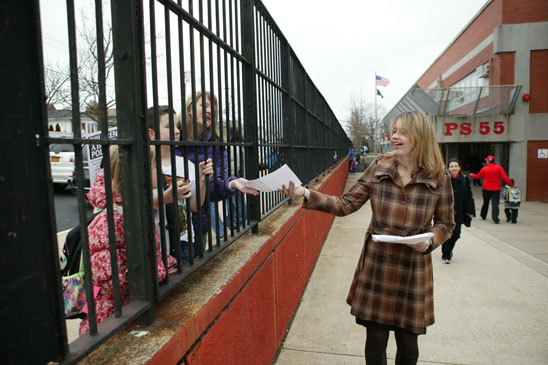 While teachers in Seattle were making headlines refusing to administer a standardized test, the New York teachers union nearly finalized a deal to drastically change how teachers are evaluated, putting an increased emphasis on standardized tests.

The evaluation deal broke down at the 11th hour of last week’s state-imposed deadline, with both sides blaming each other, but with one key sticking point: Mayor Bloomberg refused to let the agreement expire in 2015. Most other New York districts agreed to one-year deals, and UFT offered two years, but Bloomberg wanted longer.

The school district is still obligated by law to work with the teachers union to come up with an agreement together, but the money tied to last week’s deadline is gone.

Critics within the United Federation of Teachers (UFT) say the union opened the door for concessions in last year’s state-level negotiations and gave away too much for city teachers to be able to negotiate a fair deal.

“We should not be in the position we are in,” said Julie Cavanaugh, a special education teacher in Red Hook, Brooklyn, days before the deal was supposed to be finalized. “It’s not just the state has already mandated most of the agreement. It’s because the UFT has agreed up until this point.”

Cavanaugh is running for UFT president as part of the reform caucus Movement of Rank and File Educators (MORE), which criticized the UFT’s process as top-down. The caucus rejects the “value-added” model where student learning is measured through growth in a numerical assessment often gathered from standardized test scores.

Race to the Test

The UFT had a year to negotiate with the district, based on a deadline set for all New York school districts by Governor Andrew Cuomo. With $250 million in state education funds and $200 million in future federal grants on the line, the two sides waited until the year was nearly up to hash out a deal.

To qualify for federal Race to the Top funding for schools, under President Obama’s Race to the Top initiative, states had to evaluate teachers based partly on their students’ test scores. New York State and the state teachers union reached a deal last February for such a system, with New York City’s local union a key endorser of the agreement.

A minimum of 20 percent of teachers’ evaluation scores would be based on their students’ standardized tests. An additional 20 percent would rely on local district testing, to be bargained by the union and each school district. Teachers rated ineffective for two consecutive years would have a brief period to turn around their performance before facing dismissal.

But there were many unknown factors in how the state policy would be implemented locally, leaving the UFT a lot of ground to cover in negotiations. The local standardized test for New York City didn’t exist yet. And the question of how to evaluate teachers whose subjects aren’t tested in the statewide exam, such as art and music, hadn’t been resolved. Nor were the processes clearly laid out for the remaining 60 percent of teachers’ evaluations, which was supposed to be tied to classroom observation.

The agreement did lock down a few New York City-specific assurances, such as an independent arbiter to consider appeals from teachers dismissed under the new system, instead of an administrator having the final say.

MORE teacher activists and other critics say an emphasis on student performance, particularly on tests, can lead to teachers being labeled ineffective and even fired for factors outside their control: students’ home life, poverty, learning disabilities, and other external factors.

They say focusing on “teacher quality” only distracts from the measures that would really improve education: shrinking class sizes and giving teachers the resources and training they need to be successful.

This deal, in addition to weakening job security for current teachers, could pave the way for more concessions down the road—such as tying pay to evaluations, as districts and teachers have agreed to do in Newark, Baltimore, and New Haven.

In December, knowing the evaluation deadline was around the corner, the MORE caucus pushed for a membership vote on any evaluation deal, arguing that—like the overall contract—it should be subject to ratification. That idea was voted down in the delegate assembly (the union’s governing body).

In a sign that a deal was near, the union moved its scheduled delegate assembly in January up one week to convene the same day as the deadline, to facilitate a last-minute vote. UFT President Michael Mulgrew told delegates he had negotiated a fair deal for teachers despite the city’s refusal to agree on the expiration date.

Members of MORE picketed outside the delegate assembly Thursday, urging delegates to vote down any agreement that would base evaluations on standardized tests they called “junk science.”

Teachers chanted, “Money for schools and education, not for tests and corporations,” and leafleted delegates walking into the meeting.

Mayor Bloomberg—who recently compared the city’s teachers union to the National Rifle Association, weeks after the Sandy Hook massacre of teachers and students—said he blocked the entire agreement because 2015 expiration would not allow enough time to get rid of teachers deemed “ineffective” under the new system. His response reinforced concerns that the district’s goal is to get rid of large number of teachers.

MORE’s presidential candidate, Cavanaugh, said the union only made a shallow attempt to engage members in the buildup to the evaluation deadline. The UFT sent a leaflet out to teachers, asking members and allies to call 311, the city services information hotline, to express their frustrations with Bloomberg over the stalled talks. Cavanaugh called that more of a public relations move than a real effort to mobilize teachers.

Nonetheless, MORE connected the last-minute breakdown in New York to other signs of protest around the country—from teachers in Hamburg, New York, who voted down their new evaluation system, costing the district $450,000 in Race to the Top funds, to the Seattle teachers voting to boycott standardized tests, to the Chicago Teachers Union strike last summer, which was seen nationally as a repudiation of testing and privatizing trends in education.

A statement from the caucus after the failed negotiations read, “This rejection of school ‘reform’ is part and parcel of a wider nationwide backlash against what has passed as ‘improvement’ in education over the past 10 years.”

Despite the financial loss the district faces, MORE leaders hope the deal’s failure is an opportunity for union members to regroup and rethink whether they will work with the district on future test-based evaluations, or fight against them.