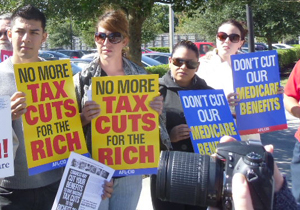 Demonstrators in Orlando last week were fine with letting the clock run out on Bush’s tax giveaway to the rich—fiscal cliff or no. Photo: Jennifer Kenny.

The high-stakes showdown known as the “fiscal cliff” is a manufactured crisis. Last year Congress gave itself an artificial deadline to either negotiate and pass spending cuts and tax increases—or see them start automatically January 1.

If the cuts come into effect and stay, they will stomp out economic recovery and drive up unemployment.

But conservatives are tying that real short-term risk to a much more dubious claim: that government must trim the budget deficit and tame our national debt or we’re doomed to go the way of Greece.

Panic-mongers are using the fiscal cliff as a Trojan horse. They want to use the atmosphere of alarm to push through their cherished goals, even goals that have no relationship to the fiscal cliff or the deficit. They would lock in Bush-era tax cuts for the rich and make long-term cuts to Social Security, Medicare, Medicaid, and virtually every other non-military government program.

It’s a sign of the conservatives’ success that no one is even talking about raising corporate taxes to balance the budget, and those taxes are the lowest they’ve been in half a century.

Union members shouldn’t sit by and let a lame-duck Congress pull such a monumental bait and switch. Let the clock run out on Bush’s tax giveaway to the 1%. Force next year’s crop of politicians to address the problem responsibly.

Is the Deficit a Problem?

It’s true that this year’s budget deficit—projected to be 9 percent of U.S. economic activity—is high by historic standards. The deficit will become a long-term problem if we do nothing, but before jumping to do something, we have to look at why the debt is growing.

One reason is that instead of taxing the rich, we’re borrowing from them, and then paying them interest for the privilege.

Fixes to the deficit and the long-term debt are quite simple. The only reason “we all have to tighten our belts” gets any play is because of who’s controlling the debate.

The bulk of federal spending is on the military (23 percent) and health care, including Medicare, Medicaid, and children’s health programs (24 percent).

The obvious place to start trimming is the military budget, which is more than double what it was 10 years ago.

As for health care costs, those are skyrocketing because they are driven by for-profit health care. A single-payer system like “Medicare for all” would correct that.

Mark Brenner is the former director of Labor Notes and is currently an instructor at the University of Oregon's Labor Education & Research Center.
Related
New York City Retirees Fight to Defend Their Medicare Benefits »
Will the Stimulus Stop States From Slashing More Jobs? »
Viewpoint: This Election Shows Labor's Ground Game Matters (Especially During a Pandemic) »
Soak the Rich, Now More Than Ever »
Economics Brief: The Rise in Income Inequality in the United States »