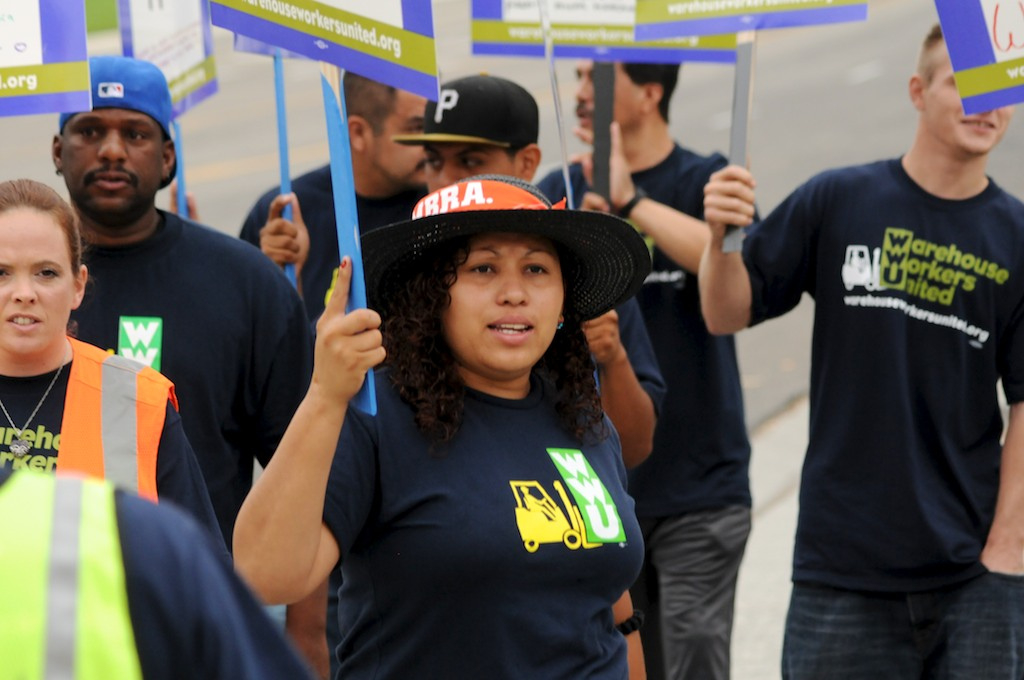 Warehouse Workers United picket in Southern California. Theirs was the first of two strikes against Walmart warehouses in one week. Photo: WWU.

A strike at Walmart? Two of them. In a time when few union members dare strike, three dozen Southern California workers who move goods for Walmart were desperate enough to walk off their jobs September 12 even without union protection.

Three days later, 30 workers who’d been organizing with Warehouse Workers for Justice in Elwood, Illinois, southwest of Chicago, walked out, too.

Both groups of workers had taken legal action against their employers, contractors who move goods for Walmart, and their strikes were protesting illegal retaliation.

California strikers asked the NLRB to investigate a half dozen unfair labor practices: retaliation against and surveillance of those who’ve been organizing with the energetic Warehouse Workers United (WWU) worker center, an affiliate of the Change to Win federation, for better conditions.

Striker David Garcia said, “For a whole week they were making me lift bicycles all day every day just to see if I would quit or give up.” Wearing a WWU T-shirt could mean being sent home early, Garcia said.

In Illinois, workers for Walmart contractor Roadlink filed suit in federal court September 13 for non-payment of overtime, non-payment for all hours worked, and even pay less than the minimum wage. When they delivered a petition to a Roadlink manager onsite, he immediately fired several of the leaders and threatened everyone else, touching off the strike. One manager tried to drive a big forklift into the crowd of workers.

The warehouse is still operating but the strike has impacted production. All strikers have been told they are suspended. Their petition to Walmart asked the company to ensure workers are paid for all their hours, with consistent work schedules and safety training and equipment.

The warehouses outside Chicago are a major portal for goods flowing into retail stores throughout the country, and Warehouse Workers for Justice, a worker center connected to the United Electrical Workers union (UE), has been working there since 2009 to support workers in getting their full pay and to fight sexual and racial harassment.

Strikers delivered a national petition to Walmart corporate offices north of Chicago, with 37,000 signatures supporting the California workers. They got support from striking Chicago teachers September 18 when 150 red-shirted teachers marched with them from a high school to a nearby Walmart store. The group received a police escort to march in the street and then went inside the store for 45 minutes, chanting.

“The idea,” said UE organizer Leah Fried, “was to link the disturbing labor practices in Walmart warehouses with the Walmart Family Fund, which has invested $1 billion in efforts to privatize public schools.” The Fund gave $3 million to a group, Stand for Children, that successfully lobbied for an anti-teacher law in Illinois last year.

On October 1, the workers plan a big rally at their warehouse with allies from unions, worker centers, and community groups.

The California workers were already planning a “Walmarch” when they hit the dusty pavement outside their warehouse the day before. Warehouse workers, supporters, and former warehouse workers who are injured walked 50 miles from the “Inland Empire,” home to hundreds of warehouses and 85,000 warehouse workers. Their destination was city hall in downtown Los Angeles, a six-day trek.

Their goal: to win immediate improvements inside the warehouses and to say once again to Walmart that it must take responsibility for the hundreds of thousands of workers in its supply chain.

Workers took the risk of striking because, having worked in other warehouses, they say conditions at this warehouse are the worst. It’s owned by NFI, a major national player in the growing “third-party logistics” industry.

Elizabeth Brennan, a WWU staffer, said some union members came to the warehouse to support the workers when they walked out. “Their jaws were on the floor,” she said. Workers say they’ve never seen conditions so bad.

Over the summer David Garcia, 29, and other workers filed complaints with both CalOSHA, the state health and safety agency, and the National Labor Relations Board. They told CalOSHA, which is investigating, about intense heat and dangerous conditions.

“There’s no lanes painted so the forklifts don't know where they're driving,” Garcia said. Springs on the ramps that lead to trailer doors are broken, so workers are manually lifting 500 pounds. On a day when it’s 95 degrees outside, he said, “inside the container it’s over 120—and whoever’s receiving merchandise stays in there all day.”

The warehouse is of the “cross-dock” type—it has a roof but no walls, and workers have no way to keep the billowing dust out of their mouths. The employer charges workers for necessary safety equipment such as reflective vests.

On the march, Garcia said it was hot walking in the sun, “but not as hot as the warehouse. Here at least we have a breeze. Here we get fresh water.” In the warehouse water comes from a hose, and supervisors discourage workers from refilling their bottles too often.

Garcia found the marching “a relief. At least we’re not getting yelled at.”

Despite harassment, Garcia didn’t quit the $8-an-hour job (California’s minimum wage), citing his five children to support. Most workers on his job are Latino immigrants.

The six-day march was an excellent chance, Brennan said, for workers to “leave the desert and interact with all kinds of other people.” Their march was joined by a contingent from the United Farm Workers one day and from OUR Walmart, a group of Walmart store workers, on another. Students, church members, union members, and community groups all walked.

Best yet, at each meeting held since the march ended, a couple more warehouse workers join the strike and start participating. Last Saturday they connected with a rally by community groups in San Diego opposed to Walmart tearing down a historical building to build a store. Picket lines in front of the warehouse continue. And, said Brennan, “the workers don't seem to be exhausted at all.”

Everything from socks to above-ground swimming pools passes briefly through these workers’ hands on its way to Walmart stores around the country. Huge containers stuffed with goods from Asia are trucked directly from ships docked in the Port of Los Angeles. NFI workers remove the merchandise and push it or forklift it across the dock to waiting tractor trailers, which will take it to Walmart warehouses or stores.

Walmart hires contractors like NFI, which owns 21 million square feet of warehouse space in the U.S., to run such “transloading” facilities, and those contractors use temp agencies like Warestaff to supply workers like Garcia.

Will County, Illinois, where the second strike took place, is a key Walmart hub with a similar set-up. In this case, Schneider National, another huge third-party logistics supplier, contracts with Roadlink for the muscle to move Walmart’s goods.

Walmart suffered a rare defeat at the hands of workers in its supply chain this summer when eight crawfish peelers in Louisiana walked out after weeks of forced overtime and threats from supervisors.

Although the eight were on H-2B guestworker visas, which tie an employee to a particular employer, they struck and presented Walmart supplier C.J.’s Seafood with a list of demands, including unpaid wages.

After the National Guestworker Alliance spearheaded a national petition campaign, highlighting the 24-hour days workers were at times forced to work, Walmart reluctantly severed ties with C.J.’s and the Department of Labor dunned the company $248,000 for back wages and fines.

The striking warehouse workers aren’t looking for Walmart to dump their contractors but to get the world’s largest retailer to enforce its own “Standards for Suppliers.” Both groups insist that Walmart sets the standards for all warehouse work, nationwide.