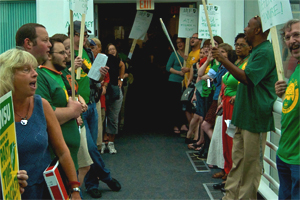 Wayne State University in Detroit has proposed a new contract that would radically redefine the terms for eliminating faculty. The school would be the first research university to effectively abolish tenure, said the faculty union, which mounted a protest. Photo: Aaron Petkov.

Wayne State University in Detroit has proposed a new contract that would radically redefine the terms for eliminating faculty.

The school would be the first research university to effectively abolish tenure, said officials of the American Association of University Professors (AAUP), opening the door for other campuses under pressure from cuts in public spending to try similar moves.

Traditionally, tenured faculty could be removed only after undergoing an extended peer review or in cases where the university is facing extreme financial stress.

The contract language management proposed in late July, however, would effectively remove peer review and centralize the power to terminate faculty in administrators’ hands.

When the university’s chief negotiator, James Green, was asked if the new terms would amount to eliminating tenure he replied, “It would have that effect, yes.”

University President Allan Gilmour, a former top-level executive at Ford, quickly denied the charge. “Faculty tenure is an important aspect of academic freedom,” Gilmour told reporters, “but it cannot be a place to hide for those whose performance or behavior is poor.”

Wayne State enrolls nearly 32,000 students, 89 percent of whom are from metro Detroit, and has almost 3,000 faculty members. About a third are tenured or tenure-track. Faculty are represented by a joint AAUP-Teachers (AFT) Local 6075.

The proposed contract would allow the administration to remove faculty in cases of “the substantial curtailment or discontinuance of a program which removes any reasonable opportunity for using a faculty member's services,” a “failure to meet professional responsibilities,” a “failure to perform academic assignments competently,” and a “financially based reduction in force.”

Michael McIntyre, a law professor and union member at Wayne, said the language amounts to a “frontal attack on tenure.”

According to Wayne State history professor Fran Shor in a letter to the Detroit Free Press, “there is no provision for peer review of an administration-initiated termination of tenure,” only “the possibility of ‘looking for mutual settlement’ after the fact.” The union could file a grievance and hope for an arbitrator’s ruling to reinstate a fired member, but is unwilling to take decisions about academic performance away from fellow faculty, who, the union argues, are best suited to judge.

Management also wants a provision limiting faculty members’ political freedom, by allowing professors to be terminated for “intentionally causing injury to persons and/or damage to property, forcibly interrupting the normal daily teaching, research or administrative operation of the University or directly inciting others to engage in such actions.” This kind of vague language would leave the door open to disciplining or eliminating tenured faculty who participate or assist in organizing protests on campus, such as the recent Occupy protests that swept campuses and cities across the United States last fall, or the ongoing student strike in Quebec.

According to Shor, the assault on tenure is another step in the “corporatization of the university.” Recent decisions like the appointment of Gilmour, the first Wayne president with no academic background, and the elimination of the Interdisciplinary Studies program that primarily served working-class people of color, have little to do with the economic realities facing the university, Shor said, and more to do with “politically motivated decisions about who the university should be serving.”

Department closures, layoffs of non-academic staff, extreme increases in tuition, and increasing reliance on adjunct faculty all point toward a radical shift to what some union members have been calling a corporate model of higher education. The cost of attending Wayne State full-time has risen from $3,970 a year in 2000 to $10,188 a year now.

If faculty accept the abolition of tenure, they would harm not only their own job security and academic freedom but also the quality of students’ education, argued Shashi Thandra, a graduate student in Wayne’s English department.

“Abolishing tenure will devalue their degrees because they would no longer graduate from a research university,” Thandra said. “Tenure protects freedom of research and without tenure, faculty can only research what university administrators will allow.”

The school will no longer be able to attract top-flight faculty, who would refuse to work in a setting where they cannot research with security, Thandra said.

Other universities have been experimenting with terminating tenured faculty, including the eight-campus University of Louisiana system last year. Florida State University tried to lay off 21 tenured faculty two years ago, but the move was blocked by an arbitrator.

At Wayne State, the administration and the union have agreed to extend the contract, which was set to end July 31, and established a six-person committee to review tenure rights. Faculty have until September 30 to plan their next move.

Aaron Petkov is a Detroit-based activist.