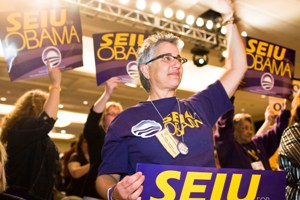 A recent Supreme Court ruling will make it harder for public sector unions to raise funds for political action, like this 2008 rally in Philadephia. Photo: Ryan Donnell, SEIU.

In an ominous late June ruling, the Supreme Court paved the way for rewriting the rules on how public sector unions collect dues. The result could curtail those unions’ spending on political action.

On a 7-2 vote, the court said non-members in a unionized workplace must opt in rather than opt out of any special dues assessments. If this opt-in principle is extended more generally, which the court seems prepared to do, it could lead to a public sector version of so-called “right to work.”

“That would be a sea change,” said Joseph Slater, law professor at the University of Toledo and expert on public sector collective bargaining. “It would make it much more difficult for unions to raise money for politics.”

Since the 1947 Taft-Hartley Act, 23 states have passed right-to-work laws allowing private sector workers to reap the rewards of union contracts without paying any of the cost of their upkeep, a deal commonly known as the “open shop.”

Many union leaders think the issue is bigger than curtailing unions’ political action.

“The public sector is the last bastion of organized labor,” said Henry Garrido, associate director of the 120,000-member AFSCME District Council 37 in New York City. “They’re coming after us because we’re fighting for fair taxation, for an economy that works for more than just the 1 percent.”

By federal law all non-members in unionized workplaces covered by a union security clause are notified every year what portion of union dues is used for political activity. They are given the choice to opt out of these political expenses and pay a reduced “fair share” or “agency fee” covering only the union’s expenses related to representation and bargaining.

For many public sector unions the difference between full dues and agency fee is small. But in large, politically active locals like SEIU Local 1000 the difference can be substantial: non-members paid 44 percent less in 2005.

Because SEIU’s special assessment—which raised dues from 1 percent of gross salary to 1.25 percent—occurred after the annual notification, non-members who had not previously opted out of paying for political work were automatically subject to the assessment. Only after several non-members sued the union were they allowed to receive a refund.

The Supreme Court said that was not enough: all non-members should have been notified to see if they wanted to opt in for the assessment.

The ruling casts a shadow on the whole opt-out approach to using union dues for politics. Although the issue was not debated before the court, the justices took it up anyway, claiming in the majority opinion that opt-out had been established “as a historical accident.”

More than 50 years ago the Supreme Court established that non-members in unionized private sector workplaces could not be required to fund partisan political or so-called ideological activities. The court ruled that non-members could opt out, and in 1977 affirmed the same rights for public-sector workers.

The court’s ruling is sure to energize the various state-level initiatives designed to curb union dues collection and political spending, most notably deceptively titled “paycheck protection” laws—already on the ballot or proposed in the legislatures of 11 states.

These rules, which have been pushed for years by corporate-backed groups like the American Legislative Exchange Council, would force public sector unions to seek opt-ins from their own members for political spending. ALEC was thrust into the national spotlight last year after state legislatures in Wisconsin and Ohio pushed through anti-union measures it championed.

After Walker terminated collective bargaining and ended dues check-off, Wisconsin membership in the public sector union AFSCME dropped to 28,745, falling by half between March 2011 and February 2012, according to a recent Wall Street Journal report. Locals were left strapped for money and forced to cut back on representation and education.

Although the percentage of non-members in public sector workplaces varies by area and occupation, moving to opt-in could come with a heavy cost.

For example, New York’s AFSCME District Council 37 now collects agency fees from close to 20,000 workers, out of 117,000 in the union’s bargaining units. Losing those fees could cost the union close to 15 percent of the $38 million it receives in dues and fees annually.

Experience shows that unions long accustomed to relying on employers for dues collection are ill-equipped to do it themselves in open shop conditions.

In 2011 Wisconsin, public employees came out to fiercely defend their unions in a way not seen for decades. But once Walker succeeded in stripping unions’ right to bargain, many members fell away. Fear of retaliation from newly aggressive managers has undoubtedly kept some from signing up.

To survive, unions are being forced to put more of the work of the union in members’ hands.

“Lots of folks are learning a lesson a hard way,” said Marv Vike, a snowplow driver from Janesville, Wisconsin, and president of AFSCME Local 1077. “Now you have to fight to keep everything you got.”

Despite the new limits on collective bargaining, Vike’s small local boasts a 96 percent membership rate, and even won modest wage gains from the county this year.

But the climate of fear and nonstop demonization of public workers and their unions can cause paralysis.

“Too many people are waiting for the other shoe to drop,” said Keith Kelleher, president of the 90,000-member SEIU health care local covering Illinois, Indiana, Kansas, and Missouri.

Kelleher noted that unions started years ago as voluntary associations, and that some current unions—like NEA, which represents tens of thousands of teachers in right-to-work states—have been able to thrive under the difficult provisions of “opt-in” unionism.

Related
The Hows, Whys, and Whats of ULP Strikes »
Richmond Educators Are First In Virginia to Win Bargaining Rights »
Open Bargaining Brings the Power of Members to the Table in Berkeley »
New Jersey Welfare Workers Sound the Alarm on Safety »
New York City Retirees Fight to Defend Their Medicare Benefits »