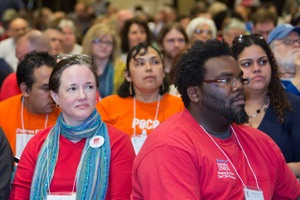 We have to view our work—organizing work—as a means of resisting corporate control, with the belief that at some point a critical mass will exist and we’ll topple it. Photo: Jim West.

Organizing has fallen off the map in most conversations about labor’s future. Every day we shrink further and further. Every organizing drive is more difficult to win. What—if anything—is refreshing about our organizing?

My union, the Communications Workers, is organizing 10,000 passenger service workers at American Airlines. The airline is refusing to provide the National Mediation Board with an employee list, flat-out defying the law. And they’ve gotten a Bush-appointed judge to block the election, at least temporarily.

Nothing refreshing about that.

Almost a year since expiration, CWA doesn’t yet have a contract at Verizon, a company that continues to rake in mega-profits while demanding an end to worker pensions.

In Wisconsin, the Koch brothers outspent us by $25 million and Scott Walker did not get recalled. They won. We lost. How the hell do we get out of bed in the morning?

The changes in the labor movement, the economy, and politics since the first issue of Labor Notes came out in February 1979 have been profound.


For our 400th issue, Labor Notes asked several activists to address what happened to labor—and what we should do given the spot we're in.

Are We at a Tipping Point?
Mark Brenner


Donate today and support the movement you want to see.

I hesitate to use the term fascism because it is so historically loaded. Day to day, what we experience doesn’t feel like what we imagine fascism feels like. But corporate control of government—what we have now—is an end to democracy, and it may be that the F-word is becoming more appropriate.

What do people like us do when they are fighting fascism? They form a resistance movement. And that movement takes on small fights, and grows them, until they become big fights. A resistance movement fights whether or not it is winning at that moment. Its purpose is to resist for as long as it takes, against the odds, until things change.

Our enemy is corporate power. That power is too strong for us to take on the whole thing at once. We have to view our work—organizing work—as a means of resisting corporate control, with the belief that at some point a critical mass will exist and we’ll topple it.

Recasting ourselves as a resistance movement and thinking about our work that way will help us to maintain the energy, the will, and the optimism we need.

The CWA organizing in Brooklyn at the cable provider Cablevision was like that. We organized around worksite issues, but the drive itself was placed in the context of a corporate giant exploiting workers and consumers.

Our democratic worker committee embraced this frame and took it further, turning the organizing drive into an offshoot of the civil rights movement. The workers saw themselves like modern-day sanitation workers, recalling the Memphis strike of 1968 and declaring “I Am a Man” before the boss.

It was a joyous and affirming drive. The Cablevision workers took all of what the professional union-busters threw at them and won a high-profile victory, leading to many leads across Cablevision and its contractors.

Within months we were organizing at other Cablevision locations, where the company is so worried it gave out $9-an-hour raises. We hope to keep the momentum growing to take on this industry.

A resistance movement takes strategic risks. Resistance isn’t clean or collegiate. It isn’t done with briefs or grievances. It’s a stick in the eye.

A few days ago, a Cablevision contractor fired a worker who was openly organizing. At 6:30 a.m. the next day the workers went on strike. Two Cablevision suits showed up to tell the contractor not to concede to the workers’ demands that their co-worker be returned to work.

The workers were scared. The leadership of the union was scared, too. But they took the risk and stayed out. Twenty minutes after the bosses said they would shutter the business rather than give in, a boss came out to the picket line and said, “OK, you won.” Our guy was back to work.

Now imagine that scenario if we had filed an unfair labor practice. Not only would nothing have happened, you can be sure the workers would never have heard a boss tell them “you win.”

Things rarely go as smoothly as this strike did, but if we learned anything from those crazy kids who decided that the way to fight Wall Street was to go camping, it is that when we put things in motion, things can change.

And if we don’t put things in motion, then things don’t change. Direct action organizing is what we need. Direct resistance to power using the power that we have—ourselves.

Each union or group within the resistance movement can pick an arm of corporate power to go after—one industry, one company, one festering sore within the corporate complex—and make fighting it and organizing it a cause of its own.

Plan on spending years doing it. Become experts on that piece of the enemy. Make them your hobby. Expose them. Ridicule them. Occupy them. Use stealth and upfront attacks. Whether it’s picking an industry to organize, or a bank to torture, or agribusiness to expose, pick one and have at ’em. Fight what they do. Fight who they are.

We need a broad and exciting people’s education program, we need non-majority unions, and much more. But if we are going to maintain our optimism and energy, we have to view our movement differently. We have to see each thing we do as an opportunity to hit the chinks in the armor of our adversary.

Our enemy is big, rich, and bad. But we can go at it like David goes after Goliath. Not like “big labor” taking on “big corporate” but like resistance fighters slinging a shot between their eyes.

It’s fun, it’s angry, it’s true, and it’s a hell of a lot better to take joy beating up on the enemy than to be miserable about the beatings we receive.

Hetty Rosenstein is the director of New Jersey CWA.

Concerning your article I agree 100%, but, labor unions really need to get their own house in order first. I can't imagine how much of our dues monies labor unions spend raiding each other's members. I was represented by the IAM then AMFA and now the IBT. Meanwhile corporations are sitting back enjoying this show labor unions have provided. Meanwhile, work groups out there who need labor unions are being ignored for in my opinion because it's too difficult to organize them. Meanwhile corporations are winning the propaganda war on labor unions. Labor union membership is in decline and if they want to recover they must focus on those who need representation, not those already represented. Thank you. GT Davis