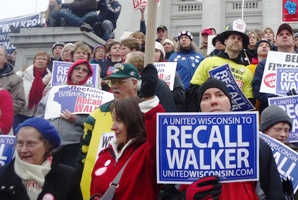 Wisconsin public workers face harsher work rules and shrinking paychecks as contracts expire and Governor Scott Walker’s anti-union bill sets in. Unions are being forced to shift from a servicing model to an organizing model in a fight for their survival. Photo: Karen Hickey/Wisconsin AFL-CIO.

Wisconsin public workers face harsher work rules and shrinking paychecks as contracts expire and additional provisions of Governor Scott Walker’s anti-union bill set in. State unions are being forced to shift from a decades-old servicing model to an organizing model in a fight for their survival.

New compensation rules took effect January 1, increasing the amount employees pay toward benefits. Union contracts for the majority of state workers were terminated, though some county and municipal employees still have contracts in place.

Walker’s bill banned collective bargaining over everything but wages, eliminated dues check-off, and stipulated that unions hold annual elections to maintain certification. It required that public employees, who have traditionally accepted lower wages than private sector employees in exchange for better benefits, take 10 to 15 percent pay cuts to fund their health care and pensions.

Workers must now pay 10 percent of their medical bills up to a yearly maximum of $500 for individuals and $1,000 for families. This comes on top of earlier insurance givebacks in August. “People are feeling a tremendous pinch,” says C. Estelle Clark, an AFSCME Local 2748 member. “They already weren’t making ends meet before this.”

Clark says take-home pay at the state’s Department of Workforce Development is now less than it was 10 years ago.

State agencies have been told to develop new policy manuals on work rules—without worker input. As of mid-January, many have yet to do so, leaving employees to work under uncertain conditions.

“It’s chaos. You’re just supposed to go to work and do whatever they tell you,” says Troy Bauch, a staffer for AFSCME Council 24 in northern Wisconsin. He reports changes in scheduling for shift employees and an increase in firings and discrimination cases.

Just days after the plan went into effect, an AFSCME local president at the University of Wisconsin-Milwaukee was fired for absences dating back to August. According to Bauch, management waited for union work rules to expire so it could “discharge her without recourse.”

Janitors at the University of Wisconsin-Madison will soon receive an effective 6 percent pay cut when a new policy mandating unpaid lunch breaks kicks in. Management is denying union reps access to certain buildings on campus, too.

Decades-old grievance procedures outlined in contracts have been replaced by state and local civil service procedures. Union members have lost the right to file grievances over discrimination, performance evaluations, scheduling and work assignments (including overtime), and the content of work rules or policies.

Independent third-party arbitrators have been replaced by staff from a state agency that is led by a Walker-appointed corporate lawyer from a union-busting law firm.

Without contracts to protect working conditions, some unions are turning to direct action—and winning. Where a grievance would have been filed before, “now it’s ‘get people to the picket line,’ says Ed Sadlowski, an AFSCME Council 40 staff rep. “Direct action gets the goods.”

Told to remove the shirt, he stood bare-chested and was sent home without pay. The union promptly began organizing for a rally. Though management quickly repealed the illegal ban, the rally went on as planned four days later, with 75 people in attendance.

“Management realized it was beyond their control,” said Bauch.

When highway workers in Jefferson County were told that overtime would no longer be assigned by seniority, they marched on the boss with a petition signed by every employee. By the next day, the old policy had been restored.

Unions have been hit hard by Walker’s elimination of dues check-off. While some smaller shops and a number of locals in the northern part of the state have managed to retain high levels of dues-paying members, Wisconsin Professional Employees Council steward Barbara Smith says the share of members in good standing has dropped below 25 percent at some state agencies.

Despite this, Smith sees a silver lining in the pressure the new situation is putting on unions to engage their members. Across the state, unions have launched campaigns to encourage members to “recommit” to their union as dues-payers, signing up for automatic deductions from their bank accounts.

More than just fundraising efforts for unions with diminishing resources, door-to-door canvasses, phonebanks, and membership meetings have served as an opportunity for members to discuss why belonging to a union is important in the first place—conversations that many feel should have been happening all along.

At first, staffers lobbied members of Estelle Clark’s local on their own. Members started joining staffers for house visits, she said, “because they could relate better to their co-workers,” and gradually started learning organizing skills themselves. House visits became a way not only to talk to inactive members but also to develop leadership skills among activists.

The most successful efforts to increase the ranks of dues payers have been member-led. AFSCME members at the Rock County highway shop decided they would all open accounts at the same credit union. Seventy-six out of 80 are now members in good standing.

Efforts to recall Walker and four Republican state senators have also been an organizing tool for unions working to deepen member engagement.

Thousands of members were among the activists who collected about 1 million signatures on the petition to recall Walker, far outpacing the 540,000 needed to trigger a new election.

Even if Walker gets the boot, a vote of the legislature, still majority-Republican, would be required to overturn his anti-union legislation. It’s unlikely that collective bargaining rights will be restored any time soon.

Nonetheless, says Bauch, there’s no alternative but to fight. “We’re a few yards away from Mississippi,” he said. “If Walker gets a few more years, there will be no separation.”

Labor unions are created to help workers have better benefits as well as better pay. But if our government do not have a better solution with this rising conflict with the unions, more and more problems will arise in the future, not only with the unions but the quality of work they offer. secrets of the millionaire mind

Even though a strike would have been the best and most effective response to basic human rights being denied, it could never happen because "union leaders" in WI are also too involved in looking out for their own self interests.

I agree with previous post. They should have called a general strike in Wisconsin. Recalls are bullshit. Demopulicans are too much the same entity. As Ema Goldman said, "if voting changed anything, it would be illegal." Kick the bosses in the ass, power to the working class!

As I read the latest sad news from Wisconsin on the dwindling power of their state workers, I wonder -- why did they not strike last year? Why did they instead go into the lengthy and shakey business of a recall campaign? They had the upper hand; the whole world was with them. Why did they not use that power to win?

It is a a terrible thing that the word "Strike" is now a scary word even for union members! I see unions -- teachers unions, nurses unions, those in shipping and transportation, others in other walks of life, shying away from the one tool that will do them good. When will high techies and others in office work unionize and join their brothers and sisters? The workers of this world need to consolidate their strength and stop the system that is rolling over all of us. If we keep bowing down to the insistence of the state and corporate leadership with their budget cuts of our services and low taxes for corporations and the rich, we will be forever the 99% begging for scraps from the 1%.

The people in power will not give up that power until they see that we are serious and that we will not be staved off with false promises and disrespect. This is our country. We built it. We made it. We keep it going. And we have the right to stop its running when it treats us unfairly. And that is precisely what it is doing.