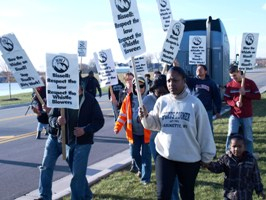 Heading down I-55 or I-80 southwest of Chicago, a driver passes mile after mile of anonymous, windowless warehouses. Each year a trillion dollars worth of goods moves through the area, one of the bigger nodes in the global distribution network of consumer products.

Computers, air conditioners, vacuum cleaners, Halloween costumes arrive at West Coast ports on ships from Asia, are loaded onto trains, and chug to the City of Big Shoulders, where all six Class 1 railroads meet. Workers offload the goods, which are piled onto trucks or other trains and travel to the big boxes.

In between, those goods spend some time in a warehouse. “If it wasn’t for us, none of the stuff you have in your house would be in your house,” says Monica Morales, a former worker at a warehouse for Bissell, the vacuum cleaner maker. “There’s not many items that we don’t touch.”

UE scored a victory among another category of workers in the sprawling intermodal facilities around Chicago: those who drive the vans that shuttle railroad employees from yard to yard and from trains to hotels.

Twenty years ago this was a union railroad job at $20 an hour. Today it’s contracted out to a company called Renzenberger, and pay started at minimum wage with no paid days off—until the union arrived.

The railroads haul goods from West Coast ports to Chicago for big retailers like Target and Walmart. The retailers’ relentless squeeze for cost reductions led the railroads to contract out to a bottom-feeder like Renzenberger.

Much of the workforce is on call 24 hours a day, and many work second jobs, creating a safety issue for sleep-deprived drivers and their passengers.

Last year the 160 Chicago-area Renzenberger workers at the Burlington Northern Santa Fe voted for the UE by a 3-to-1 margin.

James Hill, president of the new local, says they won a dollar an hour raise over three years—but he’ll still be making only $11.25.

The Steelworkers have won a Renzenberger unit in Pennsylvania, and UE is organizing in California, Ohio, and New Jersey. The company has thrown a wrench in those plans by bringing in National Production Workers Union Local 707, an outfit known for signing sweetheart deals with employers that want to keep workers from forming legitimate unions.

Morales was fired in November 2009, along with 70 co-workers, a week after they filed charges against their employer, the contractor Maersk Logistics, for violations of minimum wage, civil rights, and labor laws and told management they had formed a union.

She is a member of Warehouse Workers for Justice, a worker center affiliated with the United Electrical Workers (UE). WWJ unites workers from across the dizzying array of contractors that operate in the warehouses and helps them fight for their rights with lawsuits, media pressure, and in-plant actions.

On October 15, with support from WWJ, UE launched an organizing committee, pulling together 50 leaders from different shops as a first step toward forming a union among the 150,000 warehouse workers in the area.

The dues-paying membership organization elected a steering committee and video-conferenced with warehouse workers in New Jersey and the Inland Empire in California (see box) who were having similar meetings at the same time.

Workers’ issues are abundant and so are their obstacles.

The big retailers like Walmart often hire logistics companies that manage the warehouses, and those companies often staff through temp agencies.

A survey WWJ conducted with university researchers found 63 percent of warehouse workers in Will County, west of Chicago, are employed by temp agencies. There are 100 temp agencies in that county alone, both big national companies like Staffmark and small ones that are locally owned.

“This is where our economy is headed,” said UE International Rep Mark Meinster. “We’re seeing this type of temporary employment in manufacturing, hospitality, health care, even retail. Unions need to organize temp workers if we’re going to build power in this economy.”

A fifth of the workers surveyed had been working as a temp for more than a year. Forty-four percent had worked in two or more warehouses in the last year, unable to land a “direct-hire” job.

The median wage for the temps surveyed was $9 an hour, while direct-hire employees’ was $12.48. Almost no temp workers had sick days, vacation, or health insurance. A quarter of all warehouse workers received government benefits of some sort.

The Change to Win labor federation is sponsoring a group called Warehouse Workers United to organize in a similar complex of warehouses in California’s “Inland Empire” east of Los Angeles.

Their organizing received a boost October 12 when the state labor commissioner raided a Schneider Logistics facility that moves stock for Walmart. Schneider is one of the country’s largest shipping and warehousing firms, and this warehouse is the most important Walmart facility in Southern California.

Guadalupe Palma of WWU said, “This raid will force the entire logistics industry to take notice.”

Two subcontractors were issued citations for violating labor law, such as failing to provide workers with wage statements or keep wage and hour records. False pay records were found. One company was fined $499,000. Labor Commissioner Julie Su said the state would assess the companies for “all wages owed to the workers.”

Everardo Carrillo said his subcontractor “didn’t respect our hours or shifts. They would tell you there is no set schedule.” He would be told to arrive at 5 a.m. and then wait until 8 a.m to start. Workers were not paid for waiting time, which is illegal, and wage-cheating was common.

Carrillo said workers were paid by the container they unloaded. “They [management] didn’t care if you killed yourself working there,” he said. “It didn’t matter the size of the boxes that you had to move. You had to move it however you could do it.”

Didn’t the company provide forklifts? “They said, ‘If we help you with the forklift, it’s like we’re giving you money for free,’” Carrillo said.

Warehouse Workers United said workers at the Schneider warehouse function in temperatures sometimes over 100 degrees, for up to 15 hours a day, often seven days a week.

On October 18 the group announced a federal class action suit against Schneider and the two subcontractors, alleging they regularly pay less than minimum wage, deny overtime pay, and have fired workers who challenged the vagueness of their checks.

A big issue is piecework, where workers are paid by the shipping container. Depending on the contents, a team of two workers might take a few hours or a whole shift to unload a container—sometimes leaving them with less than minimum wage.

Though the contracting-out system poses an organizing challenge, Meinster says it can be overcome. “Much in the way the SEIU’s Justice for Janitors campaign targeted building owners who had the real power,” he said, “we are targeting the large retailers who benefit from the labor abuse in their supply chains.”

In its organizing thus far, WWJ has found enough stability in the workforce to form an organization that can win gains. It is aided by an unusual Illinois law that gives some rights to temp workers. The law spells out temp companies’ obligations to inform workers of their pay and job duties and specifies their right to a secure, heated waiting area, with a restroom.

Most important, the law makes not only the temp agency but also its client company responsible for following the law. Workers can file a complaint against Walmart or Home Depot for violations that happen in their warehouses.

“Instead of simply filing a lawsuit, workers will march on the boss or do press conferences to expose these abuses,” said Meinster.

In one large warehouse that distributes foods to ethnic grocery stores, 10 Latino workers alleged they were fired based on their national origin. With assistance from WWJ, workers signed petitions and organized protests against management.

WWJ organized a large delegation of Chicago Latino community leaders to visit the plant and warn management that discrimination against Latino workers would bring on a boycott of the company’s products. The workers were rehired.

At a warehouse that shipped Cadbury candy, WWJ got complaints from workers about swastikas and KKK signs in the bathrooms and break areas. They said managers for the temp company that ran the warehouse sexually harassed women workers and discriminated against Blacks and Latinos for promotions.

Workers went to management repeatedly about the graffiti and old, unsafe forklifts, but supervisors turned a deaf ear.

WWJ helped workers organize a committee that circulated petitions and carried out marches on the boss. They filed suit and went public with their claims, garnering media attention. Cadbury’s parent company, the multinational Kraft Foods, intervened, firing managers, scrubbing the graffitti, and addressing safety issues. The discrimination cases are pending at the Equal Employment Opportunity Commission.

On October 18 WWJ filed a class-action suit against Nexus Employment Solutions, the temp agency at a Tyson warehouse. Workers allege they were required to work without pay for almost an hour before being allowed to clock in. “If we didn’t show up 45 minutes early, they wouldn’t let us work,” said Nancy Price, who worked for Nexus for 10 months.

EVERY DAY A RACE

WWJ member Uylonda Dickerson lost her job at a Walmart warehouse six months ago. “This job was actually like a race,” she said. She and a partner, who were paid by the piece, would pull up a cart to a trailer door and unload, by hand, whatever items were inside, from swimming pools to patio sets.

They then pulled the cart, by hand, to the other side of the warehouse, where the items were loaded onto another trailer bound for Walmart stores. “Then you go back and do it all over again,” Dickerson said.

Now Dickerson is a regular at WWJ rallies and has gone door to door to recruit. She says at meetings, “we talk amongst ourselves to see what we can do better. We make each other feel good, because we might be down and out. If you can go sit down and talk with strangers that feel like family to you, that makes a big difference.”

See the report on the conditions of warehouse workers in Will County, based on a survey of 319 workers at 150 warehouses.