Action on the Job: Tips and Traps 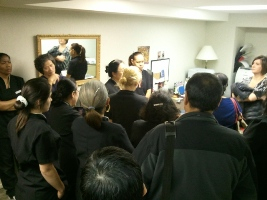 Hilton housekeepers confront their general manager about unfair workloads on October 20 in Anchorage, Alaska. They presented a petition signed by 95 percent of housekeepers complaining that increased workloads since their contract expired in 2008 are causing injuries. The workers called for a boycott of their hotel in 2009. Photo: UNITE HERE.

Workers have the right to organize and take action inside the workplace against an employer, even with a contract and grievance procedure in place. Section 7 of the National Labor Relations Act guarantees this right, but there are many restrictions.

Stewards and union reps need to be militant but smart. They need to know how to bend the rules without getting their people in trouble. Here are two examples of how to take (or not take) concerted action.

Bathroom-line solidarity: After a long community-wide battle to stop a tool-manufacturing company from shutting down and moving the factory, the company built a new factory—but extracted a wage freeze from workers.

After two years of this, the workers and the union had had enough. Union leaders pushed workers to begin a campaign to convince the company to reopen the contract and end the wage freeze.

The campaign had several parts. Incentive workers followed the contract exactly and produced enough parts to meet the 100 percent rate. Most workers had previously produced a lot more, but now the company was receiving 30-40 percent less production.

At break and lunch times, workers would line up at the bathrooms and at the pay phones to call home. At times there would be lines of 100 workers. Of course, not every worker could make their call or use the facilities during the 15-minute break or 20-minute lunch.

The lines remained after the breaks were over. Supervisors would order people back to work, but this would take time, as many workers would patiently explain to the boss why they needed to call home (sick kids, spouse emergency) or why they needed to use the bathroom.

If directly ordered they would politely agree and return to work, or leave and then get back in line, ready with a new explanation if the boss should confront them again.

These actions continued for six months every single day, until the company agreed to reopen the contract.

What did the union do right?

Everything. They never gave the company a chance to discipline workers for insubordination. No one ever told a boss to go to hell or refused a direct order. Participation was never 100 percent, but workers did not turn the fight on themselves. They remained focused on the company.

Whistling down the boss: Workers at a window factory were extremely mad at the owners. Managers refused to discuss grievances seriously and were harassing many workers. They decided that action was needed to make management deal fairly with them.

One day at lunch time, the entire factory marched into the offices, blowing whistles, chanting slogans, and carrying signs. The secretaries looked on in disbelief.

Management came out and tried to talk to the union rep, but he wouldn’t talk. The boss shouted an order for people to go back to work, but the noise was so great no one could hear him.

The workers’ 20-minute lunch period ended and no one returned to work. Soon the bosses began going up to each worker and ordering him or her back to work. Some left, others stayed. After about 10 minutes the remaining workers marched back to work and the union rep left the factory.

At the end of the day the company fired 10 workers for insubordination. These 10 had been the very last to leave the bosses’ office.

The union filed a charge with the Labor Board that the firings were retaliation for protected activity, but the board ordered the union to arbitrate. The board’s longstanding position is that unions should first arbitrate anything that could possibly come under the contract—like discharge for just cause.

At the hearing the union rep and some of the workers were clearly hostile to the company and aggressively proud of what they’d done.

The arbitrator did not react well. He made it clear he did not like the whistle-blowing, the disrupting of the secretaries who were not on lunch break, the refusal to follow the bosses’ orders, and the over-staying of the lunch break.

But he singled out the union rep for preventing the secretaries from working. Workers had overstayed their lunch break and many had refused a direct order to return to work.

His solution was to return seven of the 10 to work and uphold the dismissal of three union leaders who were the last to leave the boss’s office (and were the most macho on the stand). The union’s appeal to the board was unsuccessful.

What should the union rep have done differently?

• Not marched into an area where other workers would be disrupted.

• Kept a close eye on the clock and made sure everyone was back to work before the lunch break was over.

• When the boss gives a direct order, try to discuss it with him. If he won’t, smile and switch tactics.

• Understand that one action usually doesn’t win the day. It takes persistence to win.

David Cohen is a retired United Electrical Workers international rep and Judy Atkins is the former president of UE District 2.