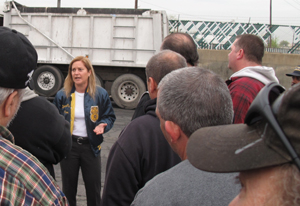 Most Teamster conventions in the last 25 years have been held in Las Vegas—for good reason.

During a period of steady union decline, there's no better place to escape reality than a city based on make-believe. There in the desert, amid phony Egyptian pyramids, ersatz Italian villages, and other costly flights of architectural fancy, top leaders can spend a whole week pretending everything's just fine and dandy, while Teamster contracts deteriorate.

This year's all-expense-paid official vacation runs June 27-July 1, with more than 5,000 delegates and guests scheduled to attend. Per usual, many plan to eat, drink, gamble, listen to speeches, applaud (or boo) on cue, and go home. But the convention will see telling reminders of rank-and-file discontent.

The main bit of unpleasantness for 70-year-old IBT President James Hoffa will be the nomination of other candidates for his job. Unlike most unions, which elect their top officials at conventions, the IBT holds a separate referendum vote of the members.

Hoffa would prefer that the 2011 convention be a mere coronation, eliminating any need for a contested membership vote. Instead, for the fifth time since 1996, the son of the Teamsters' most famous past president will be facing an electorate of more than 1.3 million—which is showing signs of Hoffa fatigue.

Sensing that political weakness, two challengers have stepped forward. Each will be on the ballot this fall if they're backed by 5 percent of the delegates.

Sandy Pope, president of Local 805 in New York City, and Fred Gegare, a Teamster board member, former Hoffa ally, and local officer from Green Bay, Wisconsin, have been campaigning since last year. Pope has the backing of Teamsters for a Democratic Union (TDU).

Both challengers are aiming their fire at Hoffa and not at each other. Pope's strategy, however, is to mobilize an army of grassroots supporters, whereas Gegare's is more oriented toward splitting the officialdom.

Pope's team gathered 50,000 petition signatures last fall to gain access to membership lists and pages in the union magazine, while Gegare fell short. Gegare is a recent convert to the Dump Hoffa bandwagon: he appeared at the last convention decked out in a "TDU Sucks" pin.

In the two previous elections, TDU-backed candidates have secured 35 percent of the vote. For Pope to break through, she needs the support of some disillusioned local officers, to tap the strong anti-Hoffa sentiment among members, and for Gegare to take more votes from Hoffa than from her.

Between now and the mail ballot vote in October, both Pope and Gegare will be calling attention to Hoffa's manifest failure to "Restore the Power"—the slogan of his first (and failed) bid for the presidency against reform incumbent Ron Carey in 1996.

Hoffa was, at the time, a low-profile Teamster lawyer in Detroit, who had never been a shop steward, local officer, national staffer, or executive board member. Yet somehow, he implied, the magic of the Hoffa name was going to win better contracts, organize the unorganized, and rebuild Teamster clout.

Things haven't turned out that way. Hoffa has proved to be putty in the hands of trucking management, making little effort to mobilize members in the militant fashion that proved so successful in 1997 when 200,000 Teamsters, led by Carey, staged a nationwide strike at UPS.

The resulting settlement called for creating 10,000 full-time jobs by combining part-time ones—but it has since unraveled as the Hoffa administration has let the largest transport company in the world do as it pleases.

UPS now employs a quarter of a million Teamsters, 20 percent of the total membership. Its first-quarter profits in 2011 are up 66 percent over the first quarter last year and the company is projecting record returns.

Yet UPS has obtained a series of concessions that have left Teamster activists (and some local officials) angry and dismayed. They include letting UPS pull out of a major pension plan, endangering benefits for thousands of retirees at other companies; a substandard contract covering newly organized workers at UPS Freight; and lax enforcement of subcontracting restrictions.

If Hoffa is re-elected, he'll be handling UPS bargaining again in 2013. What's left of the National Master Freight Agreement—now covering only 40,000 drivers and dock workers—also expires that year, at the same time as the pact for UPS's freight division.

If Pope defeats Hoffa, she pledges to spend 2012 gearing up for these fights by rebuilding the kind of mobilization network that made the UPS strike a winner 14 years ago.

"If I take over," Pope said, "we're going to hit the ground running by having national meetings of UPS and freight locals to plan immediate enforcement of the current contract, which has been ignored. We'll use that effort to gear people up for bargaining the next year, using direct action.

"Hoffa doesn't want to involve the members because it raises expectations, and he's more interested in being cozy with the companies."

According to Local 814 President Jason Ide, who shares office space with Pope's local in Queens, "the attack on labor has gotten so bad that more local officers are now recognizing the need for greater solidarity and better coordination between locals."

In the Northeast, for example, the largest third-party grocery distributor, C&S, is spearheading the de-unionization of grocery warehouses and has wiped out 1,500 Teamster jobs in 2011 alone. IBT locals in New York, New Jersey, Massachusetts, Maryland, and Washington all face further losses if outsourcing to C&S continues.

Yet when a coalition of locals coordinated leafleting at retail stores in protest, IBT headquarters had to be pressured into supporting them.

As Ide points out, there are two strategies for dealing with de-unionization of trucking, construction, warehousing, moving and storage, waste disposal, and other Teamster industries. One is resisting contracting out and organizing the non-union competition. The other is "giving concessions so our employers can compete with non-union firms."

According to Ide, the latter course "just causes non-union competitors to lower their prices" and puts more downward pressure on everyone.

But even in the surreal, unrepresentative world of Teamster conventioneering in Las Vegas, there will be some independent-minded delegates who think it's worth trying.

A version of this article appeared in Labor Notes #388, July 2011. Don't miss an issue, subscribe today.

Steve Early was a longtime Boston-based national union representative for the Communications Workers of America. He has written four books about labor and politics, including Save Our Unions (Monthly Review), and just co-authored a new book dealing with veterans’ issues. He can be reached at Lsupport@aol.com.
Related
Labor Notes Conference 2022: It’s Gonna Be Big »
Here's What's in the New Bill Jointly Backed by Uber and the Teamsters in Washington State »
UPS Drivers Stage a Walk-in to Defend a Fired Co-Worker »
Teamsters United Takes the Wheel »
Work Saturdays, Huh? How UPS Drivers Resisted by Complying »