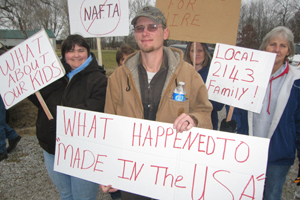 Philips Electronics took $7 million in federal stimulus money and $5 million more from county leaders in Sparta, Tennessee, promising to expand a light fixture plant. But the plant became one of 106 in the area to close in the last decade, costing 9,000 jobs. Photo: IBEW.

Bo McCurry’s union tried everything. Wage cuts that dropped pay to $12 an hour. Higher health insurance costs. Letting the company bring in an automated assembly line and a “lean manufacturing” program that pumped out product 98 percent on time. Quietly putting up with the ankle spurs and carpal tunnel produced by that management-by-stress system.

Everything to keep the Philips light-fixture plant open in Sparta, Tennessee.

But none of it was good enough for the Netherlands-based multinational. HR executives showed up unannounced last November to say they’d lock the gate in June 2012.

“They’re a cruel bunch of people,” said McCurry, president of the 150-member Electrical Workers (IBEW) local at the plant. “We bent over backwards.”

Management has already started shipping presses to a new facility in Monterrey, Mexico. IBEW rep Brent Hall says the union estimates labor cost per unit for the fluorescent-light fixtures is $3 in Tennessee and $1 in Mexico.

But corporations don’t close plants in places like Sparta just to cave in the wage floor, says Robert Scott of the Economic Policy Institute (EPI).

Companies continue to shift production to Mexico to take advantage of the investor protections afforded by NAFTA (which are similar to those in the trade deals President Obama is pushing with Colombia, Korea, and Panama).

NAFTA stripped away Mexican laws requiring companies to use local products and hire local managers, and allows companies to sue if any new government regulations hinder their profit-making.

“All of this has made Mexico a much more attractive place for U.S. companies to invest,” Scott said.

EPI reported in May that the U.S. trade deficit with Mexico that followed NAFTA’s passage in 1994 has displaced 682,000 jobs in the U.S., and that Tennessee—despite its low wages and hostility to unions—has been one of the hardest-hit states.

IBEW says the factory is one of 106 in Sparta and neighboring counties to close in the last decade, costing the state 9,000 jobs.

Philips is a serial offender: it’s closed three other lighting plants in the U.S. since 2008. Even more galling, McCurry said, is how Philips took taxpayers for a ride while it was destroying jobs.

“We’re paying them to take these jobs out of here,” McCurry said.

Union members have buttonholed legislators, put together a petition drive, and appealed for help from worker-rights groups in the U.S. and abroad. They’ve rallied outside the plant and at the state Capitol, and assembled a small team that will drive to any event within 500 miles where they’ll get a hearing.

McCurry doesn’t expect much from lawmakers. “They’re good to your face, but they forget the minute you leave,” he said.

The plant manager and a trucking firm that ships the Sparta light fixtures got bank backing for a $30 million bid to buy the plant and run it locally. Philips turned the offer down without explanation.

Workers are retiring in waves. Almost half will leave in June. The rest will get three months of health care and a severance worth $350 per year of service.

McCurry worries about the younger members. Where are they going to go? Wal-Mart? Back to the farm? “There’s no money in that,” he said.

Learn more about the campaign at tellphilips.com and join its Facebook page to get involved and stay updated.