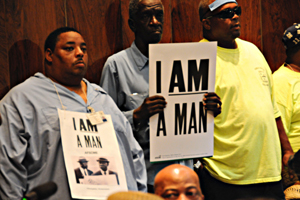 Forty-three years after the sanitation strike that Martin Luther King was assassinated while supporting, placards declaring “I AM A MAN” reappeared in Memphis. The union King backed has found its jobs on the brink of privatization.

The plight of Memphis sanitation workers is still an emotional issue four decades after the strike, which was sparked by the death of two workers due to a faulty trash compactor. The strike developed into a rallying point for the African-American community in their struggle against the city’s white establishment.

Racial overtones surfaced again in the privatization fight, which appeared suddenly last month. One councilman dismissed the 1968 struggle as belonging to another era. Another said privatization represented the next step of “change” for which King—and President Obama—fought, a suggestion that horrified civil-rights veterans.

The city faces a $60 million budget shortfall and council members are selling the privatization proposal with claims it could save about $18 million a year. Local media support the bid uncritically.

At the council meeting, a Firefighters official called for the city to restore a property tax worth $20 million a year, which was eliminated three years ago. He accused white council members of looking out for their gated communities and not the city as a whole.

The city is also considering deep cuts to disability and retirement benefits, decreased funding to fire and police departments, a moratorium on the living wage for city contractors, and the elimination of funding to city workers’ education programs.

Michael Williams of the Police Officers Association linked the situation in Memphis to “an attack on labor unions all across the nation.”

Unions rallied nationwide April 4 to honor Dr. King’s sacrifice and make plain that the struggle for rights and dignity that he died supporting is still very much alive among public workers.

Memphis unions have formed a coalition to resist the cuts, and have maintained unity despite the city’s attempts to buy off individual unions with reduced cuts.

They’ve produced pro-labor YouTube videos, distributed fliers, picketed together, and cooked for each other. Council members have been enraged by videos questioning their decisions, posted to TennesseeLaborCoverage.com, a blog created by local labor activists.

The sanitation union’s significance is not lost on current workers, one in five of whom was involved in the 1968 strike but is unable to retire due to lack of a pension.

A council member has proposed buying out the older workers with a $75,000 lump sum.

Sanitation workers say privatization won’t necessarily save money: cost overruns combined with the cost of contract monitoring and administration often make it more expensive than in-house services. According to a 2007 survey by the International City/County Management Association, more than one in five local governments has brought previously outsourced services back in house.

In most cases insufficient cost savings were cited as a primary reason. And where contracting out does produce savings, they typically come from lower wages and benefits for workers—not the supposed inherent superiority of private contractors. Sanitation workers currently make $14.50 to $27 an hour.

The council delayed a decision on privatization for two weeks in an attempt to force a union compromise, leaving sanitation workers and their supporters to continue a struggle they’ve carried on for four decades.

A version of this article appeared in Labor Notes #388, July 2011. Don't miss an issue, subscribe today.
Related
Viewpoint: Don’t Count on New York Unions to Stop the Cuts »
Another Look at the VA, in the Midst of a Pandemic »
Plexiglas and Union Power »
South and Southeast Asian Workers Grapple with Management, Government, Coronavirus »
West Virginia Strikes Again, Defeating Privatization Bill in a Single Day »