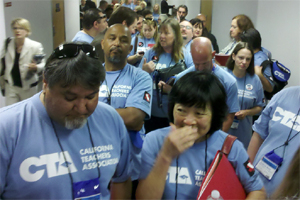 The California Teachers Association declared a state of emergency and launched statewide rallies and lobbying to dramatize the threat to schools and public services posed by the state’s deep budget crisis. A no-business-as-usual action led to 27 arrests. Photo: Alice Mercer.

The California Teachers Association declared a state of emergency and launched statewide actions May 9-13 to dramatize the threat to schools and public services posed by the state’s deep budget crisis.

The heart of the activity was in Sacramento, the state capital. Along with 250 fellow teachers, I took the entire week off to lobby and demonstrate—during the middle of state testing for most California schools. Many of us went on union release time, with CTA spending $1 million to pay for substitute teachers.
For teachers to leave their classrooms at this time of the semester wasn’t easy, and it showed how committed we were.

On our first day, dozens of Cal State University students launched an occupation of the Capitol building at closing time, and 65 were arrested, with several teachers who joined them in solidarity. CTA would carry out its own no-business-as-usual action later in the week.

NOT CONDUCIVE TO LEARNING

CTA’s call to action, which came at the initiative of rank-and-file delegates at the statewide council in early April, comes after three tough recessionary budget years in which 40,000 California educators and support personnel have been cut.

Class sizes have ballooned to as much as 34 in elementary and 40 in secondary schools. This is not just a case of “poor working conditions” for us as adults: it’s neither safe nor conducive to learning for children. The cuts came after educators, like most public workers, had already given concessions in the form of pay cuts and furlough days.

This year, with federal stimulus money no longer filling the budget gap, things were going to be worse. Thousands of teachers received layoff notices already this spring.

Brown has proposed a five-year extension of a temporary increase in income and sales taxes, as well as vehicle license fees, that otherwise will expire June 30. His proposal would address most of the deficit.

But taxes are difficult to pass in California, requiring either a two-thirds vote of the legislature or a voter referendum. Brown insists that voters must make the decision. But before a referendum, Brown wants legislators to approve, to make it legally bulletproof.

Four Republicans—two from each legislative house—need to endorse the compromise. But not one has been willing to make the leap, despite weeks of lobbying by Brown, Democratic legislators, public employee unions, and advocates for health and other public services.

The state budget is being held hostage by a legislative minority who seem dedicated to dismantling schools and public services, and are unwilling even to allow voters to make the final call. A statewide poll in April found 61 percent of voters support Brown’s proposal for temporary tax increases to avoid deep spending cuts.

While teachers from CTA’s 1,100 local associations led the state-of-emergency week, we were not alone. Our sister union, the California Federation of Teachers, joined us.

On May 12 our chanting, singing, and “drill teams” outside Republican legislators’ offices were considered “disruptive,” and security asked us to leave.

That evening, a smaller contingent took direct action, sitting down in the halls outside Republican offices. This resulted in 27 arrests, including CTA President David Sanchez.

“It’s so sad that teachers have to go this far to get the attention of some lawmakers,” he said.

I went to Sacramento as a supporter of the Teachers' "state of emergency" action and was arrested along with college students and teachers in the sit-in at the Capitol on Monday the 9th. What happened that day was a classic demonstration of what is wrong with the leadership of the mainstream of the labor movement.

California Teachers Association leaders refused to support the demonstrators and even told their own members to leave the area.

Although member pressure had forced the CTA leadership to call for militant action and to extend their demands to include real solutions—namely, tax the rich and the corporations—leaders systematically undermined the very people who had mobilized in their defense.

This contrasted greatly with the courageous actions by the leadership of the Oakland local and by activists in the San Francisco local. For a description of just what happened, see Jack Gerson's article.