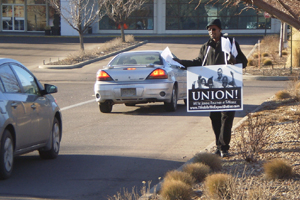 CWA has tried without success since 2006 to make inroads at T-Mobile. So when AT&T’s bid for the company surfaced in March, CWA applauded. AT&T’s CEO said T-Mobile’s roughly 24,000 union-eligible workers would fall under the neutrality agreement that’s allowed CWA to organize 19,000 AT&T wireless workers since 2005.

Consumer advocates groaned, however, saying the merger will drive up prices. Consumers Union noted that AT&T’s plans cost $15 to $50 more a month than T-Mobile’s.

James McCoy, a call center worker in Oakland, Maine, said managers allowed his organizing committee to leaflet at the door. Some units have majorities and could file for Labor Board elections in coming weeks, a test to see if T-Mobile’s relentless anti-unionism has changed.

Talk of job and benefit losses in the impending merger is speeding the union.

“People are scared to let the same managers who make them choose between their families and their jobs make decisions for them,” McCoy said. T-Mobile forces workers to bid on new shifts every six months, causing havoc in family life, and offers skimpy leave time.

Since 2008 CWA’s T-Mobile campaign had relied largely on a corporate “leverage” strategy that enlisted the telecom union on the German-owned company’s home soil, ver.di. The campaign pressured investors and politicians on both continents, aiming to embarrass the company, which respects unions in Germany but fights them constantly in the U.S.

CWA and ver.di formed “TU,” a joint union for wireless workers in both countries. The unions vowed to fight for neutrality in organizing, sit in each other’s negotiations, trade information, and prevent management from whipsawing workers across national borders, Daley said.

But T-Mobile workers didn’t jump to join. Organizers hand-billed T-Mobile workers outside parking lots and retail stores sporadically, but found little response among a workforce cowed by management intimidation and weakened by high turnover, which reaches 70 percent a year in call centers.

“Management was sly about it,” McCoy said. “When CWA showed up, they’d have donuts and hot chocolate waiting for us.”

It wasn’t all sugar. Organizer Pam Tronsor said managers made threats to fire workers, security guards videotaped them and yelled at them not to slow down as they entered the parking lot, and police were called to evict union organizers—who included, one day in Virginia, the head of ver.di’s wireless division, causing a stir back in Germany.

Committees of T-Mobile workers sputtered out and the union shifted resources to the corporate campaign. “We don’t have thousands of organizers to deploy,” Daley said.

Don Trementozzi, president of CWA Local 1400 in New England, begs to differ. He’s running for secretary-treasurer, the No. 2 spot in the union, and says the national union seems to have forgotten that some of its best organizers are in the ranks of strong locals.

Trementozzi points to his local’s successful organizing campaigns at a 50-member FairPoint telecom unit and among 100 AT&T Mobility retail store workers, both led by a rank-and-file team.

“CWA has the resources, but they spend it on the wrong priorities,” he said, noting that some sectors of the broad union, which represents everyone from journalists and flight attendants to GE factory workers and childcare workers, are now so shrunken that they’re smaller than large locals. The union’s lost 55,000 members since 2007.

Finding existing members energized enough to go out and spread the union gospel among unorganized workers gets harder, he says, when the union neglects its existing contracts.

Trementozzi’s campaign is finding support among local leaders like Anetra Session, president of Local 6327 in Kansas City, Missouri, who blames incumbent Annie Hill for uncoordinated bargaining with AT&T in 2009. The resulting contracts escalated health care costs for members and retirees—and left Session’s region on a different contract cycle, breaking the union’s ability to bargain as one.

East Coast workers at Verizon worry the national union has been slow to prepare members for this summer’s negotiations, too, and isn’t readying them for a stand-off over health care costs. That’s prompted Trementozzi and sympathetic locals to host two strategy sessions for local leaders and member activists.

HANDS IN THE TILL

Rumblings of dissent have caused several local officers to mount challenges for the July convention. Local presidents Rob Boelk in the Midwest and Claude Cummings in Texas are bidding for regional vice president spots.

Trementozzi is counting on heavy support in the Northeast, a crucial piece of which comes from Local 1101, the 7,000-member New York City Verizon union, where a reform team has challenged an executive board packed with retirees.

Union investigations revealed in March that top 1101 leaders had engaged in “a number of highly questionable practices involving compensation.”

A union-appointed prosecutor and financial investigator revealed that Local 1101 officers and executive board members had granted themselves $225 a week in unreceipted expenses—a total of $156,000 annually for top leaders.

Local leaders also gave themselves a 401(k) plan with a contribution equaling 15 percent of salary. The expenditures were never approved by members.

The investigators’ report criticized the “imprudent use of local funds,” noting that officers’ charges averaged more than $225 per meal and $600 per night for a hotel room during out-of-town conferences.

The national executive board installed a monitor, however, not a trustee, allowing a reform slate called Rebuild 1101 to contest the local’s November election.

With just four months before contract expiration, the challengers are reaching out to chief stewards aligned with the incumbents to present a united front against the company.

“Nobody is happy about this embarrassment,” said candidate Kevin Condy. “But the union is strong enough to sustain this.”

A version of this article appeared in Labor Notes #386, May 2011. Don't miss an issue, subscribe today.
Related
New Jersey Welfare Workers Sound the Alarm on Safety »
Inside the Alabama Amazon Union Drive: An Interview with the Lead Organizer »
Draw the Line in Permanent Marker: Three Organizing Principles »
Don't Guess What's on Your Co-Workers' Minds: Allow Yourself to Be Surprised »
After Seven-Year Battle, Massachusetts Comcast Techs Win First Contract »