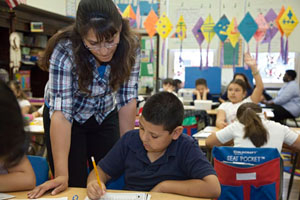 Detroit is now a trendsetter in the dismantling of public schools and stripping of teachers’ union rights.

The school district’s emergency manager Robert Bobb announced in late March that 45 academically struggling schools, or roughly one-third of the district, would be bid out to private charter operators. Eight other schools are closing, and dozens more will be closed or privatized in the coming year. The district cites a $327 million deficit and a declining student population.

Bobb dropped another bomb last Friday, issuing 5,466 layoff notices—one for every teacher and staff member in the district. The notices do not constitute final layoff decisions, and many teachers may ultimately keep their jobs. But union contract language providing that teachers be recalled in seniority order may soon be dropped.

A new state law would vastly expand the powers of emergency managers, who are appointed by the governor to oversee local governments and school districts in bad financial shape. The managers can cancel or renegotiate union contracts, sell public assets, and privatize public services.

Bobb has already hinted his intentions to make unilateral changes in the teachers’ contract,
which the new law would allow when a “meet and confer” period ends May 17. Steve Conn, a 25-year math teacher, predicts that Bobb will go after seniority rights, while attempting pay and benefit cuts as well. Effectively, Bobb wants to pick and choose who stays and who goes, and under what terms and conditions, says Conn, runner-up in last year’s vote for Detroit Federation of Teachers president.

DFT has not organized a response as yet. But at Catherine Ferguson Academy, a nationally recognized school serving pregnant teens and young mothers, students occupied their school April 15 after learning it was slated to close this year.

Eight students and five supporters sat in, while students, teachers, and community supporters rallied in front of the school, reports Nicole Conaway, a science teacher who participated in the occupation. The occupiers were removed by police and ticketed for trespassing.

In 2009, Robert Bobb was appointed by then-Gov. Jennifer Granholm as an emergency financial manager for Detroit Public Schools, making him one of four such officials around the state tasked with pulling underwater school districts out of debt.

Bobb won the confidence of much of the community early on by uncovering and eliminating fraud and waste. But when he turned to more drastic solutions, such as closing schools and revising teacher pay and benefits, many objected to his downsizing plans—which were accompanied by an invitation to charter schools to set up shop in-district. Students and parents launched protests against what they saw as dictatorial curriculum reforms, and the school board sued Bobb for allegedly overstepping his authority.

Johnson said the DFT has not been inflexible. In 2009, the union negotiated an overhaul of the teacher evaluation system, instituting peer assistance and review and collaborative decision-making.

Those reforms point to the larger project Bobb has undertaken in the district -- one that resembles Secretary of Education Arne Duncan’s plan for education reform on a national scale. In addition to seniority rights for teachers, the debate in Detroit hinges on the question of how school systems should be run.

Detroit is significant not only for the number of teachers being laid off, but also the number of schools closing. Steve Wasko, the Detroit Public Schools spokesman, said 32 schools are on the evaluation list for closure next year. Detroit is also noted for its aggressive charter school program, a major plank of the “Excellent Schools Initiative” that Bobb helped design.

“Detroit has been the talk of the town in terms of the charter school community across the nation, and the school reform community,” Wasko said.

Some 70 charter operators interested in opening schools in Detroit met with Bobb on Thursday—the same day the teacher layoffs were announced.

AFT Michigan’s David Hecker aligned the push for charters with the attack on the teachers’ contract.

"There’s no question that when the charter movement started, a big piece of it was to try to avoid unionization,” Hecker said. “It isn’t just the financial piece of it,” he added, “a big part of the movement was always to try to avoid having to work with staff in a collaborative way through collective bargaining.”

Related
Every Union Contract Right Now Should Be the Best Ever »
Undaunted by Fines, Massachusetts Teachers Defy Strike Ban »
Viewpoint: Support Veterans by Defending, Not Defunding, Public Sector Jobs at the Post Office and the V.A. »
Seattle Teachers End Week-Long Strike »
How Educators in Brookline, Massachusetts, Won an Illegal Strike »

The authors of these articles need to talk to the members of By Any Means Necessary (BAMN) and other independent unionists, not the current union leaders. Keith Johnson and Dave Hecker are responsible for collaboration with Robert Bobb, the EFM, and a total lack of militant reponse from DFT to this unprecedented attack. WIth Hecker's aid, Johnson STOLE the last DFT election from Steve Conn, who was voted in, but Johnson refused to hold a new election despite the membership's vote for one. I am NOT a member of BAMN, but a reporter and currently publisher of the Voice of Detroit at http://voiceofdetroit.net. I covered DPS issues for the Michigan Citizen for 10 years. I just covered the huge Lansing rally April 13 which was attended by virtually every union under the sun, but I saw NO evidence of Hecker or Johnson at the rally (or for that matter, the "liberal" UAW Pres. Bob King) , although their members came independently (DFT AND UAW). Herbert Sanders, AFSCME International Rep., spoke on behalf of AFSCME (Council 25 initiated the call for the rally), and threatened to SHUT THE STATE DOWN! if recalls, etc. do not work. See article in Voice of Detroit on the rally. At least Janna Garrison, when she was president of DFT in 2001, called DFT members out on a one-day strike to travel to Lansing to stop Rep. Kwame Kilpatrick's charter bill, and it was STOPPED! Quit interviewing sell-outs.