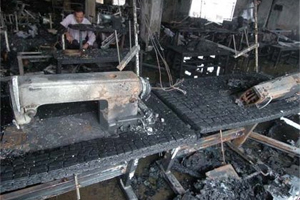 A fire at a Bangladeshi supplier to The Gap killed 28 garment workers; this is the aftermath. Most exits were locked. Photo: www.cleanclothes.org.

As workers were preparing to go home late in the afternoon of March 25, 1911, fire struck the Triangle Shirtwaist Factory in New York City. The bosses had locked the doors to keep the workers inside. Fire ladders did not reach the upper floors that housed the factory.

Within 18 minutes, 146 immigrant workers—mostly Jewish and Italian women—were dead. Many of them, just teenagers, jumped to the street below rather than be burned alive.

Twenty years ago, 25 workers, mostly African American women, died in a fire at a chicken processing plant in Hamlet, North Carolina. Again, fire doors were locked from the outside.

And just three months ago, 28 garment workers at the That’s It! Sportswear factory in Bangladesh were burned alive, trampled to death, or killed after jumping from a fire at the facility, in which most exits were locked. Authorities said the fire broke out on the 10th floor and spread to the 11th. Witnesses saw 50 to 60 people jumping off the 10th floor to escape the flames and smoke.

A hundred or more were seriously injured. The factory’s customers include The Gap, Target, Kohl’s, Sears, and Abercrombie and Fitch. A representative of The Gap said the company was “terribly saddened.”

The Triangle tragedy was one of the worst industrial disasters in U.S. history and it galvanized popular support for workplace safety. More than 100,000 mourners marched through the streets of New York, with another 250,000 lining the sidewalks. The horror of what had happened at Triangle helped build the modern American labor movement.

The Factory Investigating Commission of New York State was formed to probe the causes of the fire. The Commission, which included Samuel Gompers of the American Federation of Labor and Mary Dreier of the Women’s Trade Union League, was responsible for more than 25 laws governing workplace safety, abolishing child labor, limiting working hours, and creating other reforms.

While great progress was made, the Hamlet fire illustrates how factory owners continued to find loopholes and to ignore the law. The deaths of West Virginia miners and Gulf oil rig workers last year only reinforced how companies brazenly flout safety rules.

Yet today, Representative Darrell Issa is promoting hearings and legislation to gut OSHA, soliciting from manufacturers which “burdensome” regulations they’d like to do away with.

The New York garment factories of 100 years ago have mostly fled abroad, where pay and conditions are even lower and laxer than in the U.S. South. Bangladesh has about 4,000 garment factories now, employing nearly 3.4 million workers, mostly women and children.

They export nearly $10 billion worth of products a year, mainly to the United States and Europe. They face conditions New York’s garment workers of the last century would recognize: Between 2006 and 2009, 414 workers died in 213 factory fires. Last year 21 workers died in a sweater factory, trapped by blocked exits piled high with flammable materials.

Clearly, much has changed about the global economy since the Triangle fire. But despite the great power of multinationals to send contract work scurrying around the globe, garment workers in Bangladesh are doing exactly what New York’s garment workers did—organizing and demanding rights.

Groups like the National Garment Workers Federation (NGWF) are engaging workers to demand a new minimum wage. The garment workers have clashed with police in recent months leaving up to four people dead and 100 hurt. Smaller protests have taken place around Dhaka, where workers in the capital blocked a busy road.

Their struggle isn’t limited by national borders. Bangladeshi garment workers are working with groups like the International Labor Rights Forum, the Worker Rights Consortium, and the Clean Clothes Campaign to pressure multinationals at every point along their supply chain. These days everyone knows they can’t win alone.

“We reject efforts by governments and business groups to split the working class, either by distinguishing between public sector and private sector, or American, foreign, or immigrant workers,” said Amirul Haque Amin, NGWF’s president.

As today’s garment workers continue to fight for workplaces they can survive, groups across the nation are remembering the Triangle Fire and its aftermath, with marches, rallies, art exhibits, and performances. These commemorations help connect the battles of the past with today’s struggles by workers, immigrants, and women.

Andy Griggs is coordinator of the LA Laborfest and retired from United Teachers Los Angeles.

SweatFree Communities is sponsoring a speaking tour featuring a Wal-Mart retail worker, a warehouse worker, and a Bangladeshi garment worker. They will be in New York City today and tomorrow and in Chicago, Boston, New York, Philadelphia, and Washington, D.C. March 27-April 6.

See footage of Bangladeshi garment workers organizing as Charles Kernaghan of the Institute for Global Labor and Human Rights describes the Triangle fire and its echoes today. Watch video here.