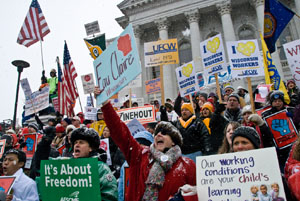 Madison hosted its largest demonstration yet Saturday, and Ohio and Indiana unionists are keeping the heat on as well. Photo: Sue Ruggles.

Though their numbers aren’t as large as those in Wisconsin, unionists in Ohio and Indiana are keeping up remarkable pressure on their legislatures with repeat crowds of 1,000, 10,000, and even 20,000 today in Ohio.

Meanwhile in Wisconsin, after the largest rally yet seen on Saturday, unionists fought for their right to be inside the Capitol (see below).

Ohioans rallied from 10 a.m. to 5 p.m. in Columbus today, trying to block SB5, a bill that would end collective bargaining rights for state employees and a host of other noxious legislation. Crowd size was estimated at 15,000 to 20,000 and “the crowd always gets a lot bigger as soon as school lets out,” said Nick Perry, a UPS Teamster who was enjoying both the crowd’s rendition of “Solidarity Forever” and the Street Dogs, a punk band. “In the next three hours it could get much bigger,” Perry said at 3 p.m. See video here.

Unions and allies will rally again Wednesday, as a vote nears on SB5.

Besides buses filled with union members—Perry said at least 400 Teamsters were in the crowd—the noisy crowd welcomed faith leaders, students from Ohio State, and veterans.

Department of Transportation worker Willa O’Neill, from the small town of Marietta in southeast Ohio, said, “Our managers are also against this bill but they’re afraid to come out and say anything for fear of reprisal.” She said two buses came from Marietta. When she took a vacation day for the rally, “my managers knew where I was going and totally approved of it.”

O’Neill has more than 30 years of service, having hired in just as her department was beginning its first union contract. “I heard stories from those who’d been here before, how merit pay at that time was for those that coughed up money for the controlling party,” she said. “I really don't want that to happen again.”

A bill in Ohio’s House would allow employers to exchange overtime pay for comp time, opening the door to wage theft. Attacks on the prevailing wage and “project labor agreements” for construction workers are also on the table, as well as privatization of prisons, the Ohio Turnpike, and the job development agency. “Pensions are on the chopping block,” said AFL-CIO staffer Andy Richards. “The pension ‘reforms’ for teachers, police, and firefighters are egregious.”

Although the crowds haven’t occupied the Capitol as in Wisconsin, they are showing willingness to keep coming back, as long as it takes. Committee hearings are being broadcast outside to the crowds. Perry said that one legislator “reminded speakers to keep their testimony short so we won’t be here all night. A fireman said, ‘It’s normal for me to work 24 hours a day. I’m good for the whole night.’ That got a big cheer.”

Richards said the demonstrations in Columbus of the last two weeks are “laying the groundwork for a movement against budget cuts that will affect tons and tons of people.” Governor John Kasich’s budget is due March 15, and unions are bracing for “some pretty nasty stuff,” including repeal of the estate tax and more tax breaks for corporations.

O’Neill said they’d heard there were 100 pages of amendments being offered to Kasich’s 476-page bill. “They can’t amend it to make it acceptable to us,” she said.

Right to Work and More Draws Crowds in Indiana

While union press releases announced the death of a right-to-work bill in Indiana, activists at the Capitol are wary of declaring victory too soon. “The bill number may be dead, but the issues are still very alive,” said David Williams of the Laborers.

A thousand rallied inside the crowded statehouse in Indianapolis Monday while House Democrats continued their exile in Illinois, listing 11 anti-worker bills they want dropped before they are willing to return and provide a quorum.

Brett Voorhies, a Steelworkers legislative director, said he’d seen this pattern already. Before the protests started, on February 15, labor was told the right-to-work bill was dead, but it was introduced anyway two days later, which “triggered everything”: massive protests.

Protests started Monday, February 21, and continued all week, drawing as many as 10,000 a day last Wednesday and Thursday. Demonstrators plan to keep up the pressure, and unions have scheduled buses to travel to Indianapolis all this week from northern Indiana, a union stronghold. Labor is planning a larger mobilization for March 10.

“I’d like to see us follow in Wisconsin’s footsteps,” said Williams. But according to workers inside the Capitol, police are adding restrictions, dictating times music can be played, for example. Unlike in Wisconsin, police haven’t allowed anyone to stay overnight.

The AFL-CIO is also shortening the hours of protests, focusing on mid-day, in contrast to last week, when protesters spent long days in the Capitol, only leaving at 9 p.m. when the building closed. When voices have been raised to try civil disobedience, one source said, AFL-CIO leaders “frowned on that.” It’s not clear what a successful escalation would look like.

No more legislation has been able to move in the absence of House Democrats. But during the protests, Governor Mitch Daniels signed a bill to cut unemployment benefits by 25 percent. “It was kind of in your eye,” said Voorhies.

Daniels, a Republican, has not pushed the right-to-work measure, saying it was brought up at the wrong time. He bemoaned the distraction from his other agenda items, such as curtailing collective bargaining for teachers, adding charter schools, and expanding school vouchers for private schools. The House Democrats are refusing to return as long as those bills are under consideration.

Voorhies said the Steelworkers were strong on defending the teachers: “One, it’s our kids. Two, we have so many members, someone in our family is a teacher or we’re married to a teacher. And then it’s a solidarity thing, an injury to one is injury to all.” Herb Anderson, a Steelworker who traveled to the protests Thursday, said the voucher bill is “just going to dilute the money that’s there for education.”

“Even if we defeat right to work,” said Sal Aguilar, assistant director of Steelworkers District 7, “we’ve gotta defeat the bill they’ve got against the teachers, then there’s a bill to hurt the trades.” He said there’s also a bill to prevent localities from setting higher minimum wages. “This is getting out of hand.”

“They woke a sleeping giant, it’s not just about right-to-work anymore,” said Voorhies. “We’ve started a fight and we’re going to continue fighting for as long as we have to.”

In Wisconsin, more than 100,000 massed in the capital for a weekend rally, as Capitol police declined to enforce an order Sunday to clear the building of protesters.

State police stepped in, and the Department of Administration, an executive branch division answerable to Governor Scott Walker, began restricting access to the building instead. Protesters were told they could leave to move their cars, but when they returned the doors were closed. They didn’t reopen Monday.

Police began sealing windows in the Capitol to prevent supplies from reaching protesters inside. Demonstrators’ numbers have dwindled to around 100.

AFSCME Council 24 and the state teachers union WEAC sued to overturn the restrictions on access to the Capitol, winning a temporary injunction. The matter went back before another judge Tuesday afternoon, with the unions seeking to permanently re-open the statehouse.

The Department of Administration argued it’s complying with the letter of the ruling by letting one demonstrator in for every one who leaves. Police demand identification at Capitol doors and prevent visitors from entering unless they have an appointment with their own legislator.

Observers say the courthouse where the hearing is taking place has a circus-like atmosphere, with the judge asking state lawyers if they possess an omniscience that gives them insight into the Capitol’s workings—followed by jeers from the hundred or so in the overflow room.

“If the judge rules in the unions’ favor, it legitimizes the view that the governor is out of control,” said Andrew Sernatinger, a baker in Madison and active protester.

Union leaders predict the pressure on Walker will grow when he releases his budget proposal today, expected to include $1 billion in cuts to education and local government.

“It will be vicious and draconian,” said Dave Poklinkoski of the IBEW. “There will be a reaction, and it will broaden the base of support.”

Wisconsin unionists don’t see the Capitol occupation as crucial to their strategy to roll back the governor’s attacks on workers, but recognize the powerful symbolism of rollicking dissent filling the grand rotunda.

Firefighters, meanwhile, broke through the police blockade Tuesday afternoon, as 20 marched into the Capitol in their full gear, led by bagpipers.

Thousands are still massing outside the statehouse, testifying on a microphone set up by the Bricklayers. The anger of participants grew as they remained shut out of the statehouse.