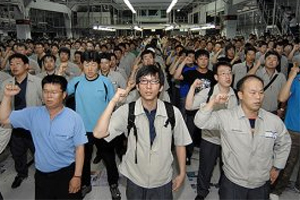 During their 2007 strikes against the U.S.-Korea Free Trade Agreement, Korean workers held a rally at the Hyundai Motors factory in Ulsan. Now, temp workers are occupying the plant. Photo: Korean Metal Workers Union.

President Obama finalized the largest trade deal since NAFTA on Friday. It looks like he cut and pasted the same corporate-friendly script he inherited from previous administrations, Democrat and Republican alike.

In doing so he turned his back on labor and broke commitments he gave to union presidents in the weeks before the Korea trade deal was announced Friday.

Sources inside union headquarters tell Labor Notes that Obama met with AFL-CIO President Rich Trumka, Steelworkers President Leo Gerard, and Communications Workers President Larry Cohen in November, and promised that worker and environmental protections would be included in a deal with South Korea.

The eventual agreement contains none of those provisions—which U.S. unions have insisted must be the bedrock of a new, more humane trade policy. (Obama the candidate mouthed the same words).

But the agreement does have the approval of Bob King, president of the United Auto Workers, who shocked fellow officers—not to mention thousands of members who have agitated against corporate-backed trade rules—by supporting the deal almost immediately.

Reports say the deal would allow U.S. auto sales annually in Korea to rise from less than 10,000 now to eventually as high as 75,000, which could translate into about 1,110 full-time auto jobs (though not all of those would be union jobs or jobs in the U.S.).

The Public Citizen watchdog group is pointing out that “rule of origin” provisions that the UAW previously criticized did not improve. The rules require that a vehicle’s parts only have to be 35 percent U.S. or Korean to escape duty charges at the respective borders. Setting the bar that low gives auto companies in both countries a further prod to send work to low-wage Mexican and Chinese factories, because if they keep it under 65 percent of the car, it still counts as “U.S.-” or “Korean-made.”

Its impact on Korean workers will be severe, too. The Korean Metal Workers Union held five days of strikes over the free-trade agreement in 2007, calling out 110,000 members and declaring that everyone is affected by trade rules that encourage the slicing and dicing of jobs into part-time, contracted, precarious work.

NAFTA-style trade deals, like the one negotiated with South Korea, give multinational corporations rights to sue a national government if the government takes an action that reduces corporate profits. These suits can be used to undermine worker protections, environmental regulations, and safety standards.

Korean unions are already fighting lax labor laws that let employers hire cheaper, non-union temporary workers to replace permanent ones. Close to two-thirds of the entire Korean workforce doesn’t have regular employment status. (See this study for more on that.)

As the trade agreement was being finalized, temp workers were occupying Hyundai’s plant in Ulsan. Still going strong after three weeks, they’re demanding they get regular jobs instead of short-term contracts.

WHY’D KING DO IT?

Perhaps Bob King was won over by some idea—or promise—that by supporting the deal he would ease the organizing of Korean-owned auto plants in the U.S. They’re an ever-larger force in the industry and all non-union: estimated output from Kia and Hyundai plants in the U.S. is 450,000 vehicles per year.

King’s made clear those companies are in the union’s sights: he and new organizing chief Richard Bensinger held a rally outside the Hyundai-Kia tech center in metro Detroit Monday and said they would soon propose to automakers rules to govern union organizing drives and elections.

UAW sources suggest King felt he had to back the trade deal as payback to Obama for pumping billions into failing automakers in 2009—although the bailout of Chrysler and GM laid off tens of thousands of workers and cut pay—in half—for future auto workers.

There was little understanding why King would go out on his own on such a key issue to labor. He told In These Times it was important to stay “relevant.”

“This is an about-face for the UAW and is flying in the face of the AFL-CIO,” one UAW official said. “A resolution passed at our last convention calling for fundamental changes to the Korea deal, and it didn’t happen. King just went ahead and approved it. It’s a hell of a thing to do, forsaking everybody’s interest for your own.”

Local leaders were taken off guard by King’s backing for the pact.

Joe Cardona is second VP of Local 174 near Detroit, which has a history of actively opposing free trade agreements. Cardona was surprised by King’s support and said, “There’s not a lot of happy people around here,” but, citing King’s commitment to solidarity with workers in other countries, added, “Sometimes you gotta go down a road you're not used to going down and I hope it’s where we need to be.”

On the question whether King’s stance was quid pro quo for the bailout, he said, “I’m curious as to what was said to our organization when we were on the edge of the cliff.”

MORE THAN CARS AT STAKE

The AFL-CIO, USW, CWA and Machinists announced their opposition to the deal Thursday. The United Electrical Workers (UE) came out against the deal Friday. The UFCW meanwhile put out a statement praising the “over 20,000” jobs it would create in exporting U.S. meat.

"Our current economic climate simply cannot support a trade agreement that does not address U.S. workers' rights and will cost more U.S. jobs. Further, the Korean union movement strongly opposes the agreement," the CWA pointed out.

In its statement released Friday, the UE lashed out at the administration's trade reps for undermining standards. "One of the purported accomplishments of the US negotiators is to have forced Korea to actually lower environmental and safety standards," it said.

The Machinists were vociferously opposed.

"The current deal falls woefully short of addressing fundamental objections that have been repeatedly
raised by the IAM," the union said. "It is our firm belief that the last thing U.S. workers and our nation’s economy needs is another flawed trade agreement built on the disastrous framework of NAFTA."

My thoughts on the Korea FTA keep going back to the Aveo. The Aveo is currently imported from S. Korea. I have always thought it kind of odd that back in ‘09 the Obama administration was pushing to bring a small Korean car to a US Assembly plant.

As an assembly line worker I wonder if I am now forced to compete with Korean labor costs. As a part-time Econ major at UM-Flint, I know this to be the case. I know from my studies that these FTA's are attempts by our government to build trade alliances to compete with the EU, BRIC, and ASEAN. But isn't S. Korea already part of ASEAN? And haven't BRIC and the EU been utter economic failures? When will the day come that we will have to bail out Korea, Mexico, or Columbia, like Europe is currently doing for Greece and Ireland?

S. Korea's Daewoo was able to produce the Aveo profitably because of a slave level wage structure. While I know protectionism is bad for the economy, this deal does not create more competition among firms. It only creates competition among workers, which in the long run drives down purchasing power and standards of living.

S. Korea's economy is run by a mafia like organization called the Diabatsu. All Obama has succeeded in doing is stabilize the Diabatsu's business structure at the expense of destabilizing the wage structure of American workers. Take Lake Orion Assembly, where they are going to be building the Aveo with 40% of the membership at half wages, as a prime example of this.

My guess is that Bob King is nodding along because he owes the Obama administration; not because it is what's best for the membership.