Fear Wins as Service Employees Fend off NUHW at Kaiser 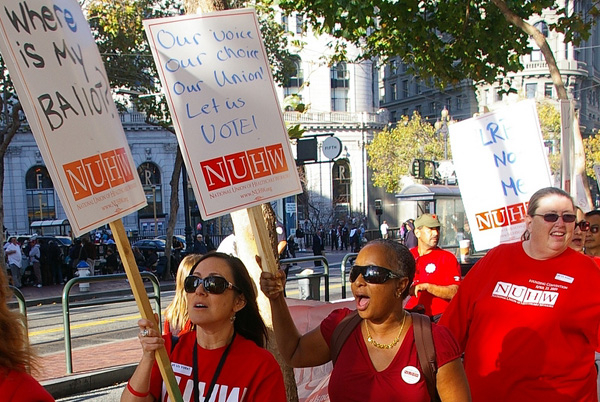 NUHW supporters at Kaiser picketed the NLRB to secure an election at Kaiser. Citing employer support for SEIU they vow to press for a re-run.

The vote concludes a months-long battle in Kaiser facilities across the state in what some are calling the most expensive union election in history. SEIU poured millions of dollars and hundreds of out-of-state staff into the effort to fend off NUHW, warning members that they were putting everything at risk if they chose to leave.

SEIU’s main message (besides calling NUHW leaders thieves) was that if workers chose NUHW, their contract would be up for renegotiation, so why rock the boat?

Kaiser eagerly played its part in SEIU’s fear campaign, illegally withholding raises for a group of Southern California professional workers who had already left SEIU for NUHW, targeting NUHW supporters for discipline or dismissal—sometimes with the active cooperation of SEIU officials—and routinely shutting down the few public spaces where NUHW supporters could campaign inside Kaiser.

While the voting procedures don’t allow for a facility-by-facility breakdown, it’s clear that where NUHW had strong worksite organization its member-to-member organizing was effective at countering the fears SEIU raised and in cutting through the blizzard of mailers and phone calls. Absent strong worksite networks, incumbency, money, and insecurity were an overpowering combination.

Because of Kaiser’s involvement—it is illegal for an employer to assist one union over another in such an election—NUHW supporters insist they could not get a fair vote, and have vowed to challenge the results in court. Activists are meeting over the weekend in Northern and Southern California to discuss next steps.

SEIU’s strong showing at Kaiser pushes NUHW members’ quest to re-assemble their former local years into the future. It remains to be seen how rank-and-file NUHW supporters at Kaiser—now destined to remain within SEIU-UHW for the time being—will contend with SEIU-UHW going forward. One huge challenge will be Kaiser’s plan to demand mid-contract health care concessions, probably next spring. Up till now, NUHW supporters at Kaiser have either been removed from their steward and other positions by SEIU-UHW, or have resigned. Will they now decide to organize within the local, though its top-down structures and staff-driven nature weigh heavily against them? The international’s trusteeship over the local is slated to end in March 2011.

SEIU’s push to lower members’ expectations and stoke insecurity won the vote, but that platform won’t build a strong union. Nor will it beat back looming concessions. Because NUHW is the only union in the picture that’s talking about building rank-and-file power to deal with hostile employers, don’t count it out.

A version of this article appeared in Labor Notes #379, October 2010. Don't miss an issue, subscribe today.
Related
Kaiser's Outrageous Two-Tier Wage Proposal May Provoke a Massive Strike »
Global Cleaning Workers Share Their Struggles as the First Line of Pandemic Defense »
Chicago Health Care Workers on Strike for Safe Staffing, $15 Minimum, PPE »
Santa Rosa Hospital Workers Strike to Defend Sick Time and Health Care in Midst of Pandemic »
Why and How SEIU Members Are Calling on Our Union to Expel Cops »

Gee, working people often vote against their self-interests. The reasons why that happens are more complicated than the level of people's intelligence. Very intelligent people often vote against their self-interest. Witness the regular political process where people vote against health care for example. As a former member of an SEIU local all I can say is good luck. The few union meetings we had were more like lectures than democratic proceedings and the union did little more than siphon some of my paycheck for monthly dues.

So "Very intelligent people often vote against their self-interest" and "The reasons why that happens are more complicated than the level of people's intelligence"?

But hey, congrats on coming up with another slam against SEIU, especially the part about siphoning off paychecks for dues. They say the same things over at RedState and Breitbart's Big Government website.

What kebsam said. Why do stories about this election in supposedly "progressive" forums all conclude, in one form or another, that the only reason that NUHW lost is because Kaiser workers are stupid?

In addition to kebsam's excellent observations, there is this: If NUHW's Sal Rosselli really did not foresee Kaiser's refusal to automatically give out those raises, he clearly lacks the collective bargaining wisdom that NUHW supporters credit him with. On the other hand, if he guessed or suspected that there was even a chance that the employer would not pay out these raises without a protracted legal battle, and if he failed to share that little detail with Kaiser workers, then he is clearly not nearly as honest as the NUHW supporters think.

For all of Brenner's supposed idolization of rank and file democracy, he sure doesn't show much respect for decisions of the actual rank and file. This election was not close. Kaiser workers spoke loud and clear by a 61% to 37% thumping in favor of sticking with SEIU-UHW and rejecting NUHW. I'm sorry they didn't follow your lead Mark Brenner, but can you give them a little credit. Clearly you don't know Kaiser workers if you think this vote was about fear. Kaiser workers didn't win the best contract in the healthcare industry by being afraid. They won it by sticking together and fighting smart. And that's just what they did in this campaign when instead of Kaiser management, it was the self entitled former leaders of their union that were attempting to divide and weaken them.

The decision that was made, resoundingly, in this election by Kaiser workers was clear. They chose to stick with the organization that has won them the best wages, benefits and job security protections in the healthcare industry. They stuck with the organization that protected those standards and improved upon them in the contract that was just negotiated, in an environment where workers all around them were being forced to take concessions if they were able to keep their jobs at all.

They made the very educated decision not to gamble what they have worked so hard to achieve with NUHW- an organization that by any standard of measurement has been a complete and utter failure. Yes Kaiser withheld raises from the professionals represented by NUHW demanding that raises be bargained through contract negotiations. Wow- what a shocker! Maybe Kaiser even committed ULPs. What a surprise! An employer acting like an employer! But what was so apparent to Kaiser workers was NUHW's complete inability to do anything about it! They couldn't even get Kaiser to one bargaining table and instead were forced to splinter their already tiny group into three smaller groups. Where is NUHW's "strong worksite organization" and "member to member organizing" and why wasn't it able to beat back Kaiser- a pretty soft employer compared to many others in the healthcare industry? The truth is it doesn't exist anywhere but on the pages of Labor Notes. NUHW has been around for almost two years now and has yet to negotiate a single contract for any worker. Kaiser workers saw this failure, compared it to the success they had achieved in SEIU-UHW and made a pretty logical choice. Why is it so hard for pundits like Brenner to accept workers sorting things out for themselves?

Another reason why workers rejected NUHW is that they don't like being lied to. Brenner's article just echos the same lies that Kaiser workers overwhelmingly didn't buy. Kaiser workers knew there would be no "mid contract healthcare concessions" because they can read their new contract where it says in black and white, "There will be no changes to benefits during the term of the agreement". NUHW's ridiculous attempt to base their campaign on things that workers could easily discover were not true led them to lose the election by a landslide. Why Brenner does the same thing with Labor Notes readers says a lot about how much he respects their intelligence.

The final reason for NUHW's devastating loss can be seen in Brenner's discussion of their "quest to reassemble THEIR former local". The entitlement displayed by Roselli and crew that they somehow owned the history, accomplishments and organization that Kaiser workers had achieved was something Kaiser workers weren't having. It's the same sense of entitlement that led them to misuse members dues, steal and destroy their grievance and bargaining files and abandon their day to day issues for over two years while they fought their personal political crusade against SEIU. Kaiser workers rejected the idea that their former leaders- rather than the unity and strength of Kaiser workers united with 2million other workers in a national organization- were responsible for all that they had achieved. Let's see if the self proclaimed spokespeople for rank and file power can learn the same lesson. Let's face it, more workers just voted for SEIU-UHW in this election than read Labor Notes in a whole year. Maybe those workers know a little something that folks like Brenner can learn from.

It's getting very old now with LN attacking SEIU as hard (if not harder) than they do anti-union employers.

I know that SEIU-bashing is practically a cottage industry now for both Labor Notes and Glenn Beck, but jeez, can you at least stop insulting the will of the workers? This wasn't even a close election. Looks like LN is putting its own ego and agenda ahead of what the workers want. Just like Sal Roselli and NUHW.

wow brenner you just got dunked on

Has the Kaiser Partnership now been roundly condemned as the basis for the Kaiser interference charge? I was just re-reading Steve Early's dispatch from just a year ago - The Kaiser Partnership, Then and Now and am looking forward to an update on this issue of "cooperation". It is indeed a sad day for the Labor Movement with the NUHW loss to SEIU, but so was the day that Sal helped form the Partnership. http://talkingunion.wordpress.com/2009/10/09/the-kaiser-partnership-then...