Another Day, Another Assault on Immigrant Workers in Arizona 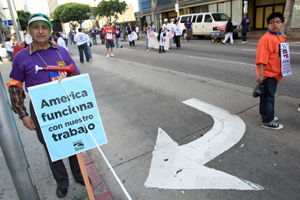 The anti-immigrant bill passed in Arizona is just the latest bomb to drop in a long-term assault on the rights of immigrants in the state. Photo: Slobodan Dimitrov.

While the rest of the nation is reeling from its first look at Arizona’s immigrant-bashing lawmaking, immigrant rights advocates here are outraged but not exactly surprised.

SB1070, the anti-immigrant bill passed in April, is just the latest bomb to drop in a long-term assault on the rights of immigrants by a state legislature led by some of the nation’s most extremist elements.

Just as the Minutemen and other vigilante groups like to dress up in fatigues and pretend they are Border Patrol agents, our state legislature engages in “vigilante lawmaking”—pretending they are the U.S. Congress and have the authority to dictate immigration policy.

They’ve been at it for years now, introducing 27 anti-immigrant bills in the 2009 session alone. Most have been sponsored by leading immigrant-basher Russell Pearce.

At the same time, federal and state executive policies openly target immigrant workers, through raids by Immigration and Customs Enforcement; law-enforcement programs that seek to prosecute every adult caught crossing the border illegally, not just those with criminal histories; and Social Security “no-match” letters that only seem to matter when workers and unions start making trouble for the boss.

The cumulative impact has left immigrants feeling besieged, confused, and extremely vulnerable. Along comes SB1070, the “show me your papers” law. SB1070 mashed together elements of previously rejected bills, prompting one advocate to refer to it as “Russell Pearce’s letter to Santa.”

Its obscure provisions are as frightening as the well-known ones. Little remarked on is the direct attack on day laborers in the bill, which makes it a crime to pick up a day laborer if the vehicle “impedes traffic.”

Another unprecedented provision awards individual citizens the right to sue local law enforcement for not prosecuting immigrants to the full extent of the law. Police departments may respond by choosing to prioritize picking up immigrants over investigating more serious crimes; they can’t be sued for not stopping a burglary.

Because the law does not take effect until July 29, and because it is just the latest in a raft of anti-immigrant policies, it is difficult to estimate its possible impact. For many immigrant families, SB1070 is just one more reason not to leave the house more than once or twice a week, not to let the kids go to school, or not to stay in Arizona.

Consider the fallout from Arizona’s harsh employer sanctions law, the nation’s toughest, under which businesses can lose their license for “knowingly” hiring undocumented workers. Before the bill even passed in 2007, stories began emerging of massive firings and unscrupulous employers taking advantage of workers’ confusion to cut pay or hours and perpetrate other abuses. Attorneys, social workers, and immigrant rights groups were deluged with reports of questionable and at times outright predatory practices by employers.

A community survey of more than 400 immigrant workers organized by the American Friends Service Committee in Tucson found incredible confusion among both workers and employers about what precisely was in the law, who it applied to, and how it was to be enforced.

This confusion led many employers to misapply the law, both intentionally and unintentionally. But most telling was the data on how the law had affected people’s everyday lives:

Initial reports are that SB1070 is having a similar impact. More immigrant families are seriously considering moving away from Arizona. Those who stay are extremely cautious, limiting their travel and keeping their kids close.

While Pearce and his ilk claim this as a victory, business leaders have fought the employer sanctions law vigorously in the courts, because of the disastrous impacts on the state economy. The loss of even more workers, shoppers, and taxpayers will be another blow to an already struggling state.

If court challenges are unsuccessful and politicians are unswayed by increasing civil disobedience and a growing boycott of the state by groups across the nation, it is likely that the law’s implementation will be highly inconsistent.

Deep divisions within law enforcement and among elected officials indicate that enforcement will vary according to location. Maricopa County, home to the notorious Sheriff Joe Arpaio, will likely use the law to the fullest extent possible, while cities like Tucson and Flagstaff will choose to apply their resources to serious crimes.

Of course, the wild card here is the ability of individuals to sue if they feel their local officials are being less than zealous.

One thing is certain, however: this will not be the last, or possibly even the worst, you hear from Arizona’s vigilante legislature. All indications are that Russell Pearce plans to reintroduce a bill that would make it illegal to accept or issue a birth certificate to a child unless one parent is a U.S. citizen, violating the 14th Amendment’s guarantee of citizenship to “all persons born or naturalized in the United States.”

A version of this article appeared in Labor Notes #376, July 2010. Don't miss an issue, subscribe today.
Related
Viewpoint: A ‘Union’ That Pushes to Deport People Is the Labor Movement's Opponent »
Work Is the Reason Latinos Are Getting Slammed So Hard by the Pandemic »
How Phoenix Educators Used the ‘Red for Ed’ Momentum to Rebuild Our Local Union »
Poultry Workers and Allies Organize in the Wake of Anti-Immigrant Raids »
Steward's Corner: How to Respond If a Member’s Work Authorization Is Challenged »