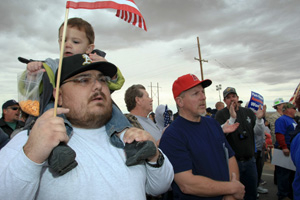 Miners in Boron, California, voted Saturday on an agreement to end their 15-week lockout. The Longshore and Warehouse Union says the pact beats back most of the demands made by Rio Tinto, the world’s fourth-largest mining company. Photo: Slobodan Dimitrov.

Locked-out borates miners in Boron, California, voted by 279 to 95 May 15 to end their 107-day lockout. The Longshore and Warehouse Union says the six-year pact beats back most of the demands made by Rio Tinto, the world’s fourth-largest mining company.

Said Kevin Martz, a shovel operator just elected to ILWU Local 30’s executive board, “I really wanted to stand up strong and not let optional union membership get into our agreement, not let seniority be eliminated from our agreement. If we gave that up we’d be giving it up for workers everywhere.” Rio Tinto had demanded the right to convert full-time jobs to part-time, gut seniority, cut pay at any time, and outsource.

The agreement calls for annual 2.5 percent raises—welcome after five years of bonuses instead of increases under the previous contract. But the deal takes a step backward on pensions: new hires will receive 401(k)s with a 4 percent company contribution instead.

Workers credited the victory to the outpouring of support from their own small town in the High Desert of Southern California and from other California unions, as well as throughout the ILWU.

“The biggest lesson we learned,” said instrumentation electrician Mike Davenport, “is that it’s not enough to be union for one day, to get the contract. You’ve got to reach out to others who’ve supported you. People were driving 100-plus miles to support us; we have to do the same.”

Four factors contributed to the win:

Rio Tinto spent thousands of dollars trying to convince the people of Boron that their neighbors were backward and greedy, but the company’s ads didn’t resonate. Workers painted their struggle as David v. Goliath: workers and families against a multinational conglomerate seeking to create “junk jobs,” a workplace without rights.

Said rank-and-filer Kim Evans, “When we first got locked out I thought there was no way in heck we would win this. But we had so many people that showed up out here in this little tiny desert town that looks like it would blow away… The Teamsters brought us $30,000 worth of groceries and then another $20,000, so we had a food bank.” Martz spoke of the help paying COBRAs, utilities, mortgages, and car payments.

“There are people all over the world that were willing to support us,” said Tami Lawrence, a quality analyst in Rio Tinto’s lab. “I’m in awe that 560 people in the middle of nowhere, these people would help.”

The Boron miners received a Troublemakers Award at the April 23-25 Labor Notes Conference.

Related
Strike Wave Rocks Britain, as Unions Confront the Cost-of-Living Crisis »
‘No Contract, No Matisse’: Philadelphia Museum of Art Workers Win First Contract After Strike »
The Right to Strike Is at Stake on the Railroads »
How Intermodal Yard Workers Doubled Their Pay »
St. Louis Boeing Plant Workers to Strike »