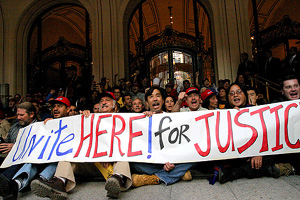 As unionists search for ways to resolve labor’s ongoing crisis, virtually ignored is the one tactic with a proven ability to produce major gains—an effective strike. After two decades of avoiding the question, it’s time to face the reality of what it will take to rebuild the labor movement.

For generations the ability to strike—and halt the employer’s production—was the essence of unionism. During the heyday of American unions, from the 1930s to the 1970s, workers secured real wage gains, pensions, and employer-paid health care through hard-nosed collective bargaining backed by workplace-based solidarity and a powerful strike.

But today unions have virtually abandoned the strike. There were only five strikes last year of 1,000 workers or more, three of them among public employees, as opposed to at least 200 major strikes per year in the 1970s.

The reason is clear. Today’s version of the strike—which is very different from the traditional strike—makes no economic sense. In a typical strike today, workers set up a picket line only to watch the scabs walk past to take their jobs.

In contrast, traditional unionism was based on commonsense economics—on the notion that a strike must make an employer’s pocketbook bleed. Merely withdrawing labor cannot work for most striking workers, since employers typically have no difficulty hiring scabs. Yet for more than two decades the idea that striking workers need to stop production has been treated as a fringe idea within the labor movement.

Labor’s other main tool was workplace-based solidarity. Whether it was expanding picket lines to an entire industry, refusing to handle scab-produced goods, or pressuring a rogue employer by choking off its supply or distribution chain, solidarity was a key union tactic.

Solidarity allowed workers to act as a class, rather than as one isolated shop at a time. These workplace-based solidarity actions were banned in the 1947 Taft-Hartley law precisely because they were so effective.

As Rich Trumka noted in the wake of the winning Pittston mine strike—which broke many laws—“The labor laws in this country are formulated for labor to lose. And if you play by every one of those rules, you lose every time.” To challenge employers successfully, unions must recover the traditional tactics of stopping production and workplace-based solidarity.

As the power of the traditional strike declined, activists developed new forms of struggle. Creative activists developed community-labor alliances that fight for living wage ordinances, worker centers that organize immigrant workers not reached by unions, and alternative forms of action such as corporate campaigns and short symbolic strikes.

These efforts have been vital in keeping struggle alive during a period of union-busting and decline, imparting energy to the labor movement and developing new activists.

But based on these experiences, some labor theorists incorrectly conclude that the labor movement can abandon the workplace (and the strike) and focus on corporate-pressure and community strategies. While vital for building broad-based social unionism, community alliances cannot replace a strike that directly confronts employers and halts production.

We’ve done 20 years of corporate campaigns. Absent strikes that stop business as usual, they will never hit employers hard enough to fundamentally alter the relationship between workers and bosses. Unionism must be based on power and in particular the power to force a different distribution of wealth in society.

Unionists need a new approach. Labor law reform is stalled, public employees are under attack, and, while unions must organize or die, an organizing strategy alone has proved incapable of reviving the movement. To attract workers, unions must have the economic tools to improve their lives.

A common objection to reviving the strike is giant corporations’ ability to shift work abroad and thus withstand a strike in any one workplace. But global competition alone cannot explain the decline of the strike in trucking, meatpacking, construction, and other landlocked industries.

Still, global conglomerates are a reality. Unions face employers with deep pockets and the ability to withstand a strike at one of perhaps dozens of facilities in the U.S. and around the globe. Confronting international corporations requires an international approach.

But meaningful international solidarity requires the willingness to strike at home, so that U.S. unions have the tools and the power to contribute to the global struggle. A large part of the solution is to be willing to break the laws that limit solidarity.

In recent years, we have seen glimpses of struggles that attempted to redefine the relations between labor and capital: the meatpackers of Local P-9 at Hormel, miners at Pittston Coal, corn-processing workers at Staley.

Immigrant workers on May Day 2006 demonstrated the power of a national political work stoppage. UE members at Republic Windows showed that a sit-down strike can still win. A good example can set off a spark.

Finally, unionists must look at new forms of organization. Employers can attack unions by going after their assets. During the 2005 debates in the AFL-CIO, the Teachers (AFT) argued that unions should set up “organizing committees of start-up unions with no accumulated treasuries or bricks and mortar,” to engage in tactics that might violate labor law.

Just as employers use the corporate form to shield their actions, unions must determine the best forms of organization to protect their assets while using strike tactics that work.

Unionists cannot afford to be purists. Whether it’s a one-day strike or a publicity campaign, any method of fighting back and extracting gains is important and necessary in this era. In discussing the need to change the rules, the danger is promoting defeatism, which is the opposite of what the labor movement needs.

There is no instant answer. But after decades of declining membership, we must begin a discussion of the fundamentals of union power. When the labor movement rises up again as a powerful force in the United States, it won’t be as a result of legislation or of cutting deals with employers. It will be because workers have taken back their most powerful weapons—solidarity and halting production.

Joe Burns is a labor negotiator and attorney and a former local union president active in strike solidarity. The ideas expressed here are solely the author’s. A fuller treatment will appear in the Spring 2010 New Labor Forum and a future book, The Revival of the Strike and the Future of American Labor. Burns can be reached at joe [dot] burns2 [at] gmail [dot] com.

A version of this article appeared in Labor Notes #374, May 2010. Don't miss an issue, subscribe today.
Related
This Year I’m Thankful for the Revolt Against Two-Tier »
'We'll Never Be in This Position Again': Striking Deere Workers Hold Out for Better Deal »
Teachers Strike against a ‘Heartless’ School Board in Biden’s Hometown »
Viewpoint: Building Trade Unions Won’t Win Our Parking Fights Until We Catch the Striketober Spirit »
‘It Feels Like We Started a Movement’: Despite Mixed Results in Frito-Lay Strike, Workers Proud They Stood Up »