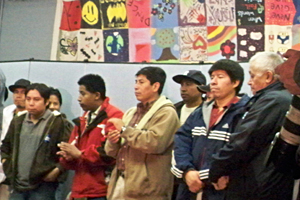 The workers caught up in the ICE dragnet held a press conference with community and immigrants rights organizers. Workers say they were paid as low as $5 an hour and were charged $7 a day for transportation. Photo: Camilo Viveiros, Rhode Island Jobs with Justice

The Immigration and Customs Enforcement fugitive operations team was on the hunt. Their roadblock struck gold in the wee hours of the morning January 6, snaring four vans full of immigrant workers heading from Rhode Island to Massachusetts to shovel snow at Gillette Stadium before the New England Patriots’ playoff game.

Being undocumented, the workers didn’t have driver’s licenses. So after processing them and scheduling immigration-status hearings, ICE agents drove them to work at the stadium.

ICE had set up a national-local partnership of local detectives and federal ICE agents. ICE claims the operation targeted immigrants who were evading orders for deportation, including some who were charged with crimes such as driving while intoxicated or domestic violence. The agents were chasing “specific fugitives,” says ICE spokewoman Paula Grenier.

But ICE swept up all 58 undocumented workers heading to the stadium.

Seven Guatemalan immigrants caught in the raid were marked for deportation beforehand. Two, ICE claimed, were fugitives, because they ignored a previous deportation order. Five had come back to the U.S. after being deported once before. Those workers are facing criminal prosecution.

The others were released after questioning and ordered to report to immigration hearings. Among them were at least six minors, as young as 14 years old, and a woman five months pregnant. Many of the Guatemalans are Mayans who speak the K’iché language, part of a community forced off their land following a brutal counter-insurgency in the 1980s backed by millions of dollars of U.S. war material and support.

Garcia says deportations are a numbers game for ICE, pointing to a memo disclosed in March in which a lower-level ICE official decried the pace of deportations, saying it was falling behind a goal of 400,000 annually.

Garcia said federal and state officials’ attention would be better spent taking an interest in the abusive conditions immigrant workers labor under. Workers say they were paid as low as $5 an hour on the clean-up crew, and were charged $7 a day for transportation. Workers say they weren’t paid on time, and that their employer, Legal Pro-Temps, didn’t follow state or federal labor laws.

Workers said they were allowed one quick break between 9:30 a.m. and 4 p.m. to drink water.

Gillette Stadium had contracted out cleaning work to Legal Pro-Temps since 2008, and canceled its contract with Pro-Temps after the raid. Spokesperson Stacey James dismissed any responsibility for subcontracted workers’ conditions or wage violations.

“I don’t believe for a minute that they didn’t know what was going on,” said Patrick Quinn, state council director of Service Employees 1199. “This is just another example of this upside-down economy, where a quarterback makes a million and these workers don’t get paid minimum wage.”

Some of the workers will be able to stay in the U.S. at least temporarily, as some hearings have been delayed till August, says Camilo Viveiros, director of Rhode Island Jobs with Justice. But he worries that some workers could be deported earlier.

In a radio interview, Gillette worker Martin Jimena Lopez said agents told them they could return to work after having their photos taken. But many of the Mayan K’iché workers don’t speak Spanish and didn’t understand what was happening.

“Everyone who’s been told they have nothing to worry about, just cooperate with the authorities,” says Viveiros, “are now facing arraignments and uncertainty over deportation.”

Rhode Islanders have been busy building financial, community, and political support for the workers, adds Viveiros, holding press conferences and weekly worker-organizing meetings with immigrant-based congregations and collecting letters of support for the immigrants to give to the judge.

The Gillette Stadium workers will be at the Labor Notes Conference to strategize with other immigrant workers and advocates how to push back against ICE.

“They told us they were just looking for people with criminal backgrounds,” Viveiros said. “Now they’re criminalizing them all.”

A version of this article appeared in Labor Notes #374, May 2010. Don't miss an issue, subscribe today.
Related
Michigan Nurses Defeat AFT-Backed Raid »
Viewpoint: A ‘Union’ That Pushes to Deport People Is the Labor Movement's Opponent »
Work Is the Reason Latinos Are Getting Slammed So Hard by the Pandemic »
Poultry Workers and Allies Organize in the Wake of Anti-Immigrant Raids »
Steward's Corner: How to Respond If a Member’s Work Authorization Is Challenged »