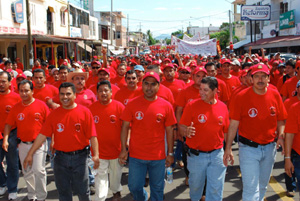 Members of the Mineros union march in August to celebrate the birth of their union 75 years ago. Now the Mexican government is colluding with mine owner Grupo Mexico to break a nearly three-year-old strike. Supporters fear a bloodbath. Photo: USW.

Class war in Northern Mexico, being fought in the Cananea copper mine, could soon turn much bloodier. After dissolving the militant Electrical Workers union in October, the Mexican government is now going after 13,000 striking miners, who are determined to hold their ground—and their mines.

The government is “going to try to take Cananea over by force, to eliminate the most powerful independent union in Mexico,” according to Jerry Fernandez, international relations director of the United Steelworkers union, which has worked closely with the miners throughout the strike.

If this happens, it may mean a bloodbath in Cananea, one of the largest copper mines in the world. Owner Grupo Mexico has declared that “the collective bargaining contract with the mining union from today on does not exist,” based on a court decision designed to break the strike.

The workers disagree. The courts did not allow the union to present evidence, accepting the company’s claim that the mine is inoperable—even though it has plans to reopen the mine as soon as the union is broken and the strikers are dislodged. In fact, Grupo Mexico’s chief financial officer predicted this week the mine would return to production by July.

Given this decision, the Steelworkers doubt the independence of the Mexican courts from the federal government’s offensive against independent organized labor.

The miners today in Cananea carry the legacy of their forefathers who struck the same mine in 1905. The murder of 27 miners that year fed working class anger that led to the Mexican civil war and the 1910 revolution—the centennial of which is being officially celebrated by the government this year.

In 2006, Grupo Mexico’s mine at Pasta de Conchos saw an explosion that buried 65 miners alive. The union had previously brought its safety concerns to the company. The miners’ bodies still lie under the rubble, and Grupo Mexico has not compensated the families. The union has called the incident “industrial homicide.”

Already three unarmed miners have been shot down by state forces when 700 agents invaded in 2008. Emboldened by the questionable court decision, Grupo Mexico is asking for the army to go in again.
“These miners are tough, they believe in their union, and they’re going to support their rights,” says Fernandez. The USW fears bloodshed will ensue.

The Steelworkers and other allies are calling on the Inter-American Commission for Human Rights, a branch of the Organization of American States, to condemn the planned attack and use international pressure to stop a possible massacre.

Please send appeals to Santiago Canton, executive secretary of the Inter-American Commission for Human Rights, urging him to ask the Mexican government not to use force against the Cananea miners, lest they become the mourned Cananea martyrs. Email Dr. Santiago Canton at cidhoea [at] oas [dot] org.

I sent an email to Dr Santiago Canton--I hope it helps - Jim T.