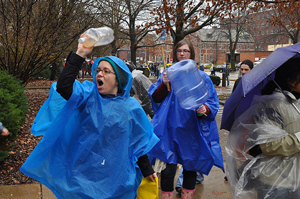 Graduate employees wrapped up a two-day strike at the University of Illinois at Urbana-Champaign after the university agreed to the union's key demands. Strikers said it shows that assertive unions can turn back the erosion of conditions on campus. Photo:Ben Seese.

Graduate employees wrapped up a two-day strike Tuesday at the University of Illinois at Urbana-Champaign after the university agreed to guarantee tuition waivers.

After nearly seven months of negotiations, the administration had offered language that would protect tuition waivers only for in-state students—a minority of the 2,600-person bargaining unit. The Graduate Employees Organization (GEO-Illinois Federation of Teachers Local 6300) struck to receive protection for all waivers.

The union argued that revoking or reducing tuition waivers for teaching assistants was like asking them to pay to work, and that tuition waivers are central to the land-grant mission of the University of Illinois, which includes providing higher education regardless of economic background.

If the university were to change its practice to only cover in-state tuition, GEO members would have paid as much as $13,000 per year.

About 23 percent of undergraduate classroom hours are taught by graduate students at the school, which enrolls about 31,000 undergraduates.

Teaching and graduate assistants were called to withhold all teaching-related labor, and four major buildings on the Liberal Arts and Sciences quad were targeted for picket lines.

The weather did not cooperate—it was rainy and miserable—but more than 1,000 GEO members turned out to picket lines, shutting down hundreds of classes.

They enjoyed an outpouring of support from other members of the campus community and from faculty, students, and labor activists around the country.

The strike began Monday with a 7:45 a.m. rally during which Kerry Pimblott, GEO’s lead negotiator, incited members to “shut this university down.” Hundreds of course sections were suspended, including dozens taught by faculty members who refused to cross GEO pickets. The lines were animated throughout the day, with members and supporters grooving to the beat of the GEO’s mobile drum corps.

The day ended with a march on the Swanlund Administration Building, where GEO member Rich Potter told the crowd that, despite the administration's claim that there was no disruption on campus, “it will never be business as usual at the University of Illinois until our tuition waivers are guaranteed.”

Some international graduate students, however, were made fearful of participating in the strike. Amber Cooper, a volunteer from the University of Michigan GEO, received a phone call from an international student who’d been threatened with deportation. Other international students came to the GEO office after receiving similar threats.

In addition to winning protection for tuition waivers through the strike, GEO secured an additional two weeks of unpaid parental leave and increases to the university’s contribution to health care premiums, upped from 50 percent to 75 percent in the third and final year of the contract.

“After seven months of negotiations and organizing, to be able to reach this agreement is an enormous feeling of satisfaction,” Potter said.

The deal also included raises to the minimum salary that total 10 percent over three years.
Minimum annual salaries for half-time assistants are $13,430 currently, and the union says 58 percent of members make less than its living-wage estimate, $16,000.

At the other end of the spectrum, Chancellor Richard Herman—who recently stepped down after an admissions scandal—gets to keep his $395,000 salary through June and enjoy a year’s sabbatical at a tenured faculty member’s $244,000 rate.

The strike put enormous pressure on the administration, and had a major effect in the bargaining room. On day two, with hundreds of GEO members braving even worse weather to continue to picket the quad, the administration’s bargaining team agreed to GEO's proposal on tuition waiver security almost immediately in a morning bargaining session.

“Our strike was about telling the university that it could not continually cut wages or tuition waivers, or allow the quality of education to erode, without a fight,” said Leighton Christiansen, a graduate student in Library and Information Science and GEO strike committee member. “Our victory will serve as inspiration for other groups of education workers across the country, such as the strikers in the University of California system who went out today. We can fight the quality erosion, cost cutting, fee increases, class-size increases, and we can win.”