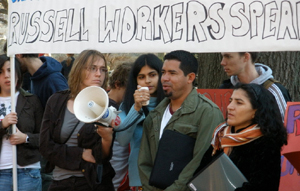 Student anti-sweatshop activists spurred a historic deal between the largest exporter of T-shirts to the U.S. and a garment union in Honduras. The victory injects hope into a movement eager for good news. Photo: USAS.

It’s not often that those involved in the anti-sweatshop movement have a clear reason to celebrate. Sometimes corporations refuse to budge regardless of how much pressure is placed on them, and sometimes a campaign resolves in a compromise that falls short of what was originally desired.

The recent agreement reached between the garment workers union in Honduras and Russell Athletics is not one of those cases.

After more than a year of campaigning, members of the campus-based group United Students Against Sweatshops and their allies have been successful in pressuring Russell to re-hire the 1,200 unionized garment workers at Jerzees de Honduras it had fired and to open up a new factory to replace the one it closed in 2008. Russell and its parent company, Fruit of the Loom, further agreed not to interfere with unionization efforts at seven additional Honduran garment factories.

According to Rod Palmquist, USAS international campaigns coordinator, the deal is “the first company-wide neutrality agreement in the history of the Central America apparel export industry—and it has been entered into by the largest private employer in Honduras, the largest exporter of T-shirts to the U.S. market in the world. This is a breakthrough of enormous significance.”

Trouble began in 2007 when workers at two Russell-owned factories in Honduras alleged that many of them had been dismissed because of their decision to form a union. The Worker Rights Consortium, a U.S.-based organization that monitors labor rights for universities, mounted an investigation after they received a complaint from the Honduran union federation Central General de Trabajadores on behalf of the workers.

WRC staff in Honduras interviewed dozens of current and former workers, government officials, apparel industry representatives and reviewed numerous factory and union documents. They discovered explicit statements by management that worker’s decisions to form a union would result in the factory’s closure. (See all the WRC reports on Russell here).

Russell offered re-instatement to the workers and about $150,000 total in back pay. But Russell then announced it was closing the Jerzees de Honduras factory in October 2008, putting 1,200 workers out of work, including a group of workers who had already been transferred there due to the closure of another factory.

United Students Against Sweatshops quickly formed a campaign to “Rein-In Russell.” The company supplied apparel to a majority of American and Canadian universities, although exact numbers are hard to come by because not all schools have forced the companies that supply their licensed apparel to reveal where they get it from. Disclosure of factories only started in the early years of this decade, after titanic battles on campuses that involved sit-ins, building takeovers, and other aggressive tactics.

Of schools that have affiliated with the WRC and must provide a list of their licensees, more than 100 listed Russell.

PROVE YOU MEAN IT

The campaign against Russell was one of the largest in the sweat-free movement’s history. USAS campaigns use students’ power on campuses to hit companies abusing workers where it hurts: university apparel contracts. In all students forced 96 U.S. universities, some with contracts worth more than $1 million, to cut ties to Russell.

Holding rallies, demonstrations, and a few sit-ins, students challenged their universities to uphold the codes of conduct they sign with apparel suppliers, which ban the kind of abusive treatment brought to light in Honduras.

Students didn’t have to resort to the most militant tactics to accomplish their goals this time. While previous campaigns have seen actions like a 27-day hunger strike in 2006 at Purdue University, this one was marked more by efforts to raise the visibility of the workers’ struggle. By passing out flyers in busy shopping mall stores, accosting university presidents on campus, and dropping huge banners off buildings, USAS made the allegations against Russell hard to ignore.

The students organized mass emails, phone-calls, and faxes to target key decision-makers and helped bring workers from the Jerzees de Honduras factory to tour the U.S. to speak about their struggle themselves. USAS members are quick to point out that their strategy, founded on building solidarity with workers on the ground, wouldn’t have done much without the Honduran union's decision to fight against Russell.

While students were agitating on campus, fired workers in Honduras held protests and vigils outside Russell factories calling on the company to respect their right to organize and stop lying about the reasons behind the factory closure.

And through USAS’s international intern program, students work on the ground with unions organizing in the apparel sector, to develop the relationships and solidarity that hold campaigns together for the long haul.

The students and Honduran workers were determined not to let Russell off the hook. The students got hefty contracts cut at nearly all of the Midwest’s Big Ten universities and the entire University of California system, putting Russell in a position where they had little choice but to make a deal.

Russell was more susceptible to the pressure, because it relies more on the university apparel market than other large apparel corporations. And unlike Nike or Rebook, Russell actually owns its Honduran factories, instead of buying its clothes from contracted suppliers.

That gave the workers more bargaining power, and some relief from the relentless pressure that big apparel companies exert to chop how much they pay for products.

Scott Nova, director of the Worker Rights Consortium, cautions against overestimating how much Honduran workers have gained, however.

“They’re doing this in a country with limited respect for workers’ rights, a problematic political climate, and a corporate culture where—if you can imagine it—there is an even more intense anti-union animus than in the U.S.,” Nova said.

Nova noted that the coup government that deposed President Manuel Zelaya in June has assigned officials hostile to unions in the labor ministry.

He argues that conditions in the industry won’t change until apparel companies are made to understand that playing countries and factories off of each other, and squeezing workers to the bursting point in the process, is a business model that can change, not some unquestionable “God-given writ.”

Resistance among industry forces and university leaders has stalled a long-running drive by anti-sweat campaigners to sign schools onto a Designated Suppliers Program. It would require schools over time to source their licensed apparel from factories where workers receive a living wage and have the right to organize.

Still, the victory against Russell is significant for many reasons. In the apparel industry it is extremely difficult to get a company to re-open or re-establish a factory after it has closed its doors. It is also very difficult to get workers who were fired for union organizing back into a factory. Garment-makers are notorious for closing a factory to avoid worker agitation or new tax burdens, simply opening up another one nearby with a different name.

“This is the first time we know of where a factory that was shut down to eliminate a union was later re-opened after a worker-activist campaign,” Palmquist said.

This victory sets a precedent for future campaigns, as workers and activists can now say to other companies: if Russell can do it, why not you? A decade ago when Nike finally agreed to disclose its global supply chain, it had a similar effect on other companies still holding out.

Campus codes of conduct have been in force for 10 years, but sweatshops continue to proliferate, leading many sweat-free activists (myself included) to question whether they are effective.

The win at Russell, however, shows that codes of conduct can be useful tools to fight back against corporations and win significant gains for workers. But they can only take things so far. To win requires courage, solidarity, and most of all, unflagging resolve. Clearly the Honduran union, and their partners on North American campuses, brought all that and more.

Amanda Wilson is a former Canadian organizer with United Students Against Sweatshops. Mischa Gaus contributed to the piece.

For a full copy of the agreement between Russell and the Honduran union, see the WRC's website.

A version of this article appeared in Labor Notes #369, December 2009. Don't miss an issue, subscribe today.
Related
Interview: A Mexican Auto Worker on the Fight for a Real Union at GM's Silao Plant »
Bottom-Up Labor Solidarity for Palestine Is Growing »
Captured by the Flag »
Global Cleaning Workers Share Their Struggles as the First Line of Pandemic Defense »
Military Targets Workers as Repression Escalates in Myanmar »