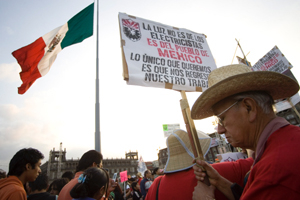 Tens of thousands of Mexican workers joined a national work stoppage to reverse the liquidation of the independent Electrical Workers union, but despite large and militant protests, its seems unlikely the government will be moved. Photo: Demian Chávez|Agencia Inqro.com.mx

Tens of thousands of Mexican workers joined a national work stoppage on November 11 to pressure the Felipe Calderón government into reversing its seizure and liquidation of the Light and Power Company.

Benedicto Martínez, one of the three co-presidents of the independent Authentic Labor Front (FAT), told Labor Notes that the demonstrations in Mexico City were large and enthusiastic. “I believe that if workers resist and if the movement continues to grow things can change," he said, adding a call for continued coalition-building and international solidarity, "perhaps in the form of demonstrations at consulates in other countries.”

Yet, despite the size and militancy of the protests, and the union’s view that the national work stoppage was a success, there seems little likelihood that the government will be moved.

The takeover of the power company last month was accompanied by the firing of about 45,000 workers and the dissolution of the Mexican Electrical Workers (SME) union, an independent union that had been a leader in the fight against the government’s corporate-oriented agenda.

While members of the union were themselves unable to strike this week, having been physically forced out of their workplaces by the police, they did march, demonstrate, and join protests, and other workers struck and protested on their behalf.

Striking workers blocked highways in several states, surrounded and closed down government buildings in Mexico City, tied up the capital’s streets, and then marched by the tens of thousands to the zócalo, the national plaza, for a protest rally. The government mobilized 10,000 police to respond to the protest and in Queretaro there were violent confrontations between police and strikers.

Calderón claimed that there had been attempts to shut down power in Mexico City and the surrounding states, but the union attributed power failures to the incompetence of those now running the plants.

Even as the strike took place, several cabinet secretaries repeated the government’s position that the company closing, the firing of the workers, and the elimination of the union are permanent.

Speaking at the rally in the zócalo, Martín Esparza, head of the Electrical Workers, called upon Secretary of Labor Javier Lozano to “pick up his severance pay and get out.” That, in effect, is what Lozano himself has been telling the fired Electrical Workers.

So far, according to media reports, more than half of the fired workers have received their severance pay, suggesting that they have given up the struggle to get back their jobs. A leader of the Electrical Workers says that far fewer, about 10,000, have accepted their severance. The union, nevertheless, continues to mobilize members and to fight both in the courts and on the streets to reverse the government’s decision.

Esparza called for the movement to continue with a national general strike before the end of the year. Unlike many other Latin American countries, Mexico has never had such a general strike.

Last week a federal judge, responding to a petition from the Electrical Workers, issued an order stopping the Federal Labor Board from carrying out the liquidation of the company, though that decision may ultimately have no impact. The Legislative Assembly of the Federal District also filed a case before the Mexican Supreme Court in an attempt to stop the liquidation.

The president of the Supreme Court, however, declared that the assembly, similar to a state legislature in the U.S., has no business intervening in the fate of a federally administered institution, such as Light and Power. With that attempt stymied, the Hidalgo State Legislature plans to submit another petition to the Supreme Court seeking to block the government’s action.

A solid core of Mexico’s more militant union groups came out in support of the electrical workers. Telephone workers, university workers, miners and metal workers, and a dissident caucus within the Mexican Teachers Union all participated in the strike. Equally important has been support from Andrés Manuel López Obrador, who, after losing a 2006 election he says was stolen, set up a shadow government that attracts significant support from the country’s working people.

Former Light and Power workers who are now seeking new employment complain that they are being blacklisted because they were members of the Mexican Electrical Workers union.