Staley: The Fight for a New American Labor Movement 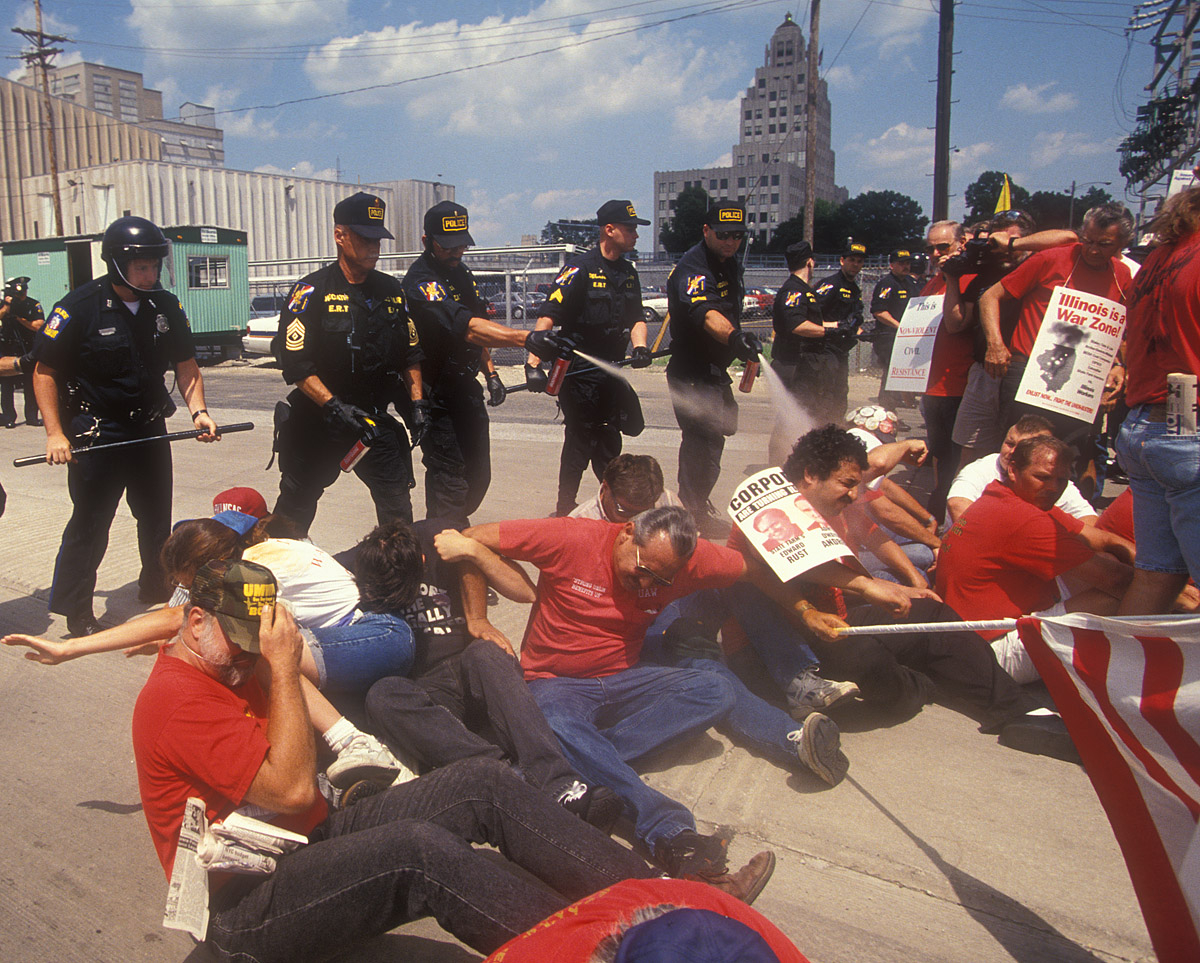 Police used pepper spray on Staley workers peacefully sitting in the driveway of the plant to protest the lockout. Photo: Jim West

I was a student and aspiring labor journalist when I volunteered for picket duty with the locked-out workers from A.E. Staley Co., the giant corn processing plant in Decatur, Illinois. By then, 1994, the lockout was already months old and much of the action was taking place far away from the plant, as the “road warriors,” union members turned activists, crisscrossed the country to spread the word about the labor struggle that had turned their central Illinois town into a war zone.

The round-the-clock picketing operations were often quiet, which meant that there was plenty of time to talk. Tape recorder at the ready, I was consumed by a single question: how was it that these factory workers had been transformed into militant fighters?

Steven Ashby and C.J. Hawking examine the transformation that occurred among the members of Allied Industrial Workers Local 837 in astonishing close-up. The authors, who were themselves deeply involved in Staley solidarity efforts, conducted scores of interviews in order to chronicle the workers’ hard-fought efforts to resist the concessions sought by the company’s new owner, Tate & Lyle, the largest sugar conglomerate in the world.

Staley worker Barrie Williams articulates the sentiment that so many of his fellow union members seemed to have shared: “They put our back right into that corner. And there wasn’t any other way to go: you had to fight to get out.”

More than 15 years later, the Staley story still retains the power to shock anew. Tate & Lyle’s determination to strip from the workers wages, benefits, and safety protections won over decades (mandatory 12-hour rotating shifts were a centerpiece of the company’s demands) seems like ghoulish overkill: a multinational with operations in 27 countries intent upon destroying an aging industrial union, composed of 762 mostly aging workers.

But it’s the inspiration of the Staley workers’ response that resonates through these pages.

The three-year campaign that would take them across the country and see them emerge as a powerful challenge to the calcified leadership of the AFL-CIO began back in 1992 as a contract fight. Union leaders summoned labor educators from all over the Midwest to teach members about the corn processing industry and the ins and outs of fighting back. They retained corporate campaigner Ray Rogers (whose $28,000 per month salary seems no less eye-popping today) and brought in Jerry Tucker of the UAW to help them conduct a textbook example of working to rule.

After the members were locked out by Tate & Lyle, they took their cause on the road, lighting a fire under unions far from Decatur and inspiring a new generation of labor activists. The book could function as a how-to manual of these tactics. So powerfully do Ashby and Hawking render the workers’ stories—the book draws upon interviews with some 50 Staley workers and their spouses—that readers can be forgiven for believing that justice might just triumph after all.

One roots for the workers anew, hoping that this time around, the little guys (and gals) will succeed: that the ranks won’t split and that spirit and solidarity will be enough to counter institutional inertia, within both their international and the AFL-CIO.

Of course that’s not how Staley ends; it can’t. Let down by their own international, disappointed by the AFL-CIO under the brand new leadership of John Sweeney, and facing increasing division within their local over staying out or giving in, the Staley workers’ struggle officially ended in December 1995, when, by a vote of 286-226, members accepted the company’s offer and returned to work.

The authors show clearly how the fight could have been won and what was wrong with the labor movement that allowed them to lose.

But how does the story really end? Ashby and Hawking’s account is one of personal and political transformation, and it is impossible not to wonder about the workers who saw their lives transformed through this struggle.

For these factory workers turned unlikely militants who wouldn’t—or couldn’t—go back to their old jobs, their old lives, what happened next? A “where are they now?” section on the authors’ website helps. But the question lingers long after the authors’ masterful account has reached its conclusion.

Jennifer Berkshire is the editor of the AFT Massachusetts Advocate. To order Staley, click here.]